June 28, 2017
Kirsten Schmitz
All teachers deserve a secure retirement. But under today’s current teacher retirement savings plans, more than half of all new educators won’t qualify for even a minimal pension benefit. We took a state-by-state look at public teacher retirement plans, and the findings were dismal.
Funding
Mobility and Portability
State Pension Plans
Read more

Another Billion for California’s Schools but Don’t Celebrate Yet

Do Late-Career Salary Bumps Help Retain Teachers? Not According to Their Pension Plans 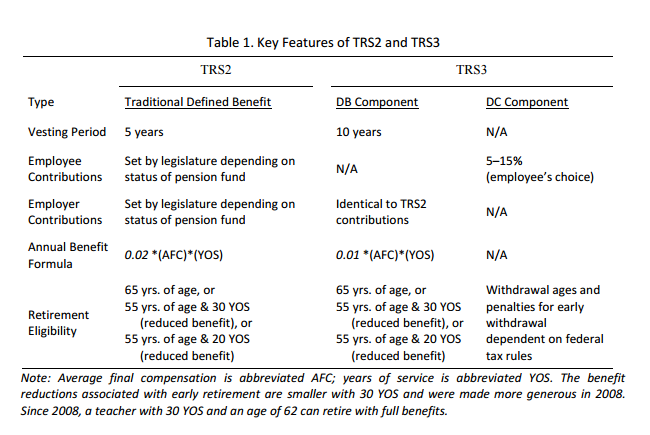 March 10, 2017
Max Marchitello
Puerto Rico’s pension system is an accelerated example of pension problems in the rest of the country. This is where many states are headed if they don't make reforms now.
Funding
Pension Politics
State Pension Plans
Read more

February 22, 2017
Chad Aldeman
How good is Iowa’s pension plan for the state’s teachers? Are there other alternatives that could provide better benefits?
Alternative Models
Mobility and Portability
State Pension Plans
Read more

State-based teacher pension plans are important. They make up an enormous portion of local K-12 budgets, and the vast majority of them are underfunded. But despite their weight, or maybe as a symptom of, the intricacies of these systems can be difficult to navigate. The National Council on Teacher Quality’s recent report, Lifting the Pension Fog, works to demystify the topic. The NCTQ team, in partnership with EdCounsel, collected teacher retirement data from all 50 states and the District of Columbia. We’re eager to build on their work in a forthcoming piece; they’ve provided a lot to work with. One data point that stands out though, is rising contribution rates.

NCTQ researchers found that just eight states have reasonable contribution rates – which they define as a combined contribution rate of 10-15 percent of salary. Unfortunately, a significant portion of pension contributions today are going toward debt costs – not to teachers themselves (see Figure 3 here). We’ve written about this before, but the short of it is that today’s new teachers are paying for years of pension system underfunding in the form of lower benefits and stagnant salaries. State pension debts are posing risks to hiring and retaining a quality teaching workforce.

As the graph shows, the total contribution rates are daunting. The average is now 24 percent, and states like Pennsylvania, Kentucky, and Illinois are all contributing over 40 percent of a teacher’s salary into their state retirement system. Other states are heading in that direction. Both teacher and employer contributions have been trending upward. Since 2008, 30 states have increased teacher contributions. In 1982, only 13 state plans had employee contribution rates of 7 percent or above. Today, 29 do.