What Might Explain the Gender Pay Gap Among Illinois’ Educators? Part II

As we have written about before, female educators in Illinois earn on average $7,775 less than their male colleagues. This disparity in salary translates into average annual pensions that are $3,800 less valuable. In a recent blog post, I found that at least some of the salary and pension gap is derived from the fact that most female educators work in elementary schools, which have lower average salaries compared with high schools where most men work.

In this post, we will look into whether different rates of educational attainment among men and women contribute to the salary gap. This is an important question since in most school districts teachers can earn a significant salary increase, the so-called “master’s bump,” once they earn their master’s degree.

As shown in the graph below, there’s a gender salary gap (the orange line) even among educators with one year of experience, and the gap steadily increases over time, and growing to $12,567 among those with exactly 30 years of experience. The pattern on educational attainment (blue line), on the other hand, shows a different trend: women tend to hold master’s degrees at slightly higher rates at most experience levels. 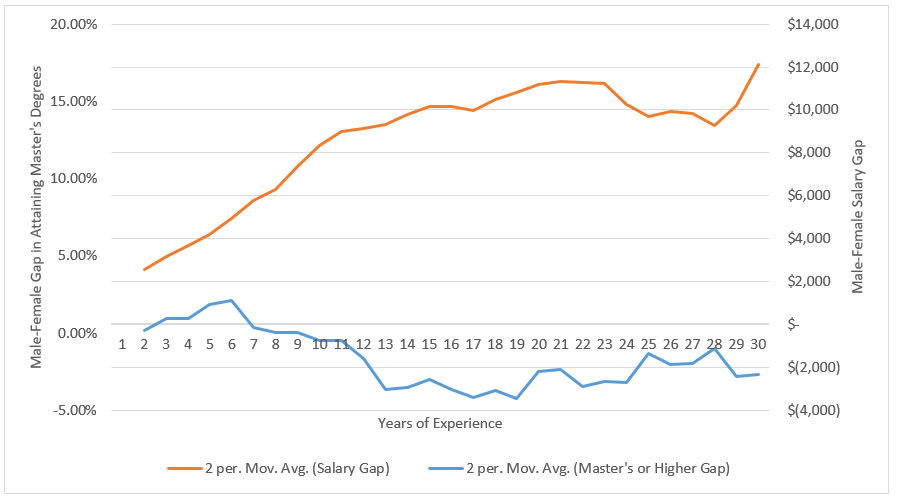 In the end, educational attainment does not explain why there is a large and persistent pay gap between male and female educators in Illinois. We will further explore other features and potential explanations of the gender-pay gap in future posts.