What Might Explain the Gender Pay Gap Among Illinois’ Educators? Part I

Even though most educators are women, their salaries nevertheless lag behind their male colleagues. In a recent report, I analyzed educator salary data in Illinois and found that women – at every experience level – earn lower salaries than men. On average, a female educator earns $7,775 less than her male colleagues. The problems don’t end there. These lower salaries translate to lower pensions as well. The typical female educator’s annual pension is valued at $3,800 less.

Unfortunately, finding a gender pay gap isn’t altogether surprising. However, it does mean K-12 education isn’t inoculated to gender-based disparities by district salary schedules that regulate how much educators can earn based on tenure.

So what might explain these gaps? Although there no perfect answers, through a series of posts I will look into potential causes. Today’s piece is about differences across grade levels.

Aside from the “parenting penalty” that disproportionately and adversely impacts the earning potential for women, one reason women on average earn lower salaries and pensions is that they work overwhelmingly at the elementary level. The majority of men, on the other hand, work in high schools. As shown in the graph below, average salaries are significantly higher in high schools than in any other grade span. 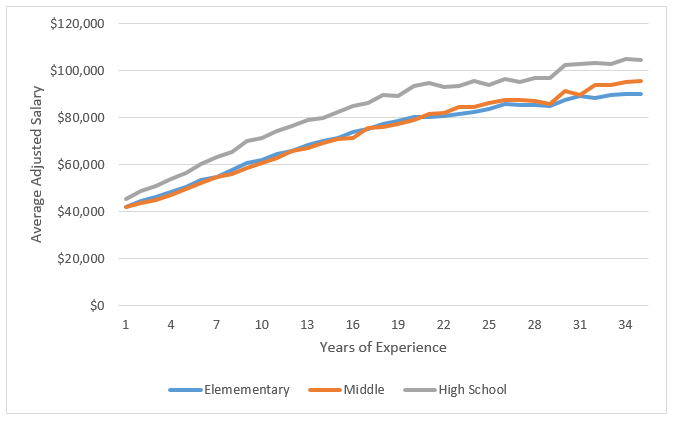 Around three-quarters of all educators in Illinois are women. And among women, 42 percent work in elementary schools, while only 17 percent work in high school. Comparatively, 47 percent of men work in high schools. This distribution contributes to the gender-pay gap among educators in Illinois. This may be due to greater extra earning opportunities at the high school level through clubs and athletics. Or, there could be a higher concentration of advanced degree holders in the upper grades. Illinois also has the most single-school districts in the country, which have significantly higher costs. It is possible that a disproportionate number of these districts may be comprised of high schools.

We will further explore features and potential explanations of the gender-pay gap in future posts.