What Happens When a State Gets Rid of Its Teacher Pension Plan? Evidence from Alaska

Our news cycle is lightning quick. Proponents and naysayers alike are often loudest just prior to a policy change’s implementation, before moving on to tackle the next one. But what happens after the dust settles? Were the changes as meaningful as supporters hoped? Were ramifications as cutting as detractors warned? We don’t always get the chance to go back and check.

Alaska’s 2005 teacher pension system reform legislation provides a unique opportunity to do just that. We’ve collected pre and post reform data to examine teacher workforce impact in the wake of retirement plan changes. While it is important to note that these trends should not be interpreted as causal, we feel there are meaningful takeaways all the same.

But first, some history. In a 2005 special session, the Alaska state legislature passed retirement reform laws, effectively freezing the state’s existing defined benefit pension plan, and enrolling new employees in a 401(k)-styled defined contribution plan. The state faced a $5.7 billion unfunded liability, and while changing the plan structure would not eliminate that debt, it would prevent it from snowballing further. Critics were concerned that the switch would cause teachers to leave the profession in droves, or never enter it at all, citing pensions as a key recruitment and retention incentive.

So what actually happened? Not much. The table below tracks the average Alaska teacher salary, the number of teachers in the state*, and the percentage of Alaska teachers leaving their district in a given year. The 2005-06 school year is highlighted to denote the policy change. Alaska’s average teacher salaries have risen steadily from 2002 to 2012. The number of teachers has fluctuated over that time, but remained largely consistent.

And teacher turnover, one of the biggest concerns going into the reform, has remained steady as well. The chart below tracks the percentage of Alaska teachers who left their district each year (including those who leave the profession entirely or moved to a different school), and highlights the new hire cohort first enrolled in the new retirement system. Warnings of dramatic teacher shortages in the wake of retirement plan changes have not come to pass. 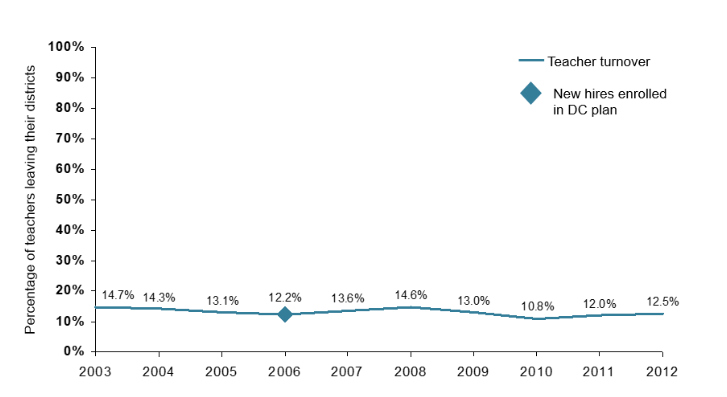 This is not to say that Alaska’s reform is a perfect exemplar. The DC plan sets decent contribution rates, with a mandated 8 percent employee contribution and a 7 percent employer contribution, but in passing the 2005 reform legislation, the state missed an opportunity to extend Social Security coverage to its teachers. As a result, Alaska teachers continue to be uncovered, putting their retirement security at risk. The plan isn’t ideal, but it does offer better benefits to a larger group of mobile workers, and it should help keep the state’s finances stable over the long-term.

Pensions make up an increasing portion of a state’s education spending and any changes to the plans must be balanced to both do right by new hires as well as uphold promises made to existing employees. There are no easy answers, but taking opportunities to examine results in case studies like Alaska allow future policy makers to cut through some of the discourse.