Assumptions are a key component of any pension plan. Pension plans make assumptions about future rates of retirement, withdrawal, salary, mortality, in addition to other characteristics about the retiree pool. To ensure the accuracy of these assumptions, state retirement systems conduct regular “experience studies” to compare their assumptions with data about the actual numbers observed on the ground. Experience studies help ensure the accuracy of a plan by measuring any fluctuations in the field and proposing subsequent adjustments to plan assumptions.

We unearthed over two decades worth of experience studies from the North Dakota Teachers’ Fund for Retirement (TFFR).
North Dakota, like most states, offers a traditional defined benefit public pension plan. Under the defined benefit plan, teachers receive a pension based on the number of years taught, final year salary, and a multiplier. In order to be eligible for a pension, teachers must meet a minimum number of years of service or a vesting requirement before they receive rights to a pension. In North Dakota teachers employed before July 1, 2008 were required to work three years before becoming eligible for a minimal pension. This is called the “vesting” requirement. Teachers employed on or after July 1, 2008 must serve five years before being eligible for a pension. Most states have either a five- or ten-year vesting period.
Below is a chart tracking the changes over time of 25-year-old female teachers who qualify for at least a minimal pension benefit. The data comes from experience studies issued by the North Dakota Teachers’ Retirement Fund over nearly 25 years. 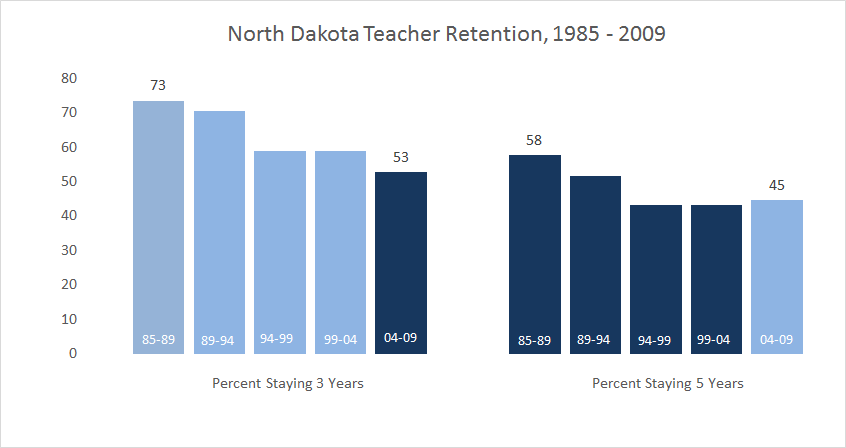 Source: North Dakota Teachers’ Fund for Retirement Experience Study Reports, 1985 -2009
The chart shows that North Dakota teacher retention has declined for early-career teachers over the last twenty five years. More teachers are either leaving the profession or moving outside of North Dakota. Where 73 percent teachers stayed in the classroom for three years during the 1980s, by the 2000s roughly half of teachers remained. Similarly, the five-year retention rate dropped from 58 percent to 45 percent.
The light blue bars highlight North Dakota's vesting requirement for teachers to earn a minimal pension benefit. Over the course of this period, North Dakota actually made it harder to qualify for a pension by lengthening its vesting requirement from three years to five. Combined with the rising attrition rate, the percentage of teachers who earn a pension in North Dakota has fallen from 73 percent in the late 1980s to only 45 percent today.
The next graph shows the other end of the spectrum, the percentage of teachers who will stay teaching in North Dakota for a full career and reach the "normal" retirement age set by the state.

Source: North Dakota Teachers’ Fund for Retirement Experience Study Reports, 1985 -2009
Under North Dakota’s pension rules, the normal retirement age is 65. Teachers hired before July 1, 2008 can also qualify for full retirements before age 65 under what is called the “Rule of 85.” That is, a teacher can receive full retirement benefits if her age plus service years equals 85. Hence, someone who begins teaching at age 25 is eligible to retire at age 55 when she has accumulated 30 years of service (55 + 30 = 85). Teachers hired after July 1, 2008 can retire with an unreduced benefit under the "Rule of 90." Using the same math as before, a teacher who starts at age 25 now must wait to retire until she reaches at least age 58, when she has 33 years of experience (58 + 33 > 90). In other words, North Dakota not only made it harder to qualify for a minimal pension benefit, they also made it harder to earn a full, unreduced benefit.
That change means fewer teachers will qualify. In the 1980s and 90s, just under a quarter of North Dakota teachers remained long enough to receive full retirement benefits. These teachers stayed in the system long enough to not only meet initial vesting requirements, but also accumulated enough service years to actually receive an unreduced pension. Now, with the longer requirement, only 23 percent qualify. North Dakota's policies have created a smaller pool of winners and many more losers.
North Dakota is currently ranked as the fastest growing economy in the U.S. Home to a booming oil industry, North Dakota now boasts a GDP that is 29 percent over the national average, according to the U.S. Energy Information Administration. Just last spring the North Dakota legislature approved over $2.1 billion for the state K-12 education budget to cover education costs for its growing population. But at the same time, the North Dakota pension plan is only 60.9 percent funded, which places it amongst the twenty most underfunded pensions. Policymakers should take note of the large mismatch between the state’s booming economy and its struggling teacher pension system.
Taxonomy:
Pensions and Human Capital
Retirement Insecurity
State Pension Plans