Teacher pension costs in Maryland grew from 5.8 percent of the state’s K-12 education budget in the 2004-05 school year to 8.2 percent by 2017-18. In dollar terms, last year the state spent on average $1,149 per pupil on teacher retirement benefits, up from $542 in 2005 years ago. This problem is not unique to Maryland. Across the country teacher retirement benefit spending comprises a larger and larger share of education spending.

The growth in Maryland’s teacher pension spending far outpaced increases in the state’s overall K-12 spending. Between 2005 and 2018, the state increased general elementary and secondary education spending by about 50 percent, while pension spending more than doubled.

Spending on teacher salaries in Maryland is slightly regressive

The consequences of rising pension costs are not felt evenly across the state. Indeed, teacher pension spending actually increases inequities between high and low poverty districts in Maryland. This happens because pension wealth is a function of a teacher’s years of experience and salary, and school districts serving higher concentrations of students from low-income communities typically pay lower salaries and often have higher turnover. As a result, any gap in salaries across districts echo in a state’s pension spending.

As shown in the graph below, per pupil spending across Maryland’s 25 school districts is slightly regressive. In other words, more affluent school districts spend a bit more per pupil in instructional staff salaries. For example, Baltimore City spent (the yellow dot) on average $4,330 per pupil compared with $4,714 in the considerably wealthier district of Baltimore County (the purple dot). 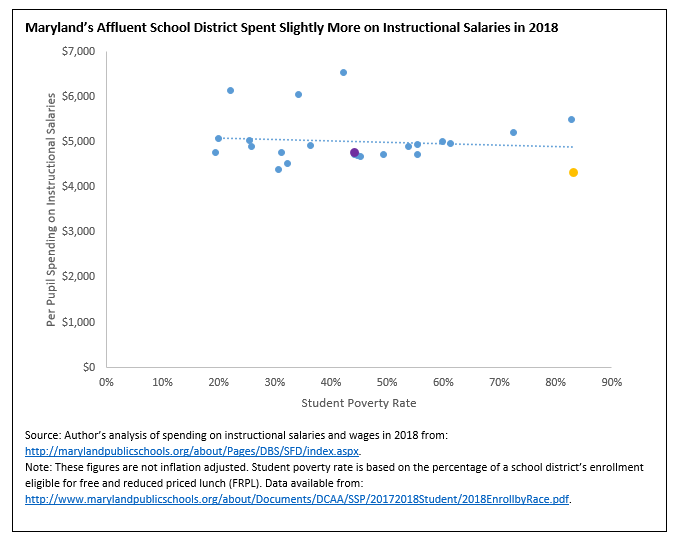 In Maryland, the state operates only large, county-wide school districts, so it is likely that some school-level variation is diluted by the inclusion of so many schools – often from dissimilar communities – in a single district.

Even though analyzing district-level data is limiting, the impact of pension spending across district inequities is nevertheless evident. In the graph below, I sorted Maryland’s districts into quintiles based on their student poverty rates. As shown below, pension spending exacerbates existing salary gaps.

Maryland’s school districts with the lowest concentration of student poverty serve 16.6 percent of the state’s total student enrollment and spend on average $5,183 per pupil in instructional salaries. The state’s districts with the most significant student poverty serve 26.4 percent of students in Maryland, but spend nearly $180 less than the most affluent districts. While that may not seem like a large gap, across a school of only 500 students, it leads to a $90,000 cumulative disparity – enough to pay for an additional veteran teacher, or perhaps two early-career support staff. 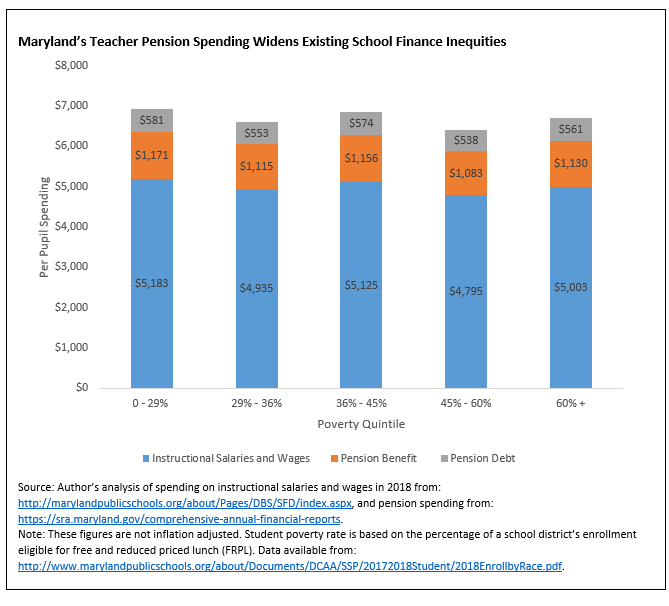 Since teacher pension spending is determined by a formula based in large part on salary, layering per pupil pension spending on top of the existing inequities leads to an even greater disparity. In terms of total compensation – salary and benefits – Maryland’s most affluent districts spend $6,935 per pupil, a gap of $241 per student as compared to schools with the highest poverty. Accounting for pension spending amplifies the total spending gap by 34 percent. In the same school enrolling 500 students, the total compensation gap amounts to a disparity of $120,500.

The additional inequities in school funding produced by teacher pension spending has been getting worse over time. This is partly driven by the rising debt costs of the Maryland teacher pension system. Failing to consistently meet the annual actuarially required contribution rates to keep up with pension obligations, falling short of investment return projections, or a combination of the two, increased the state’s unfunded liability. In response, the state increased its total contribution rate to keep pace with their pension commitments to retirees.

Maryland’s spending on teacher pension debt is based on a flat percentage across the state. Regardless of district, 11.21 percent of teacher salary in 2018 was spent to pay down the pension system’s debt. While there is some appeal in this approach, “charging” all districts equally ignores important differences across districts and can unintentionally create a greater burden on high-poverty districts. These districts typically have greater teacher turnover and a lower share of long-term veteran teachers who draw down the most valuable pensions in retirement. In other words, they’re accountable for a smaller share of the state’s total teacher pension debt.

Moreover, low income districts have a harder time generating revenue for their schools. This means that spending the same as affluent ones can actually consume a greater share of their total school funding. To illustrate this point, consider a $100 parking ticket. Every ticketed person owes the same amount of money to the city, but the financial burden of that citation is far less for a corporate lawyer than it is for a barista. In other words, equal cost can still produce inequitable results.

While spending on pension debt can actually create a greater financial burden for low-income districts, Title I of the Elementary and Secondary Education Act (ESEA) is structured to provide greater funding to districts serving the highest concentration of low-income students. The problem is that in Maryland spending per pupil on pension debt has far outgrown Title I funding, In other words, pension debt costs in the state are now so large that they overwhelm investments to support the education of the state’s low-income children.

As shown in the graph below, pension debt costs rose considerably, while Title I revenues remained flat. In 2005 the average per pupil debt cost of Maryland’s teacher pension fund was roughly comparable to Title I.  But last year, Maryland on average spent $570 per pupil on pension debt while receiving only $221 in Title I. Put another way, federal investments in education to mitigate the adverse effects of concentrated student poverty amount to less than half of what to the state is paying toward its own teacher pension debts. 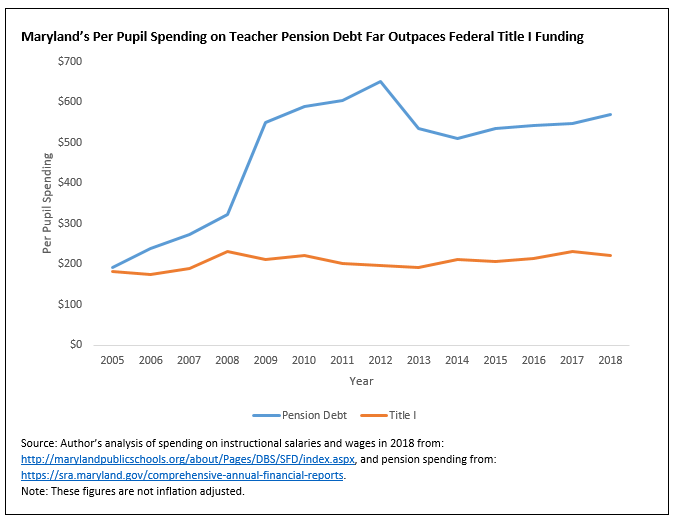 Not every district receives the same amount of Title I dollars per pupil. This is because the federal government allocates these funds somewhat progressively, with higher poverty districts receiving greater support per pupil than more affluent ones. The idea is to provide greater financial support to students who attend high-poverty schools and typically face more significant challenges. Pension debt, however, undermine that effort. As shown below, pension debt costs are far greater than the amount of Title I per pupil funding a district receives. Even in Maryland’s highest poverty districts, average pension costs are significantly greater than average Title I funding.  As a result, the state’s pension spending blunts the effect of federal education spending designed to provide greater support to high-poverty school districts. If Maryland were to improve the financial health of its teacher pension system, students attending high-poverty districts would receive greater per pupil funding overall even if the state didn’t increase the equity of its own school funding system. 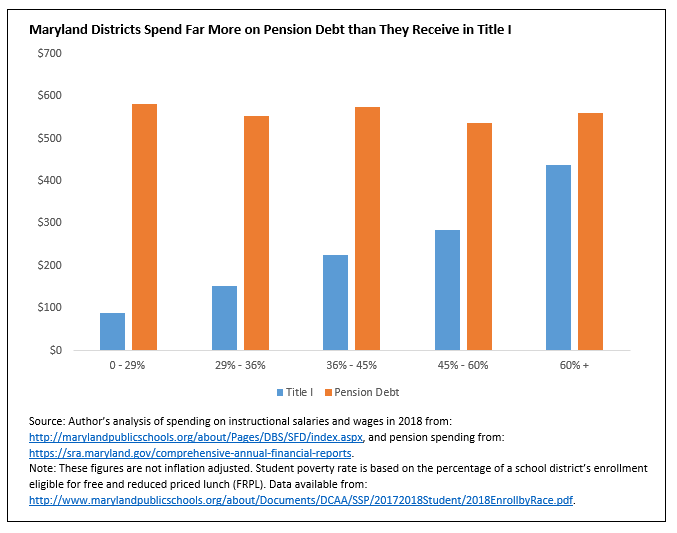 The graph above makes clear that pension debt costs are greater than Title I revenues in Maryland school districts. However, it would be a mistake to interpret these data to suggest that despite considerable pension costs, high-poverty districts nevertheless receive greater funding due to the progressivity of Title I’s allocation formulas. There are two key problems with that interpretation.

First, there are Title I fiscal requirements designed to ensure that federal funds are layered on top of state and local funding that are already at least equal among high and low poverty schools. In other words, using federal funds to make up for inequities in state or local funding is in violation of the federal law. Unfortunately, Maryland and many other states fall short of that minimum standard.

The second issue is that even the inclusion of Title I funds can be insufficient to overcome spending gaps between high- and low-poverty districts. Consider Baltimore City and Baltimore County. The city has an 83 percent student poverty rate, while the county has a poverty rate of 44 percent. The large difference in the concentration of poverty between the districts results in a wide gap in Title I funding. However, as shown in the table below, receiving nearly three times as much Title I funding per pupil still does not overcome the salary and pension spending inequities.

The total salary and benefits gap between Baltimore City and County, excluding Title I, is $471 per pupil. Pension spending increases the salary-based disparity by 23 percent. Layering Title I on top of that funding context, even with Baltimore City receiving so much more per pupil, is not enough to overcome the existing inequity.

In Maryland, teacher pension spending is yet another way that fewer dollars are spent to educate students from low-income backgrounds than are spent on affluent students. And while teacher retirement is not typically at the forefront of school finance equity debates, pensions represent a considerable and growing education expense that often exacerbates existing inequities.

What can be done?

To mitigate the adverse effect pension spending has on school funding equity would require significant reforms, such as creating greater pay teacher pay equity among districts; and, more evenly distributing higher-paid, experienced teachers across the state rather than concentrating them in suburban and lower-poverty areas.

But those are long-term goals. For a shorter-term project, Maryland should focus on getting its rising debt costs under control. One strategy is to lower the assumed rate of return on the investment of the pension funds. When Maryland misses the mark, even by a fraction of a percent, the consequences for the state’s education system’s funding can be significant since they’re investing tens of billions of dollars. When this happens Maryland’s plan’s debt increases since there are fewer aggregate dollars in the fund.

Although decreasing the assumed rate of return will help the health of Maryland’s state teacher pension fund over the long-term, it will have the short term effect of rising pension costs and exacerbating inequities. To mitigate this consequence, Maryland could shift the burden of pension debt costs to the state entirely rather than as an effective tax of teachers’ labor at the district level. Taking this approach won’t solve the problem immediately, but it will help Maryland reduce its teacher pension debt overtime.