Problems with Retention: How Teacher Turnover and State Pension Systems Combine to Exacerbate Inequities across Districts

Earlier this month I wrote a piece showing how state pension formulas exacerbate teacher salary gaps across districts. Due to the way pension benefits are calculated – relying so heavily on salary and experience – a pay disparity between teachers with the same number of years of service will be compounded in retirement. Moreover, pensions are yet another way that more money is spent on educating students in low-poverty districts than in high poverty ones.

In this piece, I will tackle how experience in state teacher pension formulae can deepen existing school funding inequities.

Higher teacher turnover rates are not evenly distributed among districts or states. High poverty and rural districts tend to have higher teacher attrition. Indeed, high-poverty districts have been shown to lose teachers at nearly twice the rate as low poverty districts. Practically speaking, this means that less money is spent on both teacher salaries and pensions in low-income communities than in more affluent ones.

Let’s look at how this plays out in West Virginia, a state pension system I’ve written about a lot recently. As shown in the graph below, as a county’s poverty rate increases, so does the average teacher attrition rate. 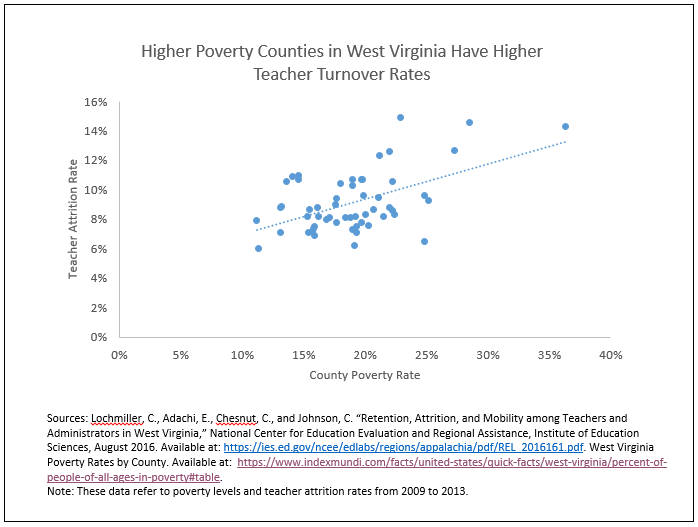 Of course some of that turnover is due to retirement. However, the fact remains: counties with higher attrition rates are likely to have greater concentrations of new, and inexperienced teachers. And importantly, newer teachers have much higher turnover rates than their more tenured colleagues.

Consider the following hypothetical example of three school districts with different turnover rates based on West Virginia’s average attrition rate described above. I set the yearly low-and high-turnover rates at a third above or below the average rate of 9 percent. While teacher turnover tends not to be this linear – with very high attrition in the first year – the idea is to show how different turnover rates, and thus levels of experience in a district, affect school finance. The table below shows my results. After five years, the low-turnover district will have lost about 30 percent of its new teachers, compared to the high-turnover distirct, which will have lost 57 percent of its teachers. In a state like West Virginia with a five-year vesting period, low-turnover districts could easily have about twice as many teachers qualify for a pension than in high-turnover districts.

High turnover districts in West Virginia, and indeed across the country, disproportionately serve low-income students and communities. Those vacancies are often filled with new teachers who themselves are more likely leave the profession after only a few years. As a result, high poverty districts have a disproportionate share of newer teachers who earn lower salaries and less valuable pensions. Ultimately, due to variable retention rates, less money is spent to educate students in high poverty districts than in more affluent ones.

Teacher pensions are calculated based on two key factors: years of service and salary. The longer a teacher stays in a classroom the greater her pension wealth will be. This is because salaries and experience interact: teachers with more experience typically earn higher salaries.

The problem is likely worse than a first glance suggests. This is because many teachers in high-turnover districts will leave the profession before qualifying for pension benefits at all, not to mention serving long enough to reach the valuable back-end benefits. This adds to the problem of high-turnover, and often low-income districts spending less money on total teacher compensation and thereby less on educating their students. Often the largest source of teacher turnover in low-income districts is from teacher "movers," who go on to teach in a different district. Although these teachers keep their state pension benefits, they add churn to the districts they leave, which can negatively affect students.

There is no easy solution to this problem. Teachers leave the classroom for any number of reasons. However, state policy makers should understand the ways their policies interact and look for ways to minimize both the impact that can have on teachers’ ability to save for retirement, and funding disparities between high-and low-poverty schools.