Teacher pensions exacerbate differences in teacher salaries across districts. As we’ve written previously, this has significant consequences for school finance equity. The inequity in per pupil funding between high-and low-poverty districts is even worse when pension spending is factored in. We’ve also found that pensions can deepen gender-based pay gaps in education.

In each case, the problem begins with salary disparities. Since pension plans multiply salaries as a part of their formulas, any inequities in salary will be magnified by the pension plan. In this piece we will explore how differences in districts’ salary schedules – particularly between those serving high-and low-concentrations of students living in poverty – are compounded and grow through the pension system.

Salary differences, however, are not the only way that state pension funds exacerbate inequities. In a forthcoming piece we will examine how differences in district-level retention rates also can impact school funding equity.

More affluent school districts can afford to pay their teachers higher salaries. Often, districts serving a more affluent community offer higher starting salaries than other nearby districts, which can be an effective recruitment tool. The differences don’t stop there. Throughout a teacher’s career, these districts have the ability to offer more generous raises and set salary schedules with greater maximum salaries, potentially increasing retention. In short, the teacher pay disparity between districts often can increase throughout a teacher’s career.

A new data tool from EdSource helps to illustrate the problem by exploring school- level teachers’ salaries across six counties in the San Francisco Bay Area (Alameda, Contra Costa, Marin, San Francisco, San Mateo, and Santa Clara counties). For each district, the tool maps teachers’ lowest starting salary, their expected salary at 10 years of experience, and the maximum salary they could earn.

There is significant disparity across districts for starting, middle, and final salaries. Among unified school districts, Martinez has the lowest starting salary of $43,123, compared with $70,595 in Santa Clara. That is a $27,472 salary gap for a first-year teacher. The disparity is far greater among teachers earning the maximum salary. Palo Alto has the highest maximum salary for a unified school district, at $131,343, compared with $80,739 in Emery Unified. That is a salary gap of $50,604.

Consider Oakland and Santa Clara Unified school districts. As shown in the graph below, at the same level of experience, teachers in Santa Clara make considerably more than teachers in Oakland. Indeed, a 10-year veteran in Oakland will earn $6,471 less than a teacher in her first year working in Santa Clara. The maximum salary in Oakland is nearly $23,000 less than a teacher’s salary in her tenth year of service in Santa Clara. Teachers with the same level of experience can earn wildly different salaries depending on where they work. In short, the district a teacher teaches in matters significantly. 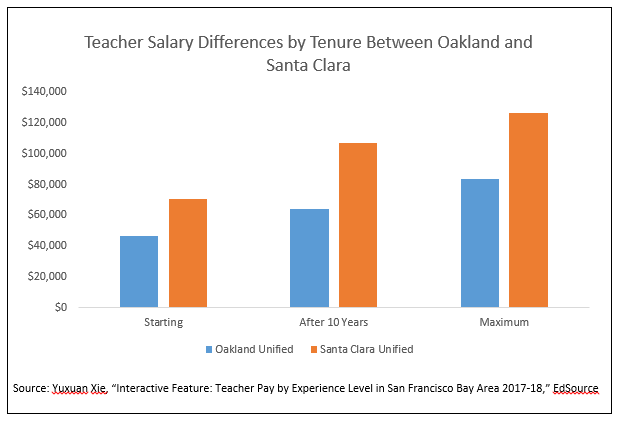 Pensions Increase Inequity Between Teachers in Oakland and Santa Clara

These disparities don’t stop while teachers are working; they continue into retirement due to the differing pensions they earn. Teachers in Santa Clara not only earn more than their colleagues in Oakland while they work, they also can expect much higher pension payments for the rest of their lives once they retire. In fact, the additional pension wealth paid to a teacher in Santa Clara is far greater than the higher contributions they paid to the pension fund due to their higher salaries while working.

If a 10-year veteran teacher in Oakland and Santa Clara both elect to retire, they will earn markedly different pensions. Indeed, the Oakland teacher’s annual pension benefit would only be about 60 percent of the pension provided to the Santa Clara teacher. Put another way, an Oakland teacher who retires after 10 years of service would earn an annual pension that is $8,519 less valuable than a teacher with the same level of experience in Santa Clara. If these two hypothetical teachers draw a pension for 20 years, the teacher from Santa Clara will receive an additional $170,380 over the course of her retirement even though she worked for the same number of years.

The disparity is even greater for those teachers who spend their entire career in the classroom and earn the maximum salary. When a 35-year veteran teacher earning the highest possible salary in the district retires in Oakland, she can expect an annual pension of $58,600. A teacher with the same number of years of experience and also earning the maximum salary in Santa Clara earned an annual pension of $88,500. That’s a yearly pension gap of $29,900 even though the teacher spent the same amount of time in the classroom and earned the highest salary offered by the district. If again these teachers draw a pension for 20 years, the teacher from Santa Clara would receive an additional $598,000 over the course of her retirement.

Spending on retirement, which in California is shared between employees, districts, and the state, is yet another way that more funding is spent on the education of students from more affluent communities than on students from less financially well-off communities.  In Oakland, 74 percent of students are eligible for free-and reduced-priced lunch (FRPL), a common measure of student poverty. In Santa Clara, on the other hand, 43 percent are eligible for FRPL.

Santa Clara has a greater capacity to pay teachers higher salaries, which can help the district recruit and retain effective educators, all while providing those teachers with more valuable retirement benefits which will be subsidized by every other district across the state. Pensions compound existing disparities between high-and low-poverty districts.

Although teacher pension systems are complicated, these examples illustrate how statewide pension plans can magnify school finance inequities. This is largely due to their structure and the fact that affluent districts can raise salaries without being fully responsible for the corresponding increase in retirement costs. Some states address this problem by pushing a greater share of pension costs back onto the districts themselves. While this does more closely align incentives, it nevertheless still puts higher-poverty districts at a disadvantage since they lack the necessary resources to provide higher and more competitive compensation packages to teachers.

While there are no easy solutions to this problem, policymakers should work on improving their pension systems to find ways to ensure that they do not contribute to and exacerbate inequities among districts in the state.