Many of the inequities of the American public education system are well known. Low-income students and students of color disproportionately attend high-poverty and low-quality schools. They are more frequently taught by unqualified, inexperienced, and out-of-field teachers. Their schools are often underfunded, and they frequently have less access to college-preparatory curricula.

An inequity that is often overlooked, however, is that statewide teacher pension plans exacerbate school funding disparities. Our new report, "Illinois' Teacher Pension Plans Deepen School Funding Inequities," looks at the impact of pension spending in Illinois on school finance equity. We found that spending on teacher pensions is yet another way that states invest fewer resources into schools serving the highest concentrations of low-income students and students of color.

Teacher pensions increase funding inequities because they are derived from teacher salaries, which are themselves unevenly distributed across schools. The most experienced teachers, and thus the highest paid, are much more likely to work in low-poverty schools and serve a lower percentage of students of color. Because pension contributions are made as a percentage of salary, teacher pension systems mirror and amplify any inequities in the way teachers are distributed among schools.

To determine the extent to which teacher pensions exacerbate school funding inequities, we analyzed 10 years of Illinois educator data from 2003 to 2012. For those years only, the state of Illinois made available a unique database on every educator in the state, including how long they had served and how much they earned. After pulling the data, we aggregated educator salaries to the school level and calculated the pension contributions using the state’s actual contribution rates. We then paired that data with each school’s student demographics.  This allowed usto track school-level salary and pension spending compared with student poverty rates and student racial demographics.

As shown in the graph below, accounting for pension spending doubles the funding gap between high-and low-poverty schools. 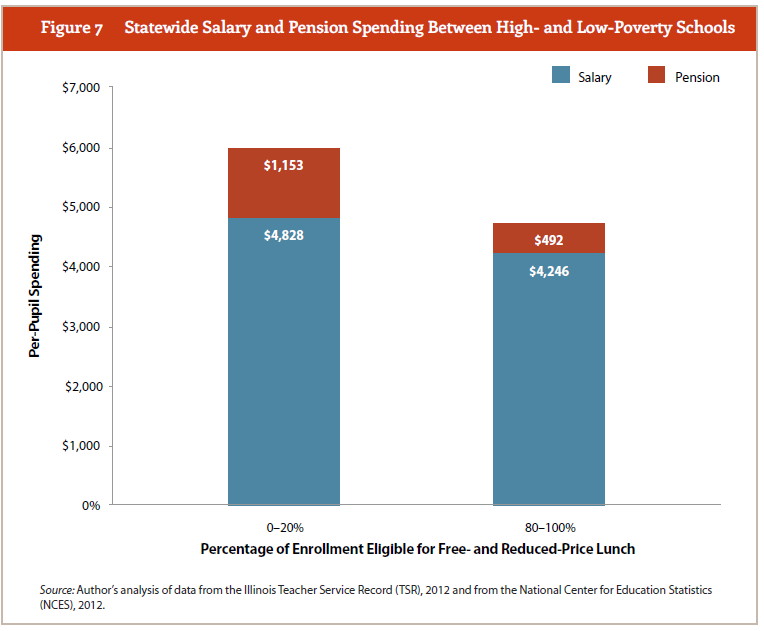 On average the funding gap between high- and low-poverty schools is $582 per pupil. However, once pension spending is layered on top, that disparity grows to over $1,200 per pupil. 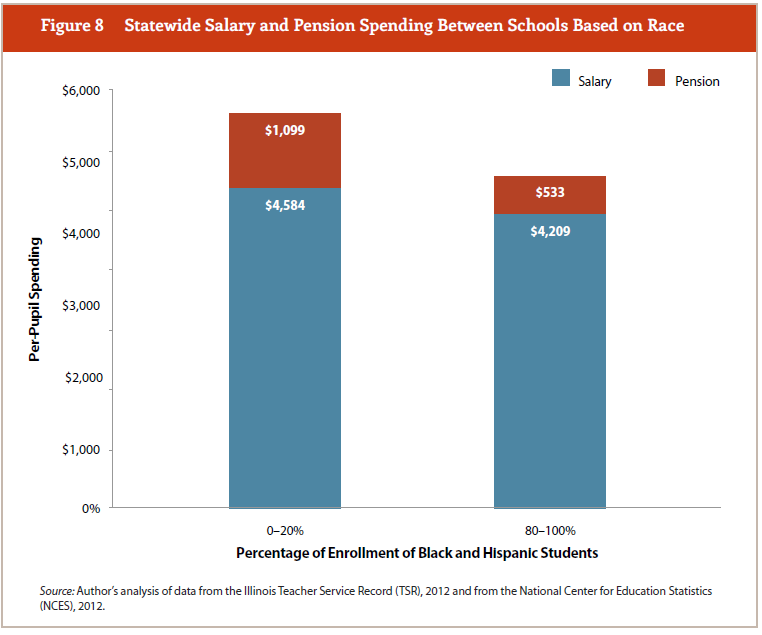 Across the state, the salary-based gap based on student race is $375 per pupil. However, after accounting for pension spending the gap more than doubles to $941 per pupil. Pension spending alone accounts for a difference of $566 per student.

Pension spending in Illinois affects school funding equity so significantly in part due to the fact that there are two pension systems operating in the state: one for Chicago Public Schools (CPS), and another for the remaining districts. Every year in the analysis CPS funded their pension system at a lower rate than the state did for its. And since a majority of the state’s high-poverty schools, and schools serving the highest concentrations of nonwhite students are located in CPS, this compounds the funding inequities. That said, even if all districts were a part of the state pension system, pension spending would still exacerbate inequities due to the underlying disparities in teacher salary distribution.