In an analysis of Illinois teacher pay data, I found that this problem is particularly pronounced in rural and urban school districts. However, the reasons for the pay disparities differ between rural and urban districts. Rural districts have lower average salaries and thus less valuable pensions. Urban districts offer salaries comparable with the suburbs, but have a greater share of educators who do not qualify for benefits in the system, and a greater share of educators with fewer years of experience overall, which also results in lower pension benefits.

The problem is different in Illinois’ urban districts. On average cities pay about the same as suburban districts. That said, their pension spending per pupil is significantly lower than suburban districts. This is principally due to two things. First, Chicago operates its own pension fund, which is in an even worse financial situation than the state pension fund. In the final year of this analysis, the Chicago Teacher Pension Fund contributed only 6.24 percent of salary to the fund compared with 24.06 percent across the rest of the state. The experience of Chicago teachers greatly contributed to the lower pension spending. The good news is that this problem is somewhat ameliorated by a recent law requiring the state to contribute more to help cover Chicago’s teacher pension costs.

The second reason is urban districts employ a higher concentration of younger teachers. Indeed, 5 percent more teachers in suburban districts reach the 5 years of service required to vest into the system and quality for a pension. And for those educators hired after 2011, the vesting period is 10 years. Even fewer teachers will reach that mark. As shown in the graph below, urban districts have a higher concentration of inexperienced teachers. Indeed, suburban districts employ a greater share of mid-career and long-term educators. Since pension spending is determined by formula and is based on salary and years of experience, a disparity in either variable will produce a disparity in pensions. 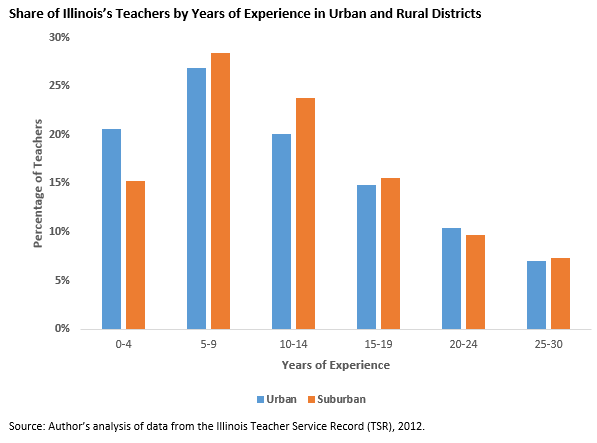 The structure of state teacher retirement systems produces the unintended consequence of exacerbating existing inequities between school districts. And while teacher pension spending is a particular kind of school spending, it nevertheless is yet another disadvantage facing districts that already have fewer resources.

It is understandable that districts with a greater capacity to offer higher salaries will do so. It would help close funding inequities if states provided greater financial support to high-poverty districts. Yet, unless that results in salary equity, the pension system will contribute to spending disparities. There are no easy solutions to this problem, but states should look for ways to provide teacher retirement benefits that avoid compounding existing inequities.