The Good, The Bad, and The Not-So-Terrible: What's Happening to Kentucky Teacher Pensions

This week, thousands of Kentucky teachers marched in the state capitol in response to a prospective change in retirement benefits and general concern with the state budget. While their budget and salary concerns are real, the retirement plan reform is necessary, and will in the long run be good for Kentucky and the state’s next generation of teachers, while still keeping promises to the current workforce.

Why Reform Is Needed

Kentucky's teacher pension plan is one of the worst-funded plans in the country. It has only about half the money it needs to pay for the benefits promised to current teachers and retirees. The state and its districts have more than doubled their contributions into the plan over the last ten years, and Kentucky employers are now contributing almost 30 percent of each teacher's salary into the plan. Most of that is going toward debt, not actual benefits for teachers, but even those increased contributions have not been enough to reduce liabilities or improve the plan's funding ratio.

Like a lot of other states, Kentucky's teacher pension plan is also back-loaded. For a new, 25-year-old teacher just starting out in Kentucky, she must commit to 26 or 27 years of continuous service before her pension benefit will be worth more than her own contributions.

Republican Governor Matt Bevin has been working for months to fix these problems, but he's made a lot of missteps along the way. He shut out teachers from the process, failed to be fully transparent in his plans, and has publicly chastised teachers and their union leaders. Moreover, earlier proposals would have altered the benefit promises made to existing retirees and current teachers. Those proposals, and communications messaging that sounded like attacks, have contributed to the current rancor in Kentucky.

But set aside the process for how we got here for the moment, and consider what's in the actual bill that passed the legislature last week. It makes no changes to current retiree benefits, and it includes only minor changes for current teachers, mainly around how sick leave is calculated in benefit formulas. The most significant change is it would place new teachers hired after January 1, 2019 into a different retirement plan called a cash balance plan.

What the New Plan Would Mean for Future Workers

Under the new plan, each teacher hired after 2019 will be required to contribute 9 percent of his or her salary, and employers will chip in another 8 percent. Kentucky teachers do not get Social Security, so these relatively high contribution rates are especially important.

The new cash balance plan is technically a defined benefit plan, but rather than defining the amount teachers receive through a back-loaded formula, each teacher will receive a guaranteed return on his or her contributions. In Kentucky, the state will credit each teacher with 85 percent of the plan's 10-year rolling average return. If the plan hits its investment return assumptions, that will translate into a return of 6.375 percent. In reality, it could go lower than that if the market returns are lower, but the 10-year rolling average should protect against any short-term fluctuations. Moreover, the state guarantees that no teacher will ever lose money, even if the markets tank and the actual returns are less than 0.

The new plan does not get rid of the existing unfunded liability, but the cash balance plan would ensure the state did not accrue any additional unfunded liabilities that would eat further into discretionary education budgets. The bill also includes other funding provisions to put the state's finances on a more responsible path going forward.

I created the graphic below to show how individual workers would accrue retirement assets under each plan. For comparison’s sake, I assumed the teacher was a female who begins her career at age 25 (see my full assumptions at the end of the post). Due to the five-year vesting requirement under both plans, benefits look nearly identical for the first four years, but the cash balance plan starts looking better once the teacher vests and qualifies for the employer contributions. At year 10, the cash balance plan account would be worth about $84,000, compared to just $32,000 under the old defined benefit pension plan.

Because the defined benefit plan bases its formula on final average salaries that are frozen in time, it delivers benefits in a more back-loaded fashion. For long-term veterans, the current plan would have been better. For a teacher who stays for more than 21 years of service, she would have earned more in the way of retirement wealth through the old plan. The figures are likely to look similar, albeit with shorter cross-over points, for educators who begin their service in Kentucky at later ages. 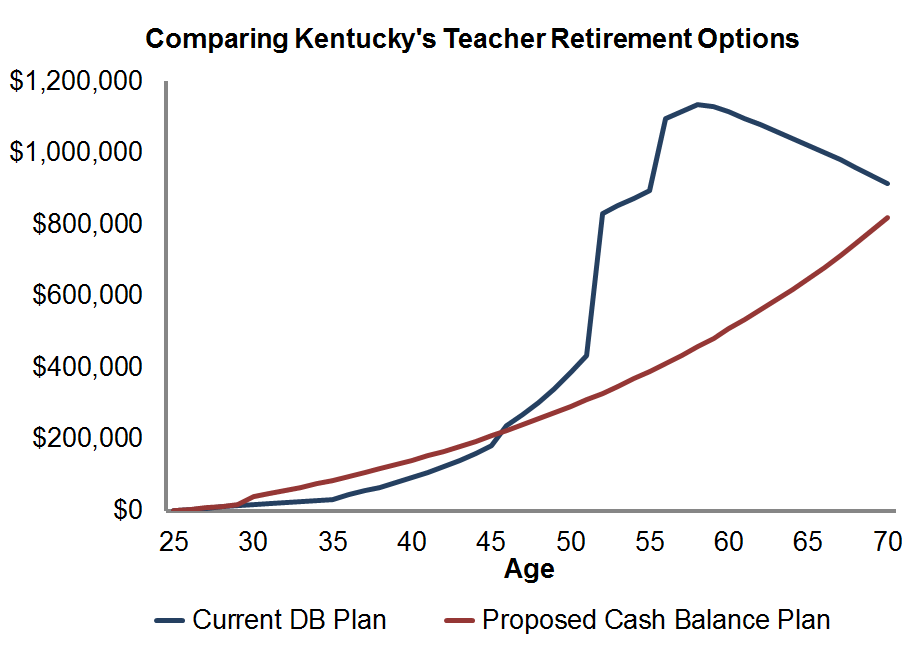 Still, the cash balance plan is at least competitive with the defined benefit model for large groups of Kentucky teachers. Although the graph pictured here doesn’t do it justice, the state's actuarial assumptions on turnover rates suggest that less than half of new teachers will reach 21 years of service.

The new cash balance plan will do a better job of providing all future Kentucky teachers workers with secure, portable retirement regardless of how long they stay, which is especially important given that Kentucky does not offer Social Security. The state has to balance the goal of providing a basic floor of benefits for all workers versus sufficient back-end benefits for full-career workers, and the cash balance plan does a better job balancing those priorities.