Based on data from the California Teachers Association, it looks as though Oakland’s teachers may have a case. OUSD offers a lower beginning salary compared with other districts in California, as well as lower salaries on average and at retirement. As such, the Oakland Education Association (OEA) is demanding as 12 percent raise over three years. These numbers are double the union’s ask in LAUSD earlier this  year, but mirror the demand in Denver.

Whether the raise is warranted or not, it will be difficult for OUSD to afford it given that it faces a more than $20 million budget shortfall. Due to their budget constraints, the district has offered only a 5 percent salary increase.

While Oakland has seen increases in per pupil expenditures over the past three years (see slide 20), increases in benefit spending far outpace the growth in overall K-12 spending or teachers’ base salaries. To demonstrate this, I created the graph below using data from the U.S. Census Bureau. From 2001 to 2016, Oakland increased its current per pupil spending by 39 percent and salaries and wages by only 19 percent. The district’s benefit spending, however, skyrocketed by 127 percent. In other words, Oakland’s spending on employee benefits increased nearly 7 times faster than its spending on salaries and wages. 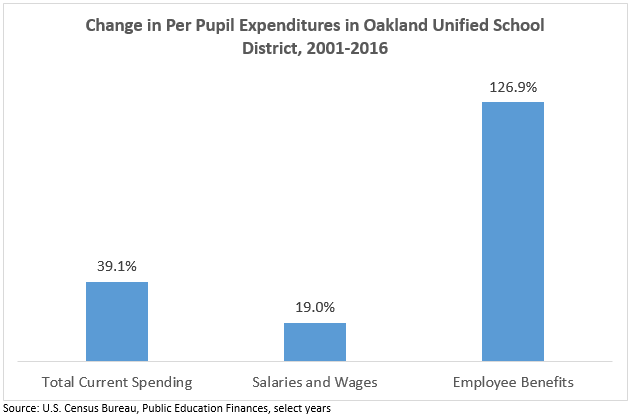 Due to the state’s more than $107 billion unfunded liability, the California pension system has undertaken serious contribution hikes that affect teachers, but really squeeze district budgets. As my colleague Kirsten Schmitz demonstrated, by 2021, nearly 40 percent of teacher salaries will go to benefits and the brunt of the burden will be borne by districts. Districts will pay 19.1 percent of teacher salaries to benefits, an increase of more than 130 percent since 2014.  And to make matters worse, the majority of these new funds are earmarked to pay down debt rather than funding actual benefits. Indeed, most incoming California’s teachers will never even see a pension benefit and instead are simply subsidizing retirees and a relatively small number of long-term teachers.

Oakland’s teachers are understandably concerned about their base pay. And while it likely won’t garner the same attention as the salary fight, they should also be worried about rising benefit costs and the impact it has on Oakland’s education budget.