Back in 2014, we wrote about California Governor Jerry Brown’s plan to increase teacher, district and state contributions to the state teacher pension fund. The California State Teachers Retirement System (CalSTRS) was facing a staggering $74 billion unfunded liability, accrued over years of over-promises and lower-than-expected returns. At the time, we commended Governor Brown for taking preemptive measures to pay down those debts.

As the plan ramps up, it’s beginning to take a toll on district budgets, and it’s worth revisiting what was in that plan. Under Gov. Brown’s proposal, teacher, district, and the state pension contributions will ramp up such that, by 2021, 38 percent of each teacher’s salary will be going directly into the pension system. Districts will bear the brunt of this burden. Their costs will jump from paying 8.25 percent of each teacher’s salary in 2014 up to 19.1 percent in 2021. 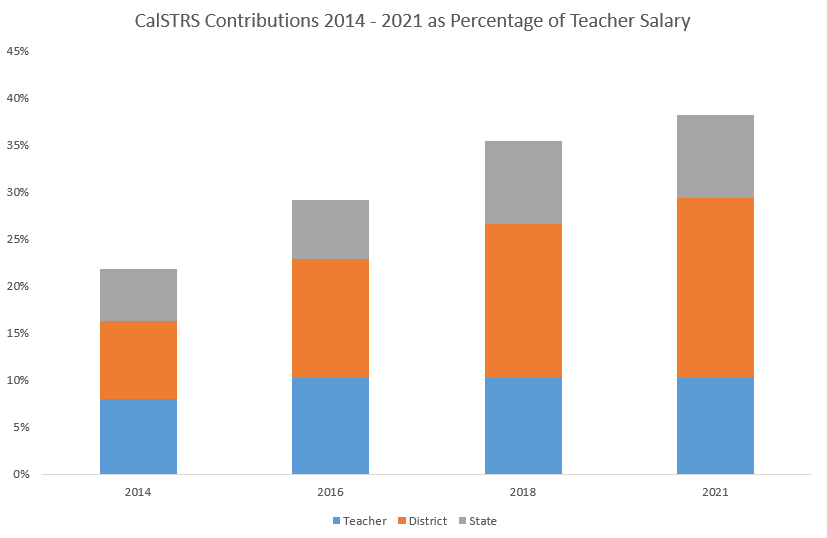 The effects of Gov. Brown’s plan are starting to be felt in districts across the state. Earlier this month, San Diego Unified School District announced major, pension-induced budget cuts.  Voice of San Diego showed the district had paid $75.7 million toward CalSTRS contributions in 2014. This year, with the contribution percentage jumping to 12.58%, the cost is nearly $124 million, and SDUSD is feeling the squeeze. They’re not alone. As districts take on the majority of the contribution increases, money that could otherwise go toward raising teacher salaries, combating teacher shortages, hiring classroom aides, or expanding pre-k will instead go to paying down the state’s pension debt. Over time, districts may get less money from the state as well, as the state’s share of the contributions also ramps up.

At the same time, teachers may feel frustrated. They may not know that district contributions are going up; after all, those contributions don’t show up on their paystubs, even if they are real costs born by their employer. Yet, teachers’ own contributions went up as well, and those are already showing up as lower take-home pay.

Perhaps worst of all, most of the new money is going to pay down pension debts, not to fund actual teacher retirement benefits. Most California teachers will never see a benefit from their pension system and are simply subsidizing past debts and the retirements of very long-term veterans.

Existing legislation ensures these district contributions will continue to rise through at least 2021. This is better than ignoring the mounting debt, but it will dramatically hinder school in their ability to serve teachers and kids. Instead, California teachers may want a refund.