Colorado Teachers Deserve A Say Over Their Retirement

Colorado is on the verge of cutting teacher retirement benefits. We’re nine years into one of the largest stock market booms in history, and yet Colorado’s teacher pension plan faces a massive, and unmoving, unfunded liability.

The plan itself is asking for a cut in benefits for new workers, and earlier this month the state legislature announced its proposal. There are really three main questions: How much will benefits be cut for new workers? How much will costs rise and who will pay them? And should teachers be given a choice over their retirement plan, like other state workers in Colorado?

The debate over the first two questions are yet to play out in the legislature, but everyone is in agreement that something must be done.

There’s less agreement on the third question, but after analyzing the plans, it’s clear that not only should Colorado teachers be given an option to join the PERA –DC plan already offered to state employees, but that plan should be the default for all new teachers.

We know defaults matter tremendously. In the private sector, auto-enrollment in 401k plans, with the option to opt out, has significantly increased plan participation rates. Whether that’s due to trust in the default or simple inertia, workers will often go with the option that’s suggested for them. As a result, the default model should be the one that best serves the interests of the most workers.

The PERA-DC plan is a good alternative, and it’s not the typical 401k-style plan from the private sector. Employees contribute 8 percent of their salary, and employers chip in another 10 percent. It’s run by the state, which ensures members have good investment options with low fees.

While those contribution rates may seem high, they’re necessary because Colorado public-sector employees aren’t enrolled in Social Security. Without the basic floor of benefits that Social Security provides and that most Americans depend on, it’s even more important for the state to ensure its retirement plans give all workers a path to a secure retirement.

Even the current defined benefit plan isn’t meeting that goal. Due to steep teacher turnover rates and a back-loaded benefit structure, about 85 percent of Colorado teachers leave their service without adequate retirement savings.

The proposed cuts would make the situation worse. The new defined benefit plan would be more back-loaded and leave more teachers exposed to inadequate retirement savings. The graph below shows what this would look like for a new, 25-year-old teacher. Even if the individual teacher was a slightly worse investor than the defined benefit plan, the defined contribution plan would deliver better benefits for the teacher’s first 34 years of employment. That is, she’d have to stay for 35 years before the value of her pension would finally surpass what she could have saved in the defined contribution plan. 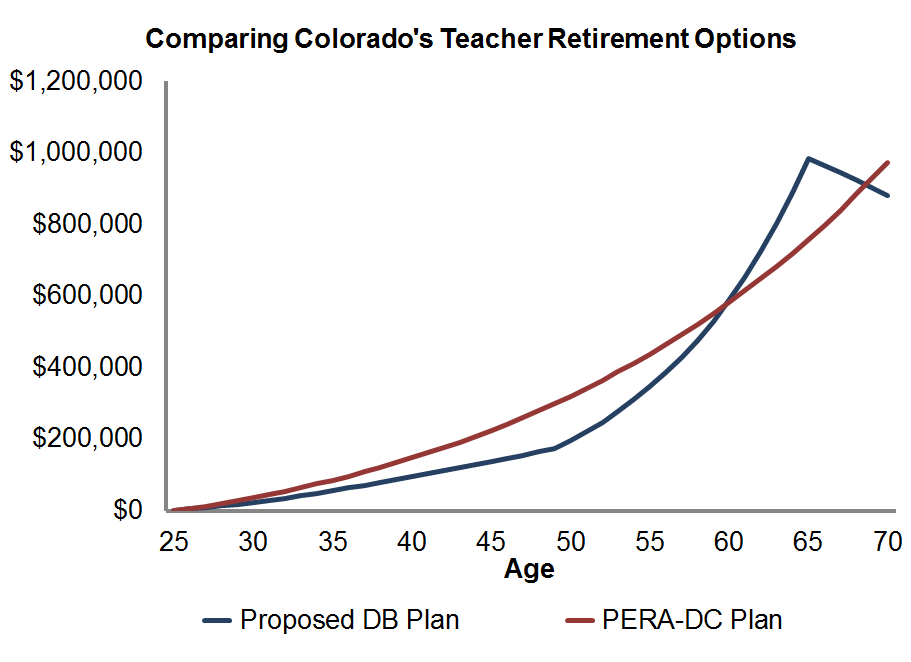 To be clear, my argument is premised on what’s good for teachers, but there would be other benefits as well. Crazy as this might sound, the PERA-DC plan is also cheaper, and it would halt the rising burden of unfunded liabilities. (Wisely, the proposed legislation also includes stabilization payments to the defined benefit plan to ensure that existing teachers and retirees are not harmed by the transition to a new plan.) If that sounds too good to be true, it all traces back to why Colorado is in this situation in the first place—its pension plan is so under-funded that it needs to keep cutting benefits for new workers. Under the status quo, costs keep rising, while benefits keep falling. Shifting new workers into a new plan would allow existing workers to keep their current benefits, while allowing new workers to opt into a better plan. That would be good for Colorado, and good for Colorado teachers.