As I wrote about previously, Arizona’s teacher pension system is complex, expensive, and fails to produce an adequate retirement benefit for the majority of its teacher members.

Over the past decade, the problem has been getting worse. The Arizona State Retirement System (ASRS) has simultaneously cut benefits and raised costs for teachers.

An important way to look at the impact of these changes on teacher retirement benefits is to analyze teachers’ retirement benefits net of their own contributions. As we’ve written about extensively, pension systems are back-loaded, which means that for years, often decades, teachers can actually have a net negative retirement benefit (that is, the pension they would qualify for is worth less than what they themselves contributed).

To show how the various changes to the ASRS system affect retirement wealth for Arizona teachers, I modeled how the benefit structure has changed over the past decade. Each curve in the graph below illustrates how benefits would accumulate for a new teacher hired in that year.

As shown in the graph, Arizona teachers’ net retirement benefits have decreased with each change to Arizona’s system. Part of this is due to rising teacher contribution rates, which will go from 9.45 percent in 2010 to 12.51 percent in 2020, according to the state’s projections. Teachers may feel that as a decrease in their take-home pay, but it also means a cut in their net retirement benefits. All told, a new hire in 2020 will have a much less valuable retirement plan than a teacher who was hired in 2010. 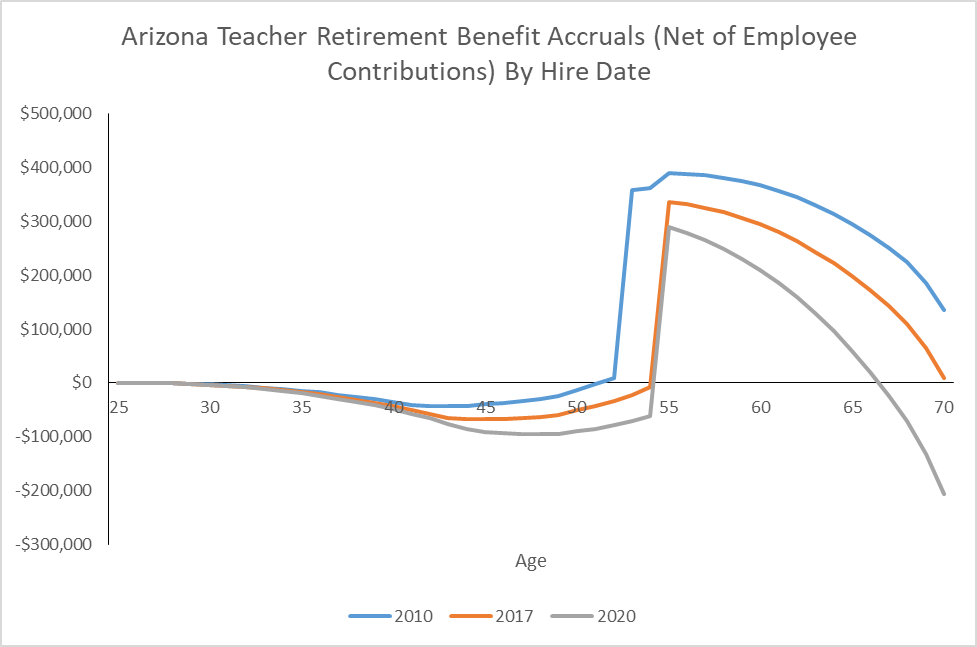 Each line represents a new entrant in a given year. The blue line shows a teacher’s net benefits in 2010. In a set of reforms enacted in 2011, ASRS raised teacher retirement ages and despite a 50-50 split of the total benefit cost, teachers assumed a greater share of the normal cost of benefitis since the employer contribution is mostly going to pay unfunded liabilities. The orange line shows the result of those reforms. The reduction in benefits shifted the curve to the right, while subsequent increases to teacher contribution rates have continued to depress the curve, producing lower net benefits.

Altogether, pension design issues affect how much teachers get out of the plans. Due to benefit cuts and cost increases, teachers are getting less bang for their buck as their net retirement benefit continue to fall.

This problem is not unique to Arizona. States across the country are asking teachers to pay more for lower benefits. But just as teachers in Arizona earned a much-deserved raise last year, they also deserve higher-quality retirement benefits.