According to a study released last week from the Urban Institute, nearly 80 percent of Rhode Island teachers will be better off under a new retirement plan adopted in 2011. Rhode Island legislators reformed the state retirement system with the adoption of the Rhode Island Retirement Security Act (RIRSA), which restructured the previous defined benefit plan into a hybrid plan comprised of both a defined benefit and defined contribution components. The law went into effect on July 1, 2012, and practically all working teachers were enrolled into the plan. State worker unions have since filed lawsuits against the legislation, and pending mediation for a settlement proposal could alter certain provisions in the plan.

Before 2011, teachers participated in a traditional defined benefit pension plan. The old plan calculated pension benefits by multiplying final average salary by total number of service years and a multiplier determined by the number of service years. Teachers who worked for a minimum of 10 years could participate in the system and receive full-retirement benefits at age 65 (or after 29 years of service at age 62). Teachers who met retirement service requirements before July 1, 2005 were vested in “Schedule A”; teachers meeting service requirements after July 1, 2005 were vested in “Schedule B.”

The following chart from the report compares annual pension benefits from the old Schedule B plan and new plans. 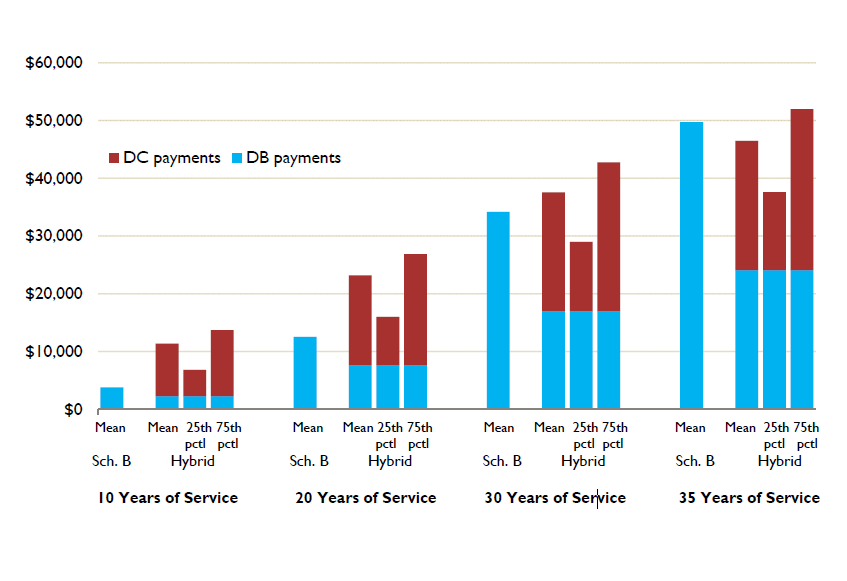 The next set of red-blue bars shows the mean or average yearly benefits in the new system. While the hybrid plan’s defined benefit is smaller than the old plan, in combination with the defined contribution plan, total hybrid benefits exceed the old plan for potentially all groups of teachers. Teachers in the earlier years receive substantively more in benefit payments, particularly for teachers who teach between 10 to 20 years of service.

In the old system, only 15 percent of teachers stayed in the classroom long enough to garner a high pension while the majority of teachers received minimal or no retirement benefits. Unlike the old plan, the hybrid plan provides greater retirement security for teachers who teach for twenty years or less, while still providing comfortable retirements for teachers with more service time. In other words, the researchers found that more teachers would likely benefit from the new system.

Rhode Island has been in the midst of a settlement agreement over RIRSA. The settlement agreement, if passed, would keep the same hybrid plan but increase the employer contribution in the defined contribution portion for teachers who reach 10 to 20 years of service. The Rhode Island Superior Court recently ordered the state and plaintiffs to return back to mediation, where the future of the plan will yet to be determined. The Urban Institute report suggests most teachers would be better off if they preserved the fundamental elements of the new plan.

*From Urban Institute authors’ calculations from plan documents and actuarial reports. Estimates are for teachers hired in 2014 at age 25 who earn the average salary among plan participants for their age and years of service. The analysis assumes that hybrid plan participants annuitize the balances from the DC.