Two Graphs on Urban Teachers and Their (Lack of) Pensions

Two of their graphs, reproduced below, compare teacher retention rates (the dotted lines) in traditional and public charter schools with pension wealth accrual (the solid blue line). Here's what the situation looks like in Kansas City: 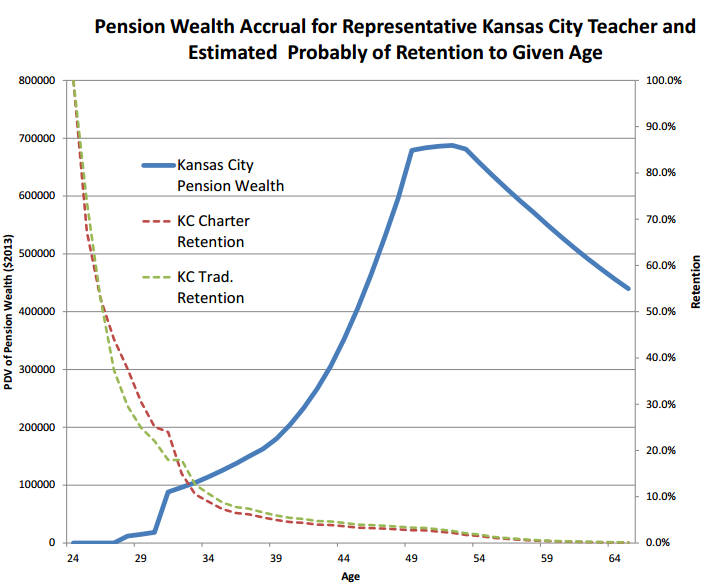 And here's the same graph for St. Louis teachers: 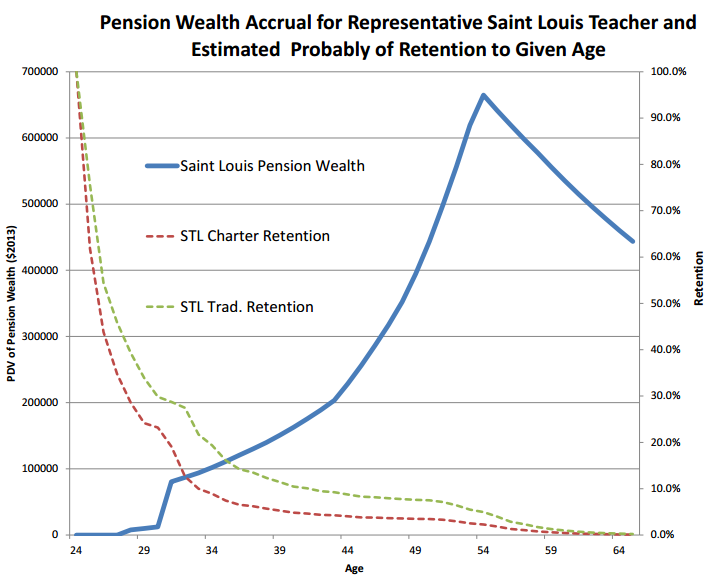 As you can see, both cities have high teacher turnover rates in both of their traditional and public charter schools. In both cities and sectors, more than half of all new teachers are gone within five years. Only about 10 percent of teachers make it to ten years.

Those are very high turnover rates, which is obviously a problem for the cities, their schools, and the students. But the teachers themselves are losing out as well. Kansas City and St. Louis may be extreme examples, but the situation is similar in cities and states all across the country. Defined benefit plans offer very little to early-career workers, jump in value a bit when employees "vest" into the system and qualify for a minimum pension, and then increase steeply as employees near retirement. (Pension wealth actually declines if employees choose to continue working after becoming eligible for retirement, because every year they keep working is a year they could instead be receiving retirement benefits.)

But what these graphs illustrate is just how few teachers are actually benefitting from the current pension system. The majority of teachers do not remain long enough to qualify for even a minimal pension, and only a very tiny fraction of teachers stay long enough to receive a pension that would be sufficient for a stable retirement. The Kansas City and St. Louis teacher pension plans are set up for a workforce that doesn't exist.