Defined benefit pension plans include two key points in time for all members. First, there's a "vesting" requirement, the period of time the employee must work before they qualify for even a minimal pension benefit. Most state pension plans for teachers have either a 5- or 10-year vesting requirement. The second key point in time is when teachers are first eligible to retire and start collecting benefits. If pensions are a tool to boost teacher retention, we should see teachers change their behavior around these two key points in time.

There is ample research showing teachers do know and respond to the financial incentives tied up in their retirement age. Research from Missouri and California has shown that teachers nearing retirement age do time their retirement for when they hit their peak retirement compensation. This acts as a retention incentive for teachers nearing their full retirement age, but it also pushes out some veteran teachers who would have otherwise kept working. This makes sense, because, at that point, every year they keep working is a year they could be retired with nearly the same income. They could work another year for 100 percent of their salary, or they could retire from working, do something else, and still receive a large portion of their salary in the form of a pension.

The full retirement age varies across the states, but it typically falls somewhere between ages 50 and 60 for teachers who have been working 20 or 25 years. Unfortunately, not that many teachers remain in the profession that long. In fact, one recent report found that teachers in 9 of the 10 of the largest school districts had less than a 10 percent chance of remaining employed long enough to receive the maximum pension payout.

What about the majority of teachers that won’t reach these career milestones? Do pensions affect their retention decisions?

Conceptually, a teacher facing a 10-year vesting requirement likely does not say to herself, in her 3rd year of teaching, “well, I don’t like teaching here very much, but if I just stick this out for seven more years, at least I’ll qualify for a minimal pension!” The pension-as-retention-incentive argument looks even stranger when you consider it from the employer’s perspective. States and districts have been lengthening their vesting requirements in the last few years because it saves them money. It takes a giant rhetorical leap to argue that offering cheaper, worse benefits to teachers through longer vesting requirements is an incentive for them to stay in the profession longer. (This same logic applies to those who argue that pensions are a recruitment incentive.) 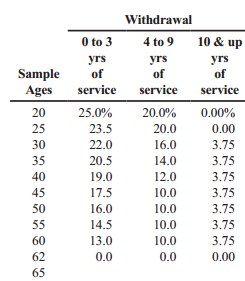 These teachers were eligible to vest into their pension plan after five years, but there’s no noticeable change around year five. As in D.C., a lot of New York City teachers leave in their first few years and departures fall gradually from there. (You can see this same data graphically here.) There’s no evidence of teachers knowing about or reacting to the 5-year vesting period. Even when looking at multiple cohorts of entering teachers, there’s no noticeable jump around the 5-year vesting requirement (See Table 3.17 here). As in D.C., the Teachers’ Retirement System of the City of New York does not estimate any change in teacher behavior based on the vesting requirement.

In the next few months, Bellwether will be releasing a paper looking at this sort of data for every state. Having looked at each state’s assumptions for teacher turnover assumptions, I can tell you that the pattern from D.C. and New York repeats itself all over the country. According to their own data, state pension plans are simply not a retention incentive for the vast majority of teachers.