New public sector workers are getting a raw deal. States have responded to their pension funding gaps by cutting retirement benefits for new hires and increasing the amount of time workers need to serve before qualifying for a pension, raising the normal retirement age, and reducing benefit formulas.

A new paper from the Center for State and Local Government Excellence and the National Association of State Retirement Administrators estimates the size of these penalties. The authors estimate that states trimmed pension benefits by an average of 7.5 percent for workers planning to stay for a full 30-year career. (The differences are likely even larger for the vast majority of workers who will never reach 30 years, but the study doesn’t mention this group.)

The chart below shows the extent of the cuts for full-career workers. The blue bars represent the difference in annual retirement benefits for equivalent workers with 30 years of experience hired pre- and post-recession. In states like Pennsylvania, Alabama, Maryland, and New Mexico, legislators cut benefits for new workers by 19 or 20 percent. New employees will have to work years longer in order to qualify for equivalent benefits. 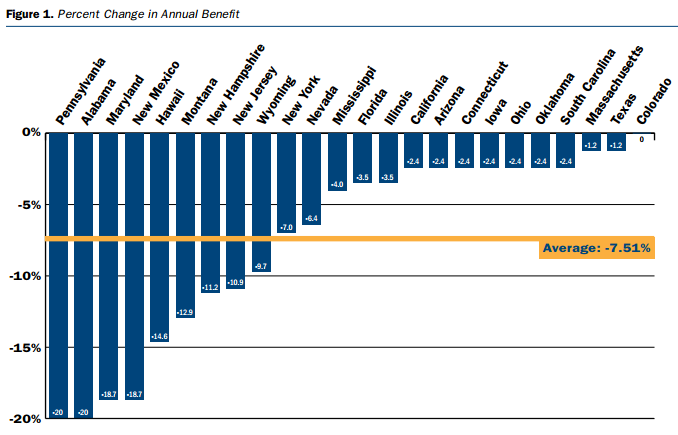 In making these changes, states mostly shielded current employees from any cuts, instead imposing steeper reductions on new employees, the ones who will start government work in the coming years. Nothing is different about these workers except the year they were hired, and usually that’s as arbitrary as a given date. Teachers hired on December 31, 2013 may earn one set of benefits, while those hired one day later, on January 1, 2014 earn much less. They’ll be doing the exact same job and, in most states, they’ll pay the exact same contribution rates.

We shouldn’t have this problem in the first place. Unlike Social Security or other pay-as-you-go plans, state pension plans are intended to be forward-funded so that all future obligations are covered by assets today. But that’s not the way they’re working. In practice, every state is asking its youngest workers to pay for the retirement of the older workers. For example, New York State now has six different pension tiers, and each one is less generous than the one before it.

After documenting the extent of the cuts, the paper then turned toward analyzing five new “hybrid” retirement plans that combine a less-generous defined benefit plan with a defined contribution, 401(k)-style component. The authors found that three out of the five hybrid plans—those offered in Utah, Rhode Island, and Tennessee—would yield a retirement benefit that was greater than the prior defined benefit plan while simultaneously offering employees greater mobility and control. Two states, Georgia and Virginia, had such meager employer and employee contributions in the defined contribution component of the hybrid that employees were likely to be worse off financially.

(These results confirm well-structured hybrid plans can accomplish simultaneous goals of providing workers with secure retirements and more flexible working lives. The authors also interviewed state retirement officials, and interviewees called the new hybrid plans “a net positive for affected employees, especially teachers who may not spend an entire career in the government but will be able to access retirement benefits after a shorter tenure.”)