The benefit structure of pension systems is weird. The benefit an educator gets out of a pension fund is actually not a function of how much they contributed and the state contributed on their behalf. Instead, it is based on a number of factors, including: the age they enter and exit the system, their years of service, and their salary. That’s not how other retirement plans work. A defined contribution plan such as a 401k, produces benefits that are based on employee and employer contributions, plus whatever interest is earned on those contributions. Money out is a product of money in.

As we’ve written on this blog previously, pension benefits are decoupled from contribution rates. As such, they can hide large cross-subsidies that typically transfer retirement wealth to the most veteran educators. In a new study of the Massachusetts Teachers’ Retirement System (MTRS), Robert Costrell and Dillon Fuchsman from the University of Arkansas find that 74 percent of educators are pension “losers.”

In addition to the heavy back-loading of state pension systems, cross-subsidization is a big reason for so many educators earning benefits that are less valuable than their own contributions. What happens is that states’ report a uniform contribution rate, say 15 percent, with 5 percent coming from employees and 10 from employers. But no individual gets that 15 percent. Instead, the money is pooled together and awarded out via formula, and actual distributions can vary widely vary from individual to individual. And that variation tends to follow a few patterns that disadvantage newer entrants into the education profession and which favor long-term veterans.

In fact, a large group of Massachusetts teachers will receive pension benefits worth less than even their own contributions. How long that is the case depends on their age when they entered the profession. As shown in the graph below*, a 25-year-old entrant won’t qualify for benefits worth more than her own contributions unless she stays more than 30 years (the black line in the graph). Older entrants (purple line) become pension winners much more quickly and are more likely to receive retirement subsidies from younger and newer teachers. 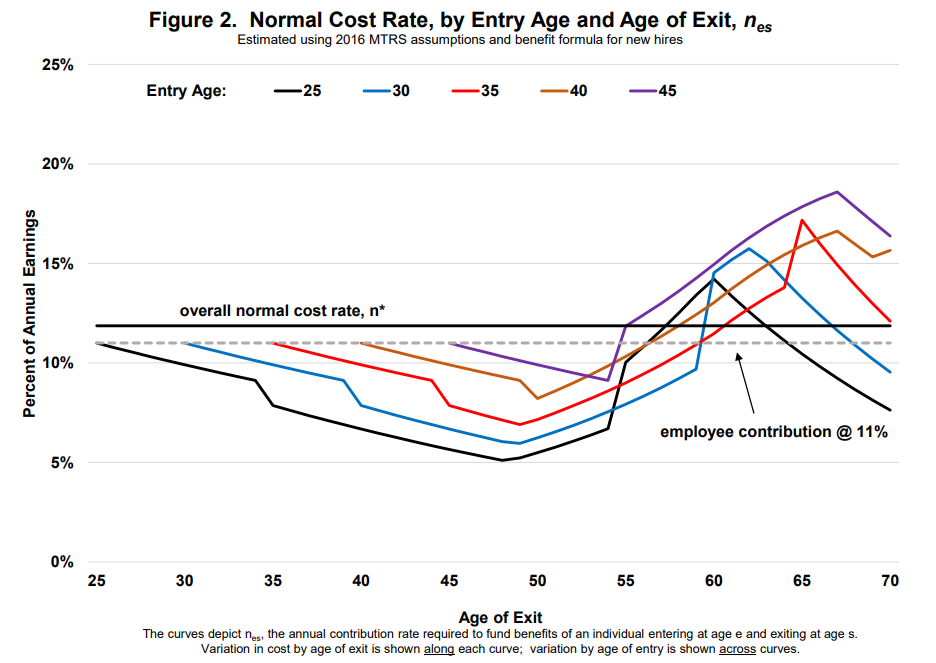 There are a number of reforms – ranging from relatively low-effort to completely reforming their teacher retirement systems – that states should consider. For one, they should increase transparency around contribution rates and the actual cost of benefits for individual educators. It is a problem that some teachers think they’re getting 15 percent of their salary toward retirement when in fact it is closer to 5 percent. But even that change won’t address the problem of massive unfunded liabilities that drive up the cost of pensions for educators and states. To tackle that, states should consider giving new educators the option of a cash-balance plan, or a defined-contribution plan that would, for the majority of new educators, actually provide a more valuable retirement benefit.

*Source on the graph: Robert Costrell and Dillon Fuchsman, “Distribution of Teacher Pension Benefits in Massachusetts: An Idiosyncratic System of Cross-Subsidies,” University of Arkansas, Draft, February 2018, available at: http://www.uaedreform.org/downloads/2018/02/distribution-of-teacher-pension-benefits-in-massachusetts-an-idiosyncratic-system-of-cross-subsidies.pdf.