The conventional wisdom on saving for retirement offers two key principles. First, you should start saving early. And second, the wealth of your savings is directly related to how much you contribute to them. In fact, these two ideas form the basis of a Prudential commercial that frequently runs on TV.

For people in most professions the conventional wisdom more or less applies. But, unfortunately, it doesn’t for public school teachers. That is because nine out of ten teachers are enrolled in defined benefit plans that accrue benefits differently, based on state-determined formulas that multiply a teacher’s final salary by her years of experience.

A recent study from the University of Arkansas found that, in the California State Teachers’ Retirement System (CalSTRS), nearly two-thirds of entrants into the teaching profession are pension losers. That is, the majority of California teachers will either be ineligible for a pension or the pension they do qualify for is not worth as much as the money they themselves contributed to the overall pension fund.

The graph below illustrates the value of a teacher’s benefit (what pension plans refer to as the “normal cost” of benefits) broken down by entry age and longevity. It shows that less experienced teachers provide a considerable subsidy for those teachers who last in the profession longer. This pattern holds regardless of the teacher’s age when she enters the profession, although teachers who begin their careers at later ages earn a positive benefit after fewer years of working. Note that California teachers technically qualify for some pension after only 5 years, but even reaching that milestone does not protect against many more years of teachers cross-subsidizing more experienced veterans. 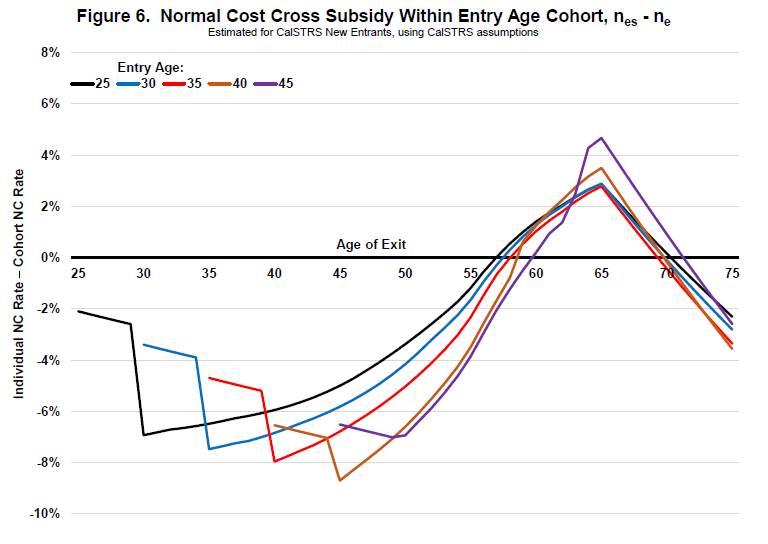 This happens because how much a teacher puts into the pension system does not determine how much she gets out. As a result, teachers do not qualify for much in the way of pension benefits until late in their careers, as they near retirement age. Thus, state pension systems (as illustrated above) are extremely back loaded and shorter-term teachers are subsidizing the retirement of teachers who stay their full careers.

This cross-subsidization presents a number of problems. The system lacks transparency, and teachers may not realize how much is being contributed on their behalf or how the system creates these cross-subsidies. The system overall may look “cheap,” but it might be obscuring the fact that some portion of teachers will receive quite adequate benefits, while most teachers get much less. Also, the problem of cross-subsidies is compounded over time as teachers enter and leave the profession, contributing to cross-generational pension liability problems. And perhaps the biggest problem is that more than half of teachers are “pension losers” whose pensions have been compromised by this back-loaded cross-subsidized system.

Defined contribution plans such as a 401k or 403b account don’t have these problems. Under those types of plane, a worker’s retirement benefit is directly related to how much the employer and employee contribute to it, and how much those contributions grow over time. Those types of plans also avoid the problem of back-loading and therefore employees do not, in effect, have their retirement savings diminished if they leave the profession before reaching retirement age.

The graph below illustrates the value growth of multiple kinds of retirement plans. The data assumes a teacher who entered the workforce when she was 25. It’s clear from this graph that the retirement savings of the majority of teachers today would benefit considerably if their state offered a DC or a cash balance (CB) plan instead of their traditional pension. In fact, the DC plan provides a teacher with greater retirement wealth except for the very few teachers who spend their entire career in the classroom in the same state. 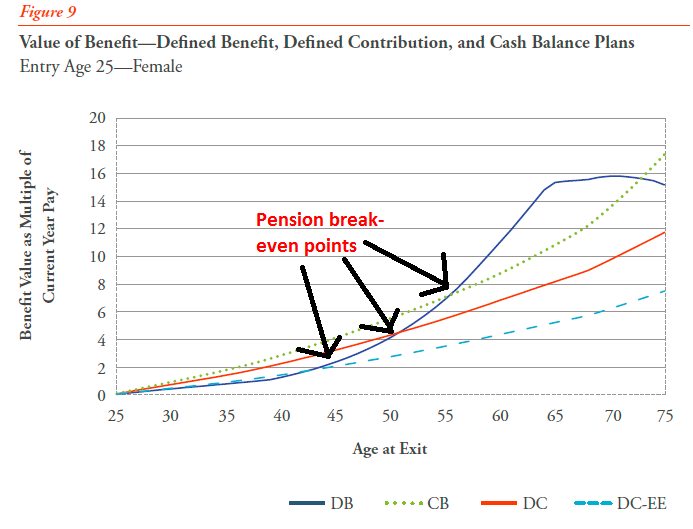 Source: Nari Rhee and William B. Fornia, “Are California Teachers Better off with a Pension or a 401(k)?,” UC Berkeley Center for Labor Research and Education, 2016, available at: http://laborcenter.berkeley.edu/are-california-teachers-better-off-with-a-pension-or-a-401k/.

To better serve teachers’ retirement needs, states should at least provide newly hired teachers with the option to avoid the traditional state pension system, instead choosing a more portable defined contribution plan. This would be better for teachers and help keep states from continuing to add to their burgeoning unfunded pension liabilities.