This piece was coauthored by Chad Aldeman and Max Marchitello

State teacher pension systems are in serious need of reform. Aside from skyrocketing costs that eat up a growing portion of states’ education budgets, teacher pensions simply do not provide the majority of teachers with a valuable retirement benefit. Whether because they don’t meet the vesting requirements, they move states, or only teach for a portion of their career, more than half of teachers either do not earn any pension, and less than one-in-five earn a full pension.

Despite these problems, states are still slow to change. One possible reason for that reticence is a misconception that under-funded plans need an influx of new teachers to help pay down past debts. That is, there’s a belief that closing existing plans would destabilize the system for all current teachers and retirees.

Fortunately, this need not be the case. In fact, switching new teachers to a new type of retirement plan, such as a defined-contribution plan, can be cost neutral.

Consider the following example of a state with a total pension contribution of 20 percent of teachers’ salaries. In this example, teachers contribute 5 percent of their salary and employers contribute 15 percent of each teacher’s salary. Unfortunately, two-thirds of that employer contribution, or 10 percent of each teacher’s salary, has to go toward paying down past debt, and only 5 percent goes toward paying for actual teacher benefits (what actuaries call the “normal cost” of the plan). We chose round numbers here for illustrative purposes, but they are broadly representative of the average teacher pension plan today. 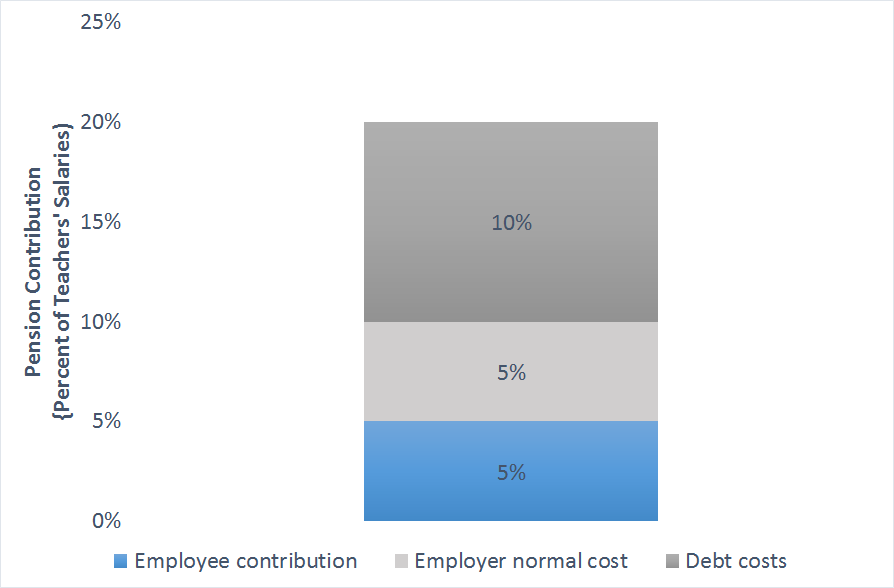 Now let’s look at how a state can close the plan to new employees and still keep paying down its debt. In the example below, all teachers keep making the same 5 percent contribution. The 10 percent of teacher salaries necessary to pay down debts remains constant. However, since new teachers will be enrolled in a defined contribution plan, they will not have a “normal cost,” but instead a direct 5 percent contribution toward their retirement fund. The total costs to the system stay the same, and teachers receive the same value of retirement savings, but new teachers are now enrolled in a new plan with more portable benefits for them and no more debt accruals for the state. 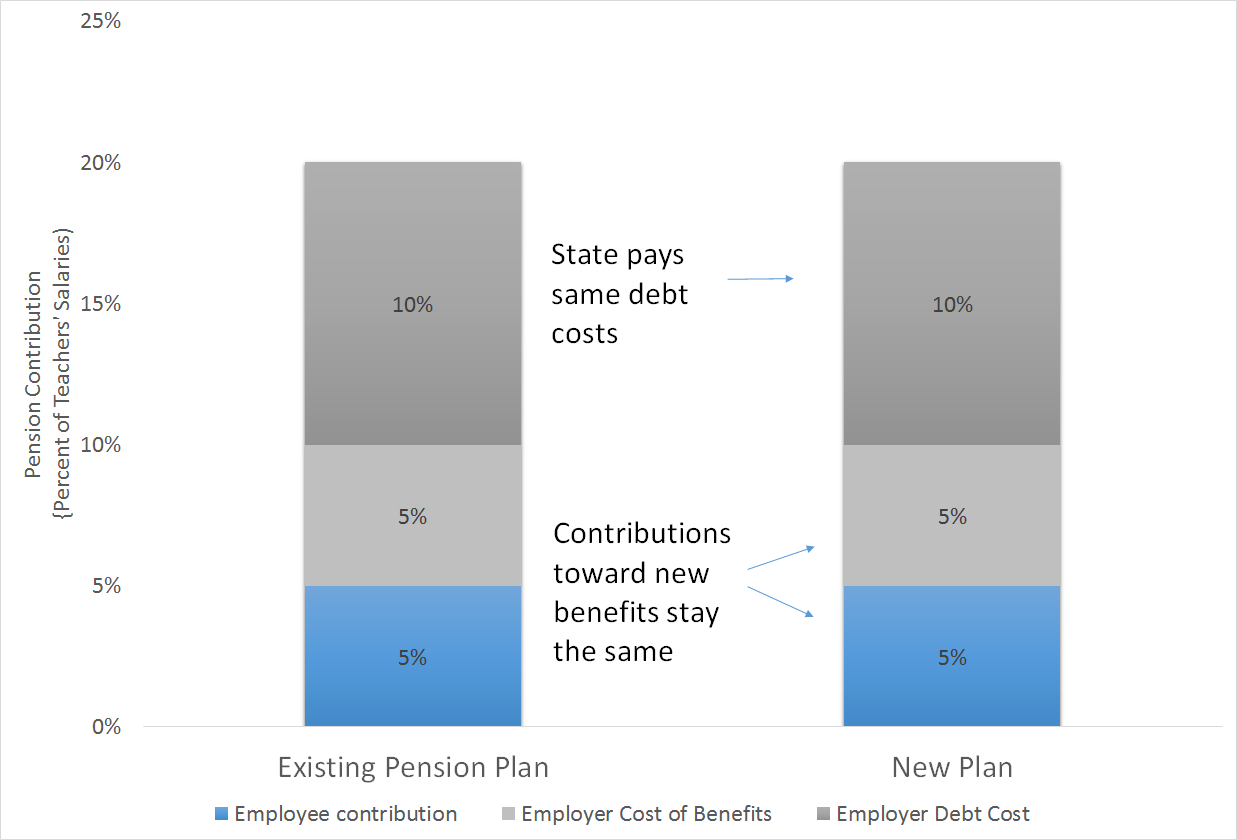 Now, we're simplifying a bit here. Pension plans would have to adjust their investment strategies as more of their membership aged closer to retirement, just as individuals must do with their own investments. Plans with young members can take more risks, because they won't have to pay benefits for many years in the future. Once a state closes a plan, the membership will slowly age over time and plans would need to make more conservative investments. Still, that transition could take place over decades, as current workers gradually age into retirement, and states could instead phase in changes slowly over time. On a cumulative basis played out over decades, the costs of these changes would be relatively small, and meanwhile the state would stop adding to their current debt loads.

To be clear, some recent pension reform proposals have come with high price tags. But those are not because of the change in pension plans. Rather, in the case of recent proposals in Kentucky and Michigan, the increased costs were due to the fact that the states were simultaneously shifting new workers into a new system AND changing the way they paid down existing debts. Sort of like a homeowner switching from a 30- to a 15-year mortgage, those states are attempting to front-load their costs to pay down their debts more responsibly. While this is also a good idea, it's separate from the change in retirement plans.

All of this is to say that states can make the shift to new retirement plans easier than pension advocates claim. They could enroll new teachers in a new retirement system without incurring much in the way of additional costs, stop adding to their already large pension debts, and better serve the majority of teachers.