Teacher pension systems are not structured to effectively serve educators whose spouse is an active duty military service member. And while teaching may be a good career option for military spouses in theory, the way that states have set up their pension plans means these families will face challenges saving for retirement.

For military families, who typically move every 2-3 years, the problem can be boiled down to this: statewide defined benefit (DB) pension funds are designed for educators who spend their entire career teaching in the same state. A key challenge for highly mobile educators like military spouses is that state teacher pension benefits are not portable. Teachers who leave the state, even if they continue teaching elsewhere, cannot take their pensions with them. This is not to say that teachers who have served long enough to qualify for a pension lose those benefits if they move away from the state. Rather, their overall pension wealth ceases to grow once they leave the state. Dividing a career’s worth of pensions across multiple state plans can significantly decrease the total value of their aggregate retirement wealth.

While there are military personnel in every state, the table below lists the ten states with the largest population of active duty military personnel. It also includes six elements of the state’s teacher retirement plan most relevant to military families. This piece will explore how these aspects of teacher pension plans affect military-connected families. How well they are served by these pension funds varies from state-to-state. 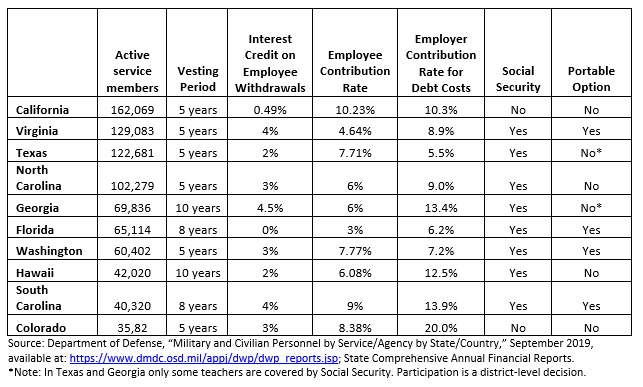 The first thing to notice is that each state has set a vesting period of at least five years. This means that an educator must teach at minimum for five years in the state to be eligible to receive the contributions to the pension fund the state made on her behalf. This presents a challenge to all educators, since in 30 states less than 50 percent of teachers ever vest in the system. This problem is particularly acute for military-connected families who move across state lines before reaching the years of service threshold required to qualify for benefits. In Georgia and Hawaii, teachers must work twice as long to qualify for a pension – far longer than a military family can expect to live in the same state. And given 70 percent of all active duty personnel are employed in these 10 states, it is likely that military families will be stationed in one or more of these states during their career.

For teachers who fail to vest in their state’s pension fund, how much they personally contribute each year is particularly relevant. The employee contribution rate -- the percentage of salary a teacher pays into the pension each year – can act like a forced savings mechanism, requiring teachers to put away some money each year for retirement. With this in mind, military-connected teachers tend to be better served by state plans with higher teacher contribution rates, such as in Colorado and Washington. Florida and Virginia, on the other hand, have relatively low contribution rates, which results in lower retirement savings for educators in those states. Additionally, the majority of states with the most active duty military personnel provide interest credit on a teacher’s own contributions if they leave the fund before vesting. For example, Virginia awards 4 percent interest on teacher contributions to those who exit prior to reaching the 5 year vesting threshold.

State spending on pension debt matters to all teachers. The more a state spends on debt costs – essentially playing catch-up on payments they missed in the past -- the fewer dollars they have available to be spent on benefits or increased teacher salaries. Greater spending on debt costs reduces a teacher’s total compensation, which is harmful generally, but most acutely for those educators who leave the state or the profession before qualifying for a pension.

Despite the challenges military-connected educators face with state pension systems, there is some good news: Six of these states participate in Social Security.  This is critically important for all teachers, but especially those who move frequently from state-to-state since they can count on this monthly supplemental income when they retire. However, teachers who work all of their career in a state without Social Security will not receive those benefits in retirement. For teachers who move a lot, their time in those states will not count as qualified service for Social Security, and can reduce their benefit when they retire.

Another piece of good news is that four of the states with the most actively duty military personnel offer alternative, portable retirement plans. Like a typical 401k retirement plan, these plans can travel with teachers if they leave the state or the profession altogether. This can be a good option for educators who expect to move frequently.

Teacher pensions are designed for educators who spend their entire career in the classroom and in the same state. Simply put, these systems are ill-suited for military-connected families who are at risk of moving around the world. To better serve our service men and women and their families, states should consider providing them the option of enrolling in alternative retirement plans that are as mobile as they need to be.