Over the last 20 years, per-pupil spending has more than doubled. Alarmingly, however, school district spending on employee benefits grew even more quickly. Now, over 22 percent of per pupil spending goes toward benefits payments. In other words, on average 20 cents of every dollar a district spends goes to teacher pensions and other benefit obligations. 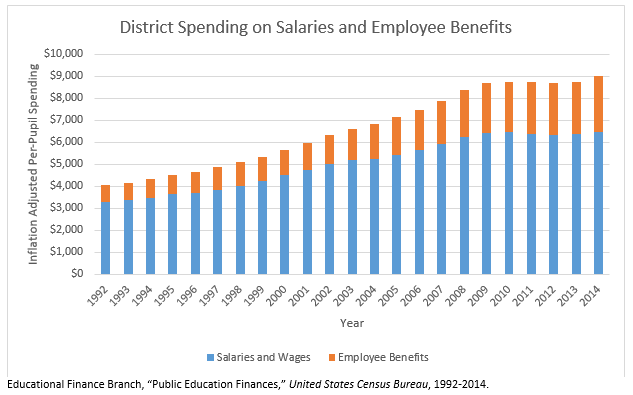 The current structure of teacher pensions are responsible for a lot of the increased spending on employee benefits. In fact, over $1,000 per pupil is spent nationally on teacher pensions. States, and to a lesser extent districts, have spent decades kicking the can on their pension obligations. And as a result many pension funds now carry billions of dollars in unfunded liabilities forcing them to allocate more money to pay off their debts. Without a corresponding increase in the overall education budget this necessarily means that benefits eat away at other education spending.