Let's Not Kid Ourselves. There Were No "Good Ol' Days" of Retirement Saving.

There's a common, widespread belief that the shift from defined benefit pension plans to defined contribution plans in the private sector led to a decline in retirement savings. This is a myth. In fact, there were no "good ol' days" of retirement saving.

The myth starts simply enough. It's certainly true that private companies made a dramatic shift in the 1980's and 90's away from pension plans and toward 401k-style defined contribution plans. It's also true that, historically, pension plans were better investors than individuals (although that edge is diminishing).

It's also temping  to conclude that our awful saving habits must have been caused by something. This is a trap that Dana Goldstein fell into last week. In a column for Vice, she concluded that, "the shift away from pensions has decimated Americans' retirement security." Her evidence for this claim is a link to a Guardian article showing that many people have 401k account balances worth less than $100,000. This is, indeed, not a very good outcome.

But what Goldstein misses (and she's far from alone in making this claim) is a smoking gun of causality. It turns out that we've NEVER been good at saving for retirement, and Ye Olde Private Pension Plans plans weren't that great either. It's easy to forget now, but a rash of high-profile bankruptcies and rampant misconduct in the private sector led to the passage of the Employee Retirement Income Security Act (ERISA) in 1974, a law that mandated protections for workers and created the Pension Benefit Guaranty Corporation (PBGC) to ensure that workers received some retirement income when their former employers went bankrupt. (We still have no equivalent protections in the public sector.) Ironically, ERISA itself is often blamed for the shift away from pension plans, even though it was seeking to clean up some of the worst offenses.

But even beyond high-profile failures, private-sector pensions were not providing retirement security to the masses. Like public-sector plans today but to an even greater extent, they were back-loaded and required workers to stay for very long periods of time. And without any federal protections, they often featured very long vesting periods of 10 or 20 years before a worker could qualify for a pension.

Most workers did not qualify for a pension at all, and there were large disparities by income. In 1980-81, before the mass exodus away from pension plans, only 27 percent of new retirees qualified for a private-sector pension. Only 3 percent of workers in the lowest-poverty quartile received a private pension, compared to 51 percent among the wealthiest quartile.

These numbers have not changed much over time. Among Baby Boomers retiring today--who would be the most likely group to have a pension--the typical retiree cannot rely on a private pension as the sole source of retirement security. Among retirees in 2012 aged 65 or older, only 26.8 percent received a private pension or annuity, and large gaps across income levels remain. (Paragraph updated on 4/18.)

So while it's tempting to look for blame as to why Americans are bad savers, the truth is private-sector pensions were never providing retirement security to the masses.

This is even more evident when you look at the issue on a historical basis. The graph below comes from the Boston College Center for Retirement Research. It shows the ratio of wealth to income by age across the last three decades. Each colored line represents one year, a snapshot in time. If the death of defined benefit pensions were really the cause of poor saving habits, we should expect to see a steady decline from the earlier years to the later years as more corporations abandoned their pension plans. But that's not what shows up at all. Instead it looks mostly like a jumble, with the year 2007 looking pretty good (when the stock market and housing prices were both at high points) and 2010 and 2013 being slightly lower than the rest (after one of the largest stock and housing market declines of all time). The rest all look pretty much the same.

BC Retirement Risk Index over time.PNG 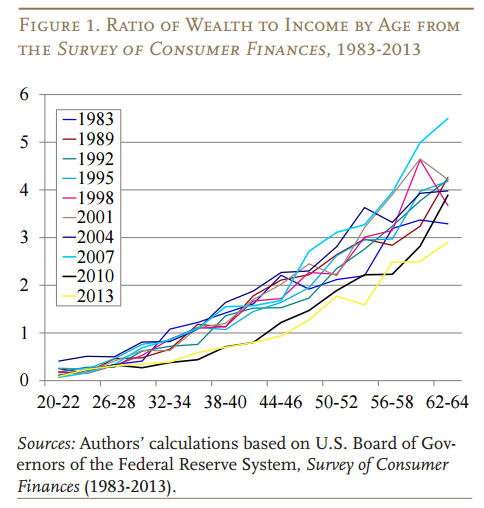 From a retirement perspective, the percentage of workers participating in an employer-provided retirement plan has held relatively constant for decades, and total retirement wealth has also remained steady despite the move to DC plans. Another report from the Boston College Center looked at this DB-versus-DC question head-on. It showed a clear decline in wealth from defined benefit pension plans, but an equal increase in wealth from DC plans. On balance, the two canceled each other out, and the report found that, "the accumulation of retirement assets has not declined as a result of the shift from defined benefit to defined contribution plans." In regards to the common perception that the shift to DC plans harmed retirement saving, the Boston College researchers concluded that, "We are going to have to change our story!"

BC Total Retirement Wealth over time.PNG 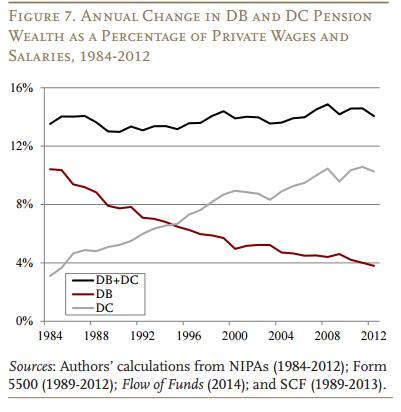 None of this is to say that we should be sanguine about the current state of retirement security in this country. We should continue to bolster the safety net to ensure all workers have access to a secure, comfortable retirement. Defined benefit pension plans never met those goals, however, and mourning their passage is longing for a bygone era that never existed.