Illinois’ $111 billion unpaid pension debt--over half of which is due to teachers--has prompted talk over a federal bailout. Illinois policymakers continue debating fixes without any real long-term solutions, let alone a budget.

But the $58 billion question remains: how well are Illinois teacher pensions actually serving its workers?

Unfortunately, not that well. Despite its high price tag, Illinois’ teacher retirement plan is doing a poor job of serving the majority of its teachers.

Last week, Chad Aldeman, Daniel Fuchs, and I released a report that examines the benefit structure for Illinois’ teachers. New teachers, in particular, face substantially lower retirement benefits than teachers hired before the recession. In 2011, in response to worsening financial conditions, the state legislature created a less generous plan for new teachers called “Tier II.” Tier II imposes on teachers a higher minimum service requirement (up from five to 10 years, making it more difficult for new teachers to qualify for a minimum benefit), a higher normal retirement age (meaning teachers have fewer retirement years to collect a pension), a less generous pension formula (calculating the final average salary from the last eight years of service instead of just four), and a lower, uncompounded cost-of-living adjustment (COLA).

The graph below compares Tier II benefits for new teachers to the prior Tier II plan. Notice how the red line dips negative for the first two and half decades of a new teacher’s service. This means that a 25-year old Illinois teacher hired after 2011 won't receive a net positive retirement benefit until she's worked at least 26 years. Until then, she’ll pay a penalty just to participate in the system. 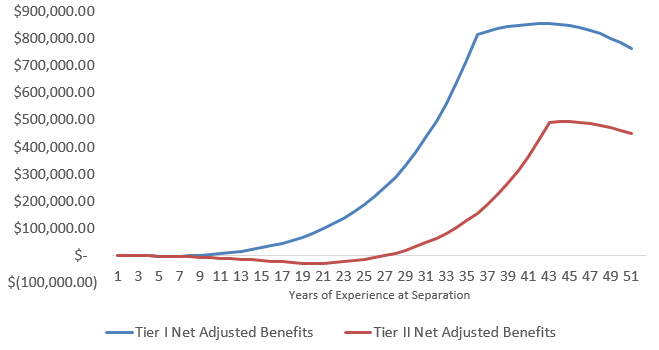 Over three-quarters of new Illinois teachers are expected to end up with negative net benefits at retirement. High minimum service requirements and lack of Social Security compound these issues further. By switching to an alternative plan, such as a smooth accrual defined benefit or defined contribution plan, the state would ensure that all teachers come out with a net positive.