How Do Teacher Pension Plans Encourage Teachers to Retire? An Explainer

Ever wanted to work less and earn more? It’s difficult to pull off, but the majority of teacher pension plans actually incentivize employees to exit at a predetermined age, quietly penalizing those who continue to work. This system deters experienced educators from continuing in the classroom, and recent data suggests it may have negative effects on students, too.

But first, how to account for the drop-off? Teacher pension formulas usually include the following variables: years of service, final average salary, and a benefit multiplier determined by individual states and plans. In the example below, in a state with a 2 percent multiplier, a teacher with 25 years of experience and a final salary of $50,000 would earn an annual benefit of $25,000. Mathematically, it looks this:

These formulas translate into a back-loaded structure where benefits are low for many years until, as teachers near their normal retirement age, their pension wealth accelerates rapidly. While the actual formulas vary state to state, the graph below presents a typical accrual pattern. Early on and up until the midpoint of his career, a teacher’s retirement savings increase only marginally year over year. In fact, in the median state, teachers must work for a minimum of 24 years before their lifetime pension benefits are worth more than their own contributions plus interest. Once they reach that break-even point though, their benefits accrue rapidly. We (and others) have broken this down before. But what happens after teachers reach the pension peak? 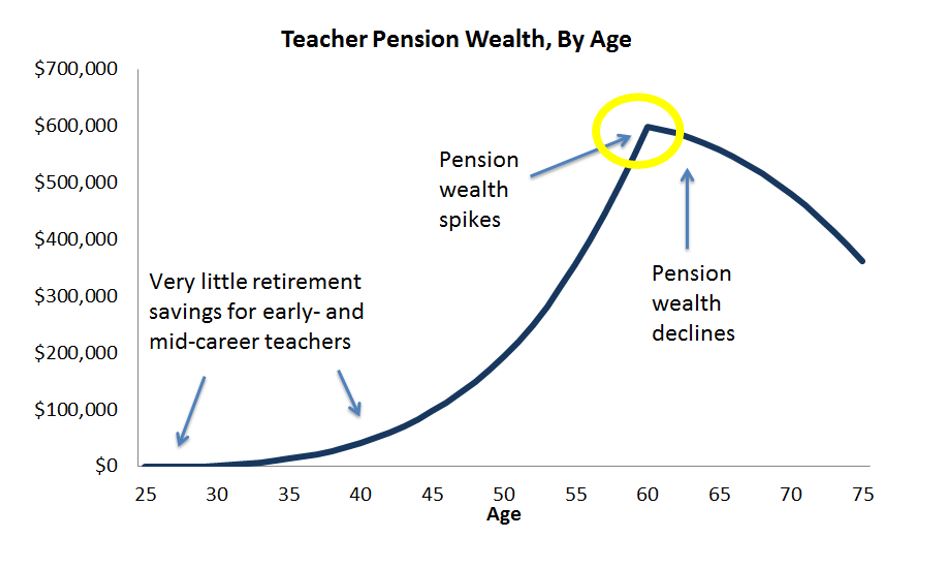 This gets interesting. The peak in pension wealth usually occurs at the state's pre-determined normal retirement age. In the example above, a teacher reaches normal retirement age at 60 years old. At that point, she is eligible to begin collecting her pension; each year she stays in the classroom, she forgoes a year of pension payment.

If our teacher retired this school year, her pension plan would begin paying her $45,000 right now. But what if she doesn’t retire? She’s an experienced professional who enjoys her students, and let's say she wants to serve as a mentor to new teachers. She decides to stay another three years, and retires at 63. She now has 38 years of experience*, and her salary has risen a bit now, to $68,000. Here’s her updated annual benefit:

While her annual benefit has increased by $6,180, she has forgone three years of payments of at least $45,500 – that’s more than $137,000 in total. Even if we ignore the time value of money ($1 today is worth more than $1 in the future), it would take her 22 years to make up the difference. On average, she'd be expected to live 23 more years into retirement, so she'd be making a slim wager that she personally would live longer than average. And remember, she had to work an extra three years compared to her peers! Despite her passion for the profession, it’s in her financial best interests to retire at 60.

This is problematic. On one side, it could encourage teachers who are a few years short of normal retirement age to stick it out in a job they are less than invested in, just to maximize their pension benefits. On the other end, the peak pushes effective veteran teachers who enjoy their work to leave early, lest they lose money.

Perhaps unsurprisingly, this pull and push on veteran teachers has an impact on students. A new report from the Manhattan Institute suggests that switching a school system’s retirement offering from lumpy, traditional pension plans to a plan with a steadier accrual would likely increase the number of late-career teachers that postpone retirement. This, in turn, would increase the school system’s total teacher experience level, and, ultimately, the school system’s total teacher quality. Not only would teachers benefit from a better retirement system, but kids would too.

*Some states cap the number of years teachers can claim for pension purposes, but let's ignore those for now, because they would make this situation even worse.