How Chicago Gets Double-Taxed At the Expense of Its Students

The Chicago Public Schools’ recently released its 2016 budget and it has a clear message for state legislators: Chicago needs more state pension funding. Unlike the rest of Illinois, Chicago only receives a small sliver of pension funding from the state. 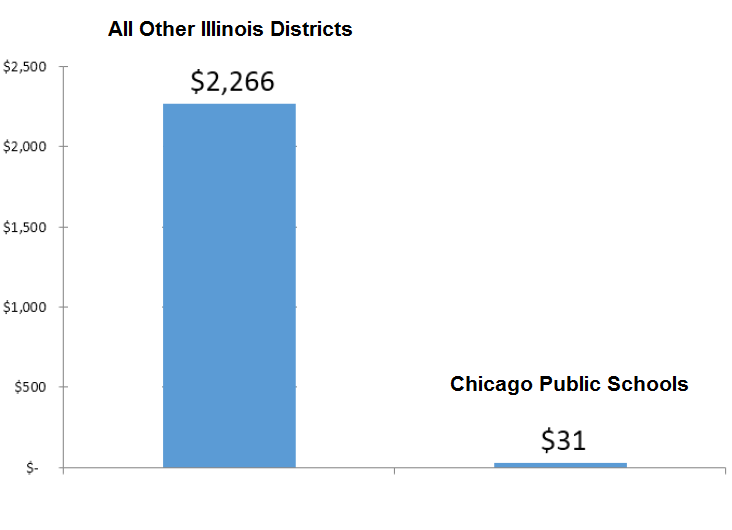 Why is Chicago treated differently? A short-sighted deal made a decade ago can help explain the gap. After a school budget crisis in 1995, the state gave CPS permission to funnel tax money directly into the district’s operating budget rather than the Chicago Teachers’ Pension Fund (CTPF). In exchange, CPS had to cover the primary costs of the fund’s pension contributions, but only if the fund was at least 90 percent funded (which CTPF was at the time). In the short-term, it was a good deal for the district; CPS was allowed to collect $2.0 billion in levied tax revenue over 10 years while making no payments to the pension fund.

But what was initially a sweet deal has massively backfired. Over the years, pension costs have skyrocketed while state pension funding for the city has dwindled. While state legislators had originally promised an amount equal to 20 to 30 percent of the contributions made to the state retirement system, today Chicago receives less than a third of one percent in teacher pension funding.

That means Chicago residents are responsible for funding nearly all of its teacher pension debt. Unlike suburban and downstate residents, Chicago residents pay taxes that go toward the Chicago Teachers’ Pension Fund and the Illinois Teachers’ Retirement System. This isn’t a fair deal considering that Chicagoans only have access to the city’s schools, yet they are being asked to pay off mounting debt from both the state and the city retirement systems.

In turn, pension debt crowds out operational funding for Chicago teachers and students. This year, the Chicago Public Schools paid $634 million in pension costs, or the equivalent of $1,600 per student.

The solutions to these problems won’t be easy. Chicago Mayor Rahm Emmanuel has proposed combining the Chicago fund with the state fund and eliminate the double taxation. Illinois Governor Bruce Rauner has proposed providing Chicago with additional funding, but only in exchange for labor concessions. A better carrot would be to provide state funding in exchange for enrolling all new Chicago teachers in retirement plan that directly ties contributions to benefits and stops accruing further pension debt. Doing so would not only ensure adequate funding and transparency, an alternative plan would also actually provide teachers with adequate benefits.

*There are roughly 1.6 million students suburban and downstate students expect to enroll. Illinois will make a $3.7 billion contribution to the state Teachers’ Retirement System on behalf of local school districts (excluding Chicago), or about $2,266 per student ($3.7 billion/1.6 million). There are about 385,000 Chicago Public School students expected to enroll in the upcoming school year. The state promises $12 million in state funds for pension funding, or about $31 per student ($12 million/385,000). Chicago residents pay state income taxes that fund the Illinois Teachers' Retirement System, while also paying local property taxes that fund the Chicago Teachers' Pension Fund.