How Charters Are Innovating on Pensions

TNTP has been following retirement options for charter schools in a cluster of states, and their preliminary findings are fascinating. Rather than relying on the state’s pension system, several charter schools are offering teachers portable retirement benefits and/or reallocating funds for salary increases or other forms of compensation.

Instead, these charters are finding innovative alternatives to traditional pensions. The schools recognize that current teachers are increasingly mobile and offer teachers portable benefits: 401(k) or 403(b) defined contribution plans. What’s more, all of the schools reported minimum service requirements of five years or less—with half of schools offering immediate vesting or within one year of employment. In a separate study conducted by the Thomas B. Fordham Institute, Amanda Olberg and Michael Podgursky looked at alternative retirement plans offered by charter schools in several key states where participation in the state system was optional. 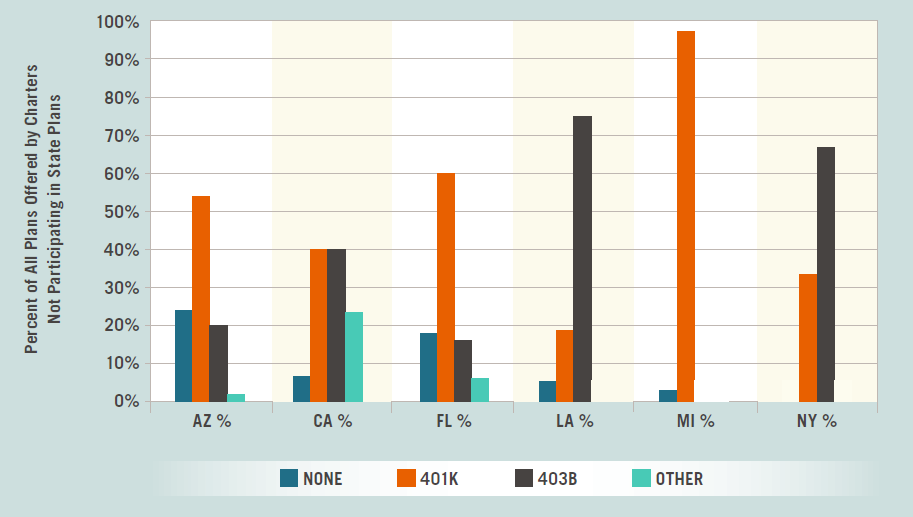 Opting out of the state retirement system also means that charters have more flexibility for reallocating retirement funds into other forms of compensation. TNTP spoke with one school that raised teacher salaries five percent higher than surrounding districts, giving that school a competitive edge to recruit top talent. Another charter network gave teachers a set amount of flexible money to pay for benefits (such as optional healthcare, vision, dental and required disability and life insurance). Anything not spent on benefits was given back to teachers as a lump-sum check at the end of the year: additional cash teachers could pocket and/or invest however they chose.

Teachers are increasingly mobile and need portable benefits that they can take with them wherever they go. Policymakers should keep an eye out on charters and what they’re doing to innovate not just in the classroom, but also in teacher retirement.