States may be getting a deal for their teachers. The Consortium for Policy Research in Education (CPRE) recently released a report on the changing trends in the teaching workforce. The authors—Ingersoll, Merril, and Stuckey—found seven trends in the data. The teaching force is simultaneously becoming: larger, older, younger and less experienced, more female, more racially diverse, and more consistent in academic ability. Important to the topic of state pension plans, the report findings mean that states have more retirees to pay for. But at the same time, states are hiring younger and more transient teachers who can be paid lower salaries and often leave before qualifying for a large or even moderate pension. It’s ostensibly a bargain for the state, but a loss for individual teachers.

The trends impacting retirement the most are the size, age, and experience of the teaching workforce. The CPRE report found that the teaching labor force has significantly increased from the mid-1980s and only recently tapered after the economic downturn in 2008. Within these increases, there has been a large increase in younger and less experienced teachers in the classroom.

The following graph shows the number of teachers and their ages: 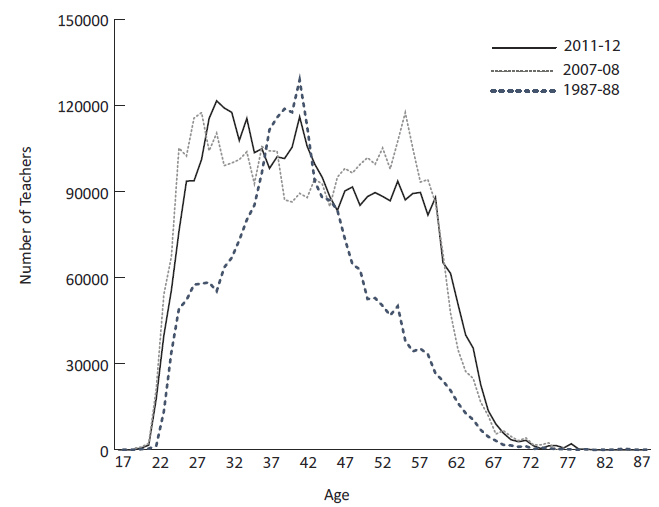 Following the data lines over time, we see some big changes. Teachers in the 1980s tended to be older, where the most common teaching age was 41. A shift occurs however in the 2000s, and the most common teaching age decreases to 30. In addition, rather than simply one peak, there are now two peaks: one in younger teachers and one in older teachers. The teaching force is both older and younger or—in the authors’ words—“grayer” and “greener.” While “grayer” teachers with more years of service will cost the state more in salaries and retirement benefits, “greener” teachers with less service years will cost less.

The next graph shows the number of teachers and their classroom experience. 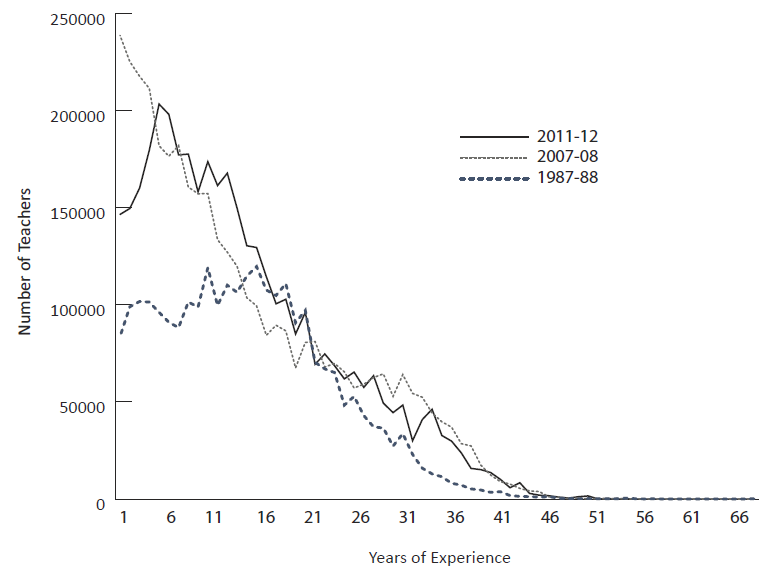 What do these trends mean for state pension systems? An increase in veteran teachers means more teachers with higher salaries and retirement benefits. However, an increase in beginning teachers means lower salaries. Plus, beginning teachers are staying in the classroom for a shorter period of time. Put together, this means more “greener” teachers are paying into the pension system, and at the same time, leaving with little if any retirement benefits. This translates to cheaper costs for the state, but at the price of their retirement savings.

*Ingersoll, Merril, and Stuckey drew their research from the recently released 2011-12 Schools and Staffing Survey (SASS) and Teacher Follow-Up Survey (TFS) collected by the National Center for Education Statistics (NCES), part of the US Department of Education. The SASS data come from a nationally representative sample of 50,000 teachers and covers a 25-year period.