Colorado, unfortunately, isn’t an exception. Some charter schools offer add-on plans, but teachers must still participate in the Colorado Public Employee Retirement System (CoPERA). CoPERA provides ample benefits for those who stay in the system for 30 or more years because benefits are backloaded, but is less than ideal for those who don't stay for a full career.

Last week, Chalkbeat Colorado reported on teacher turnover across the state’s school districts. Colorado districts with higher poverty rates saw higher teacher turnover, including the Charter School Institute (CSI)—the state’s only non-district charter school authorizer. (There are about 170 total charter schools in Colorado, and CSI currently authorizes 34 of them.) The graphs below come from the same data set. Statewide, about 17 percent of Colorado’s public school teachers left during the 2013-14 school year, and the median district had a one-year teacher turnover rate of 19 percent. CSI schools collectively had a turnover rate of 48 percent, making its turnover ratings the ninth highest in the state. 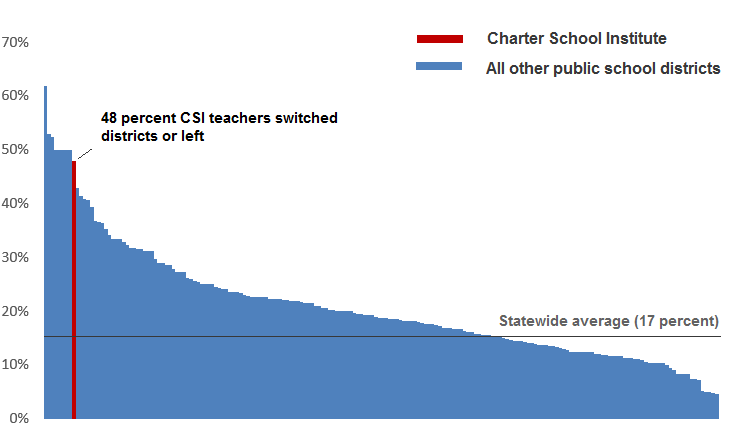 Compared to teacher turnover, CSI principals collectively had a slightly lower average turnover of 37 percent during the 2013-14 school year and ranked 39th in the state. 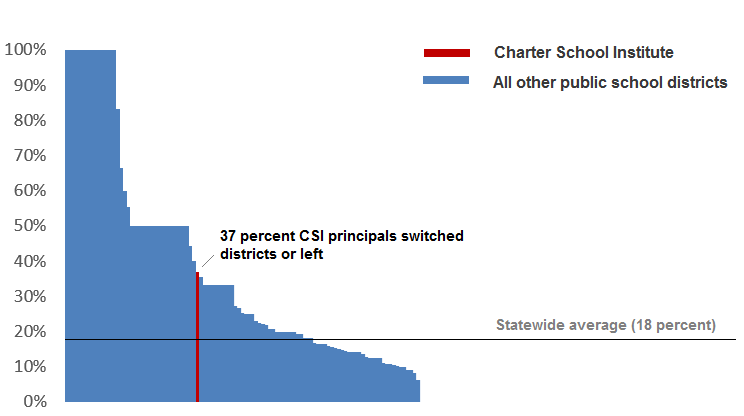 Higher turnover rates, however, also mean CSI teachers and principals, both of whom participate in CoPERA, will get less in return. Charter schools and their teachers pay the same employer contribution rates (18.35 percent) and employee rates (8 percent) as all other schools, regardless of how long a teacher has been in the system or plans to stay. In other words, charter schools pay into the system but their teachers don’t receive as much in return. Charter schools—and any other urban or rural school with high turnover—are essentially subsidizing benefits for those who stay.

This is no secret. CoPERA actuaries actually estimate future costs based on the assumption that most new teachers will leave before a full career while paying full contributions. According to the plan’s statewide assumptions, 64 percent of new Colorado teachers will not meet the requirements to qualify for the state’s defined benefit formula. For teachers and staff who stay less than five years, the state offers a money purchase plan, where teachers can get a full refund of their original contributions plus three percent interest, but they get none of their employer’s 18 percent contribution, nor do they qualify for Social Security benefits. If we use the 2013-14 CSI turnover and assume that the same proportion of teachers leave the system each year, less than four percent of teachers would remain from the original group five years later. Less than 10 percent of CSI principals would remain.

Although these data suggest CSI is an extreme example, it is by no means alone. Any district with above-average turnover is essentially subsidizing retirement benefits for those with a more stable workforce. The bigger the disparities in turnover, the more that richer districts benefit from the turnover in poorer areas.

But it's not just teachers in stable, wealthier districts who deserve secure retirements. All teachers need flexible retirement plans that allow them to earn adequate retirement savings no matter where life takes them. If Colorado and other states allowed charter schools to opt out of the state pension system, these schools could create plans that better fit the needs of their employees. Until then, they’re most likely funding the retirement benefits for everyone else.