Are Teacher Pensions Too Generous, Or Not Generous Enough?

Michael Hiltzik of the L.A. Times and Andrew Biggs of AEI had a spirited Twitter debate last week about whether state pension plans were too generous or not generous enough. They were arguing specifically about California and mostly NOT about teachers, but there are kernels of truth in both their arguments with important implications for teacher pensions.

The debate centered around Biggs’ 2014 piece on “pension millionaires,” those state and local workers who qualify for guaranteed payments in retirement worth more than $1 million. Biggs ran the numbers for full-career state workers in every state and found that it’s not that uncommon for government workers to qualify for retirement benefits worth more than $1 million.

Hiltzik’s main counter-argument was three-fold. One, these workers don’t actually have $1 million that they can spend—it’s merely an estimate of how much they’ll be entitled to based on their many years of government service. Two, the figures do not include Social Security. Since about one-quarter of public employees (and about 40 percent of teachers) do not earn Social Security, their pensions need to be larger to provide them adequate retirement savings. And three, lots of workers don’t stay a full career, and in fact pension benefits on average are much lower than Biggs’ calculations.

So who’s right? They both are! The same pension plan can simultaneously be too stingy for some workers and too generous for others. The average can be modest even as the low end can be very low and the high end can be quite high. To show what this looks like, consider the graph below, which shows how retirement benefits grow over time for Colorado teachers (I’m using Colorado here as an illustrative example, but California and other states would have similar trajectories, and neither state offers teachers Social Security). 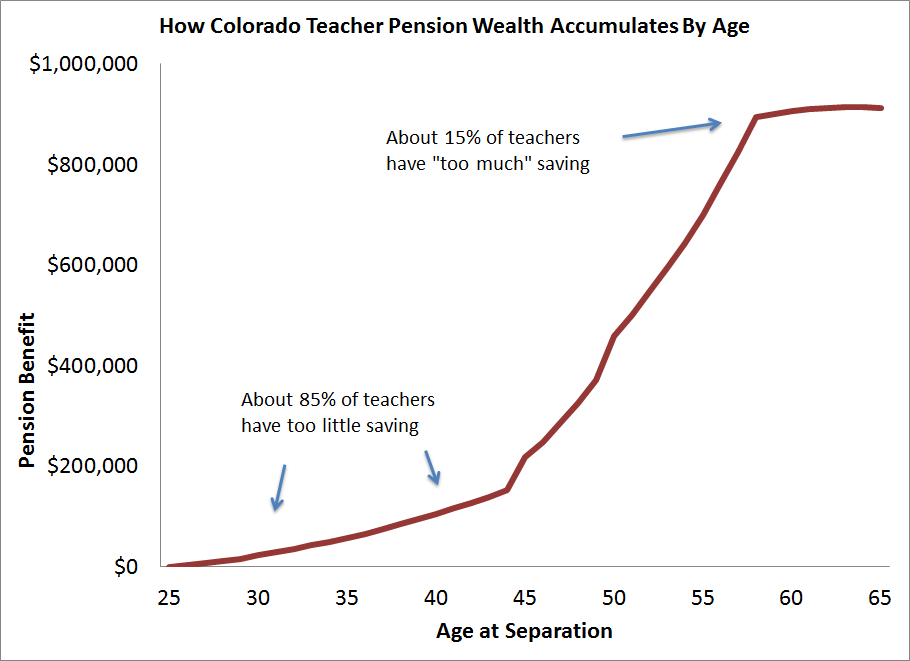 Retirement savings grow very slowly in a teacher’s early career. In fact, when we tried to estimate how much a teacher needs to save today in order to have a secure retirement tomorrow, we found about 85 percent of Colorado teachers are on the too-low side. The pension plan is not generous enough for them.

But a Colorado teacher following the graph above qualifies for a steep ramp-up in her benefits at the back-end of her career. Her retirement wealth will quadruple between the ages of 45 and 58, and she can retire at age 60 with a pension worth the equivalent of $906,000 in today’s dollars.

That doesn’t work out to a crazy-high amount in annual terms, but her “replacement rate,” a ratio comparing her pre- and post-retirement incomes, would be more than comfortable. In fact, her total savings rate would surpass what most experts think she’ll actually need in retirement. As Michelle Welch and I calculated in a brief last fall, she has more retirement savings than if she had saved 20 percent of her annual salary each year, compounded at 5 percent interest. She is probably “over-saving” for retirement and would likely be better off with a larger share of her compensation coming in the form of salary increases.

So both Hiltzik and Biggs have valid points, but there’s a danger in solving the wrong problem. If policymakers took Biggs’ argument to the logical extent, they would focus most of their attention on capping pensions and ensuring that no one became “pension millionaires.” But Hiltzik's preferred solutions of preserving or perhaps even amplifying existing plans aren’t right either. The status quo is the problem here; preserving it leaves 4/5 teachers with insufficient benefits. Simply adding to existing formulas won't solve that problem. Because pension plans are extremely backloaded, boosting the formula gives a little bit more money to early- and mid-career workers and a LOT more to full-career workers. That would amplify rather than solve the fundamental fairness problems within existing pensions plans.

That’s why our approach here at TeacherPensions is to focus primarily on the lack of generosity buried in most teacher pension plans. Too many teachers are losing out on the chance of a stable, secure retirement. It’s not fair--nor is it worth the political fight--to take away from the “winners” who played by the rules of the current system. On the other hand, the problems can’t be solved with the same old formulas. We have to do something different.