Why Do Private School Teachers Have Such High Turnover Rates? 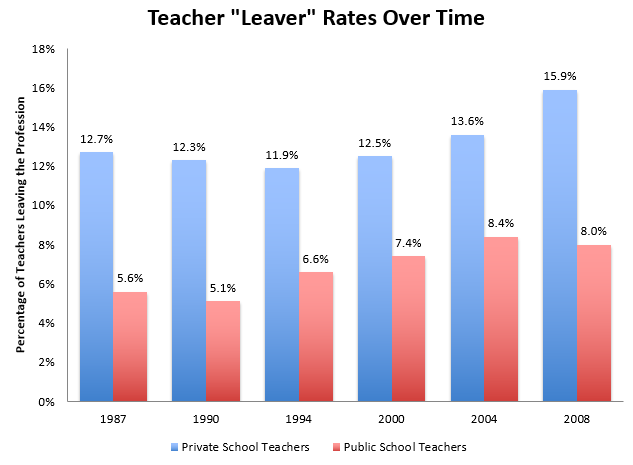 The next graph shows how the "leaver" rates have changed over time for public and private school teachers, by their years of experience. Over time, private schools have seen dramatic increases in turnover among early-career teachers, whereas in the public sector, early-career teachers are more likely to stay today than they were in the late 1980s. In fact, private school leaver rates have accelerated faster than public school rates for every age group except those with 20 or more years of experience. (As my colleague Chad Aldeman has written, those late-career turnover increases can be traced at least partially to changing demographics and rising retirement rates.) 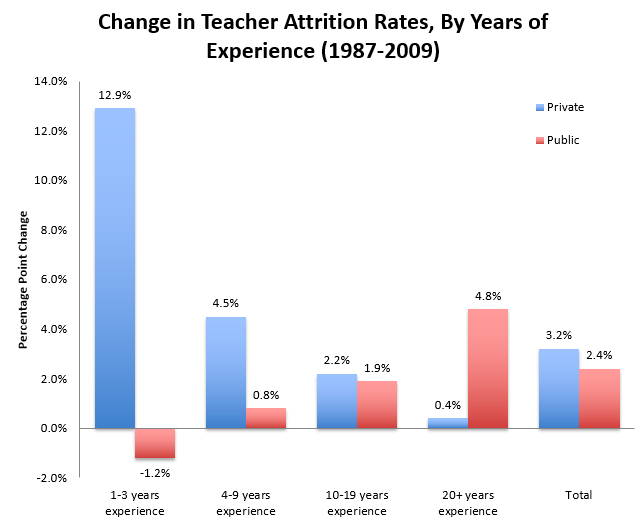 But compare that finding to private school teachers, where we see a noticable difference across cohorts. Rather than the lines overlapping, signaling similar turnover rates, we see clear gaps across entry years. In the private sector, unlike in public schools, teachers who entered in 1987 had higher retention rates than teachers who were hired in 1990, and so on. Those gaps are smaller in more recent years, but the NCES data suggest that far fewer private school teachers today are making it to key career milestones than did in the past. 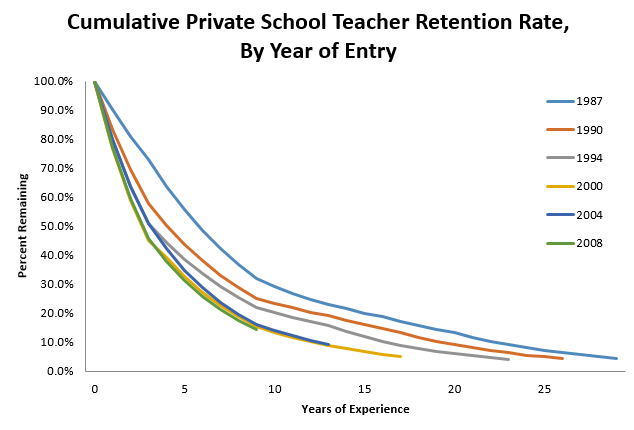 Since the cohort graph is somewhat hard to read, see the same data in the table below. Each column represents a starting year, and the rows indicate the cumulative retention rate by years of experience. Private school teachers who leave within three years of experience provide an especially compelling example. Among new private school teachers in 1987, a little over one-quarter had left within three years. In 2008, more than half were gone within the same time frame. Again, these are much higher figures than for public school teachers.

Since this is a pension blog, it's worth mentioning that we do NOT think pensions are the cause of, or solution to, this issue. First, while public sector teachers are more likely to be enrolled in defined benefit pension plans, that disparity existed in the 1980s as well. That is, it can't explain the changes over time, nor can it explain the changes by age group. Second, while pensions could theoretically boost teacher retention, in practice we don't actually see much evidence of that. We don't have plausible theories for why turnover in private schools seems to be rising much faster than it is in public schools--although we'd love to hear suggestions--but as the country considers making additional public investments in private schools, it's worth wondering why these schools are losing so many of their teachers.