What Happened to Wisconsin's Teacher Workforce After Act 10? Not Much

Over the summer, the Supreme Court ruled in the Janus v AFSCME case that public-sector unions can no longer collect "agency fees," the mandatory fees that unions charged employees to cover the costs of collective bargaining. The court ruled that agency fees were an unconsitutional form of forced speech, since collective bargaining in itself is a political act. (For more on the details of the case, see this comprehensive explainer deck from my Bellwether colleagues.)

The conventional wisdom on the effects of Janus seems to go like this:

1: With the loss of agency fees, teachers unions will have fewer paying members and thus smaller budgets.

2: With smaller budgets, teachers unions will be less effective at lobbying for change on behalf of their members, and teachers will have lower salaries and worse working conditions.

But what if these issues are not as directly related as theory might predict? My thinking on this question was challenged by an academic paper that came out a few months before the Janus case was decided. In that paper, political scientist Agustina Paglayan looked at the timing of when states adopted collective bargaining and how that related to changes in teacher salaries and overall education spending (see an Education Week write-up here, or read the full study here). Paglayan found that states with high education spending and high teacher salaries were more likely to become unionized. In fact, the notion that teachers unions caused teacher salaries to rise appeared to be backwards: Places that were already investing in public education and paying their teachers well were also likely to allow those teachers to unionize. Paglayan's paper included state-by-state graphs showing that unionization often followed large increases in school spending and teacher salaries, not the other way around.

If we apply the lessons from Paglayan's research, the Janus case may well weaken unions, but we should decouple that effect from predictions about changes in education spending or teacher salaries. The connection between teachers unions and the teacher workforce may not be as tight as the conventional wisdom might predict.

The recent history in Wisconsin presents a useful modern comparison. In 2011, Wisconsin Governor Scott Walker signed a controversial piece of legislation known as Act 10. The bill restricted collective bargaining to base wages, required annual recertification for bargaining unit representation, and raised teacher contribution rates to the state pension and health care systems. Many observors predicted these changes would devastate the teacher workforce in Wisconsin.

We already have some preliminary results, and Wisconsin teacher union membership and union revenues did indeed go down. There's also been some preliminary research suggesting that more Wisconsin school districts are experimenting with differential pay, which may create a more uneven spread between winners and losers.

But the more drastic predictions about the demise of the Wisconsin teacher workforce have not transpired. Today, there are more educators working in Wisconsin schools (over a time when student enrollment actually dipped slightly), and average salaries have kept up with other states (although not inflation, see more below). After an initial surge of retirements when the law passed in 2011, things have returned to normal. Meanwhile, turnover rates, salary growth rates, median years of experience, age, and retirement rates all look pretty much in line with long-term trends. And regardless of who wins the governorship tomorrow, school spending is likely to rise in the immediate future: Both Walker and his Democratic opponent, state schools superintendent Tony Evers, have proposed significantly more education spending.

To see how things are changing over time, I looked at the latest version of the Comprehensive Annual Financial Report (CAFR) of the Wisconsin Department of Employee Trust Funds (ETF). This report compiles results and assumptions about different types of public servants, including teachers, who receive benefits through the Wisconsin Retirement System (WRS). The report breaks out the results by broad categories. It lumps all educators including school support personnel into one "Teacher" category, but classroom teachers represent the bulk of the category, and the data are broadly illustrative about the people working in Wisconsin school districts. Here's what the data show:

Leading up to 2011, Wisconsin was shedding public-sector jobs, especially in education. After Act 10 passed in 2011, Wisconsin was slow to rebuild its teacher workforce, but it has happened over time. Today, Wisconsin is back to about where it was in 2010. Meanwhile, K-12 student enrollment has fallen by about 0.5 percent over this same time period. 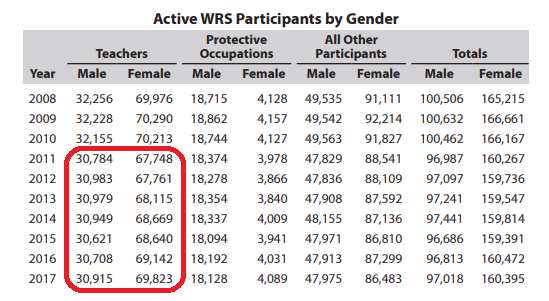 As we've written before, Act 10 did seem to lead to a large exodus of workers right when it passed. This surge may have led people to believe this was a new normal, but in subsequent years the number of workers retiring each year has returned back in line with its prior baseline. Contrary to what we might expect, this mass exodus of veteran teachers did not seem to harm student achievement. This is consistent with evidence from the retirement world, where early retirement programs that induce many veteran teachers to retire have not led to declines in student performance. 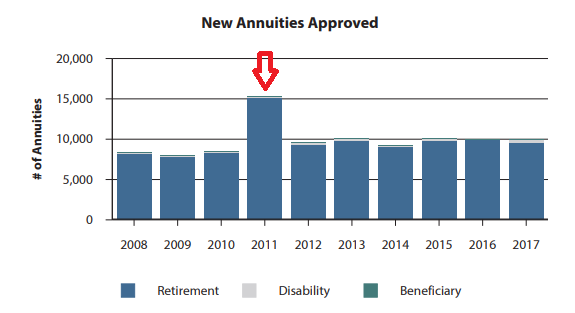 In fact, the teacher workforce in Wisconsin today looks pretty similar to what it looked like in the past. Since Act 10 passed in 2011, the average age of Wisconsin teachers has dropped from 43.5 to 43.3 years old. It hasn't budged at all since 2013. 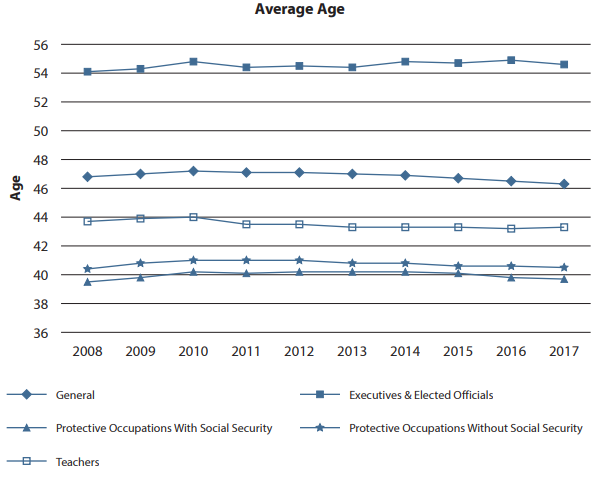 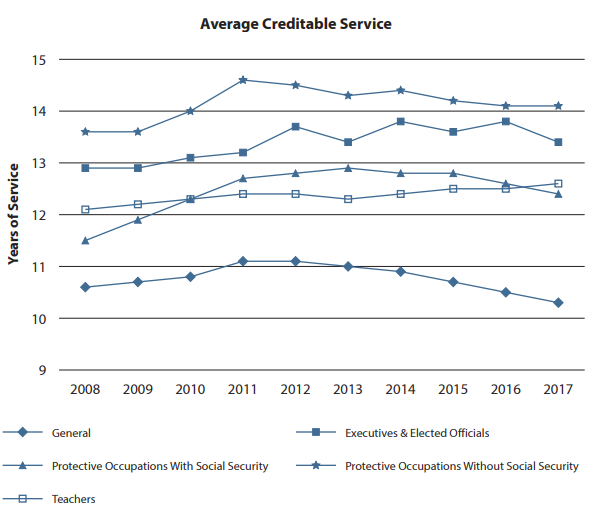 Average salaries show a similar trend. The graph below is in nominal dollars, so it presents a slightly rosier picture than what Wisconsin teachers might be feeling. In inflation-adjusted terms, Wisconsin teacher salaries are lower today than they were in previous decades. But you could have said the same thing at the end of 2010, before Act 10 passed. In real terms, average teacher salaries in Wisconsin were much higher in the late 1980s. Act 10 had nothing to do with this long-term decline.

The slide in average teacher salaries is also not unique to Wisconsin. In real terms, teacher salaries have been flat or declining all across the country, and the changes in Wisconsin in recent years put it in the middle of the pack on this metric. 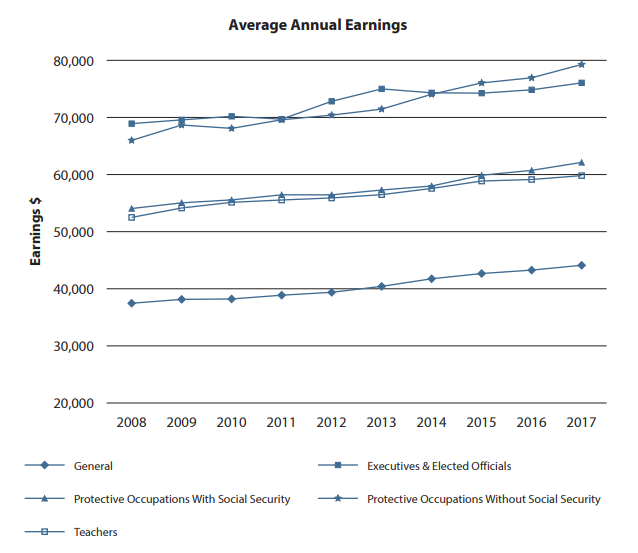 Again contrary to popular perception, public school employees in Wisconsin have comparable turnover rates as other public-sector workers, with the exception of a small group of protective service employees who do not receive Social Security. (In this context, "termination" means employees leaving the pension system. That is, teachers who transfer schools or districts are not counted in this statistic.) 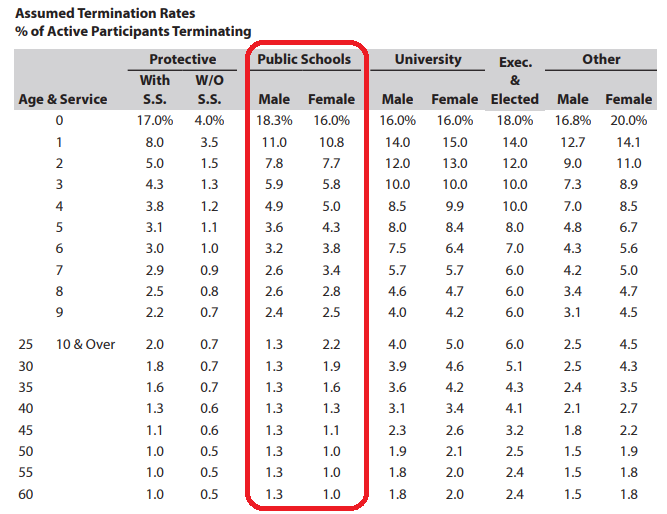 Wisconsin teachers also retire at younger ages than their public-sector peers (and much earlier than the typical worker in the private sector). According to this chart, the WRS assumes that 36 percent of male public school employees will retire when eligible at age 57, compared to 18 percent of similar general state employees. On a cumulative basis, that means very few Wisconsin teachers remain in the classoom into their 60s, and they have different retirement patterns than general state employees or university employees, despite them all being enrolled in the same retirement plan. 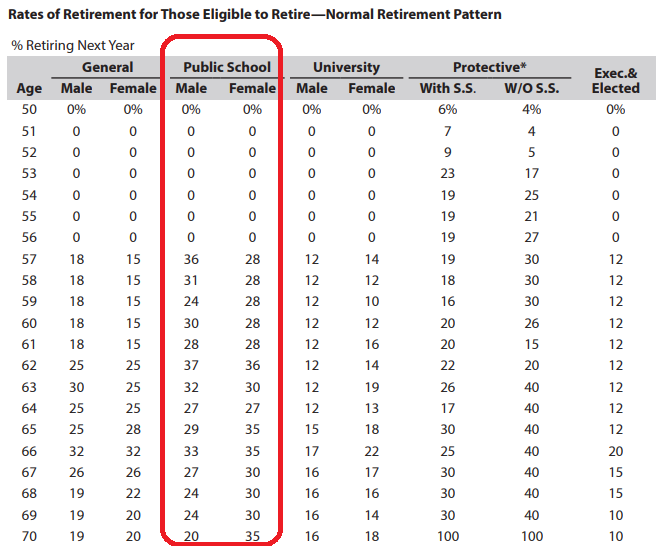