What Do Pac-Man and Pensions Have in Common?

It’s not for lack of money. Even after adjusting for inflation and rising student enrollment, total school spending is up.

It’s not for lack of money spent on teachers, either. Districts are allocating about the same portion of their budgets to instructional costs—including salaries, wages, and benefits for teachers—as they did 20 years ago.

So overall expenditures are up, but teacher salaries are actually down slightly over the same period. In our new report, “The Pension Pac-Man: How Pension Debt Eats Away at Teacher Salaries,” we show that, like the proverbial Pac-Man, the rapidly rising costs of teacher retirement and insurance benefits are pushing out money that could be spent on salaries (Figure 1 from the paper). Once those benefit costs are factored in, teacher compensation has risen faster than inflation.

Salaries vs Benefits vs Inflation.PNG 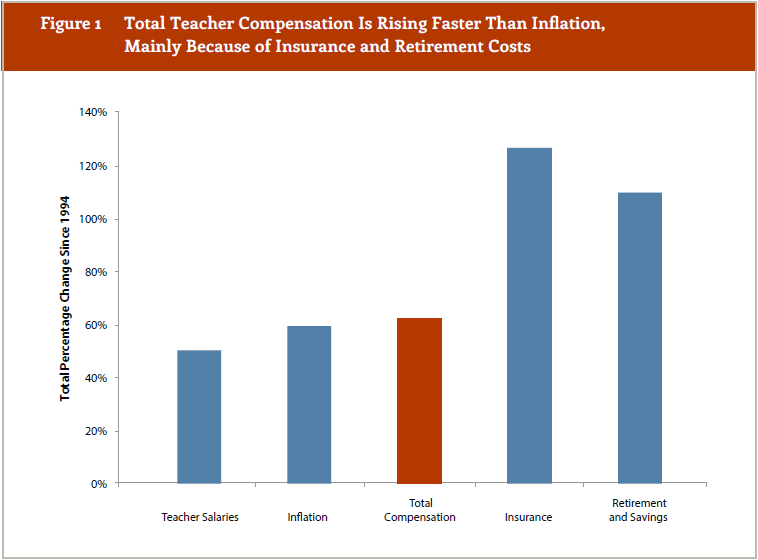 Rising insurance costs have affected all American workers, but they are hitting teachers even harder. Compared to other groups of workers, insurance costs rose especially fast for teachers, and they now eat up 10.2 percent of a teacher’s total compensation, up from 7.3 percent in 1994.

The good news is that insurance costs have begun to moderate. In the wake of the 2010 passage of the Affordable Care Act, insurance costs, as a percentage of total compensation, began to decline for all workers, including public school teachers. 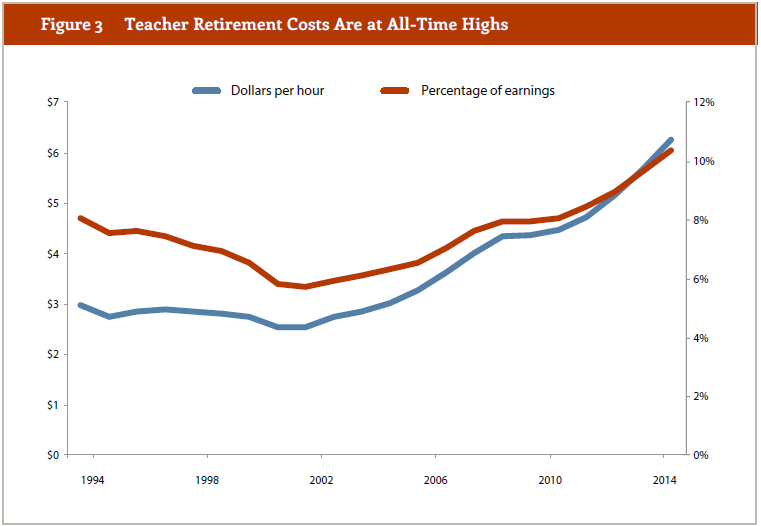 It may be counterintuitive, but higher retirement contributions have not translated into better retirement benefits for teachers. In fact, in the wake of the recent recession, states accelerated a trend of offering newly hired employees less generous benefits than what was provided to their older peers. Even as employer contributions toward teachers’ retirement plans are at all-time highs, those same employers are actually offering new teachers worse benefits. After all those cuts, today is the worst time to become a teacher in decades, at least in terms of net retirement benefits.

What's causing this situation? Unfortunately for teachers, the rising costs of their retirement systems do not reflect improved benefits, it's primarily a function of debt. Within pension systems, there are two types of contributions: the cost needed to provide benefits (called the “normal cost”) and the cost of paying down debt (called “amortization costs”). The normal cost is the amount of money a pension plan projects it needs to contribute now to pay benefits in future years. The amortization cost is the amount required to pay down any accrued debt.

If pension costs were rising because normal costs were rising, that would reflect an improvement in teacher benefits. But that’s not what’s happening: Today, amortization costs, not normal costs, make up the biggest proportion of employer retirement costs. And now, for every $10 states and districts contribute to teacher pension plans, $7 goes toward paying down past pension debt, and only $3 goes toward benefits for current teachers.

It’s commonly accepted that public-sector workers such as teachers trade lower salaries for higher job security and more generous benefits. But that trade only works well for workers who actually stick around until retirement. Most teachers get the worst of both worlds—they earn lower salaries while they work and forfeit retirement savings when they leave (watch the short video below for examples on how this works in practice).

Since it can be somewhat abstract for teachers to think about pension debt and how it affects them, the report also shows what teacher salaries might look like if districts were able to spend the money on salaries rather than debt (see the full report for state data). Total contributions range from a low of 6 percent of salary in Florida to a high of almost 50 percent in Alaska. Alaska is a unique case in that it officially closed its pension plan in 2006, but it is still paying off large accrued debts. Excluding Alaska, Illinois is the highest in total contributions at 33.6 percent of salary. Another 10 states—California, Connecticut, Kentucky, Louisiana, Massachusetts, Michigan, New Jersey, Pennsylvania, Rhode Island, and West Virginia—are all paying more than 20 percent of teacher salaries straight into their pension funds.

Most of these costs are going toward debt. On average, states and districts are contributing 4.9 percent of teacher salaries toward actual benefit costs. This is maybe a bit more than most private-sector workers receive, but it's not overly generous; it would be comparable to 5 percent employer match on a 401k plan.

But what's really crimping into school budgets are the debt costs. States and districts are now contributing an average of 12 percent of teacher salaries every year just to pay down large unfunded liabilities, a result of politicians over-promising and under-saving. For the average American teacher, that's equivalent to $6,800 a year in money that could be going in their pockets but instead must be put into preserving inequitable pension systems. 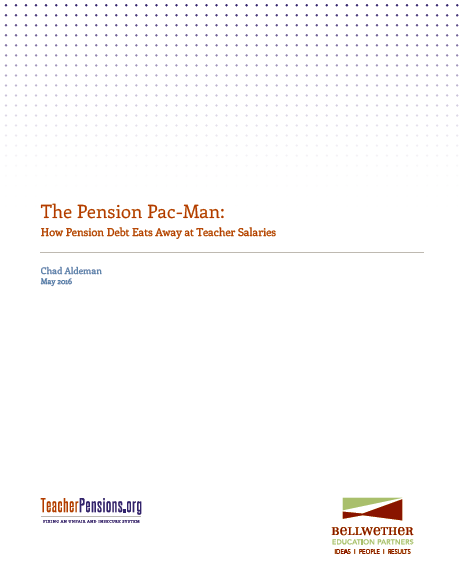 Without a change, this situation is likely to get worse, not better. Policymakers must consider new ways to provide retirement benefits to teachers so states can reverse the slide. Regardless of the model chosen, teachers would be better off if their retirement savings were tied directly to the contributions made on their behalf. If states continue to preserve their existing pension systems at any cost, teachers will see the Pension Pac-Man eat further and further into their take-home pay.