What the Federal Government Can Teach Us About Retirement

About 2.7 million workers—1.8 percent of all Americans—are covered under one of two federal retirement programs, and earlier this fall the Congressional Budget Office (CBO) released a report reflecting on changing benefit systems and considering further changes to those plans. The report has some useful parallels to the retirement plans offered to teachers; here are two main takeaways:

From 1920 through 1983, federal workers were enrolled only in a defined benefit pension plan. It was generous for full-career workers, but less so for short- and medium-term workers, and at the time federal workers did not have access to the portablee, progressive benefits offered by the Social Security program.

Starting in 1983, though, Congress cut the defined benefit component essentially in half, added a 401k-like defined contribution element, and began enrolling all new workers in Social Security. The CBO found that this three-legged approach provides much more portable benefits to workers with similar replacement rates in retirement, at a much lower and more predictable cost to the government. Although the CBO does see evidence that the switch lowered retention rates somewhat, the effects were small, much smaller than a subsequent retention boost observed after pay raises.

As we've written before, we see similar patterns among teachers.  Too many states are still operating stand-alone defined benefit plans without Social Security and without any elements conducive to portability. Among the teachers who get close to retirement, pensions do exert a “pull” retention incentive as they near their retirement age, but several studies have found a much larger “push” incentive at the back end, effectively encouraging veteran workers to retire when they might have more to give. When states have reformed their teacher pension plans in the past, the effects on teacher retention have been minimal.

The graph below shows the net value of the federal pension plan for employees who started after 1983. Importantly, it shows three lines. Each of these lines captures the same gross benefit—that is, all workers since 1983 have the same pension rules about when they qualify for a pension, the formula for that pension, and when they can retire and begin collecting their benefits. The only difference is the amount of money the employees themselves must contribute to receive this identical benefit.

But once the contribution rates rise for the same benefits, the results start to look different. The middle line represents the net benefit for workers hired between 2011 and 2013. Because they must contribute 3.1 percent of their salary for the same benefit, their net pension benefit doesn’t reach positive territory until they’ve been on the job for 16 years. Now look at the bottom, blue line. This is what the federal pension benefit looks like today, for all workers hired since 2013. Their required contribution rate is 4.4 percent of salary, and their net pension benefit will be negative for their first 20 years of service. 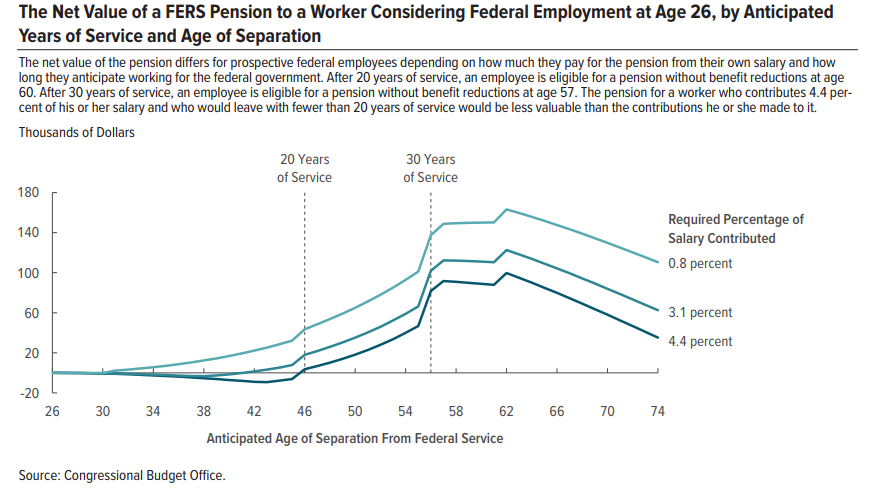 Even with the recent increases in employee contributions, it isn’t enough, and Congress, per the CBO report, is considering a range of different options, including further increasing contribution rates or cutting benefits.

These trends are hardly unique to the federal government. States are in the midst of their own contribution increases and benefit cuts, and as a result today’s teacher retirement plans are worse than those offered to prior generations. In the median state, a new young teacher today has to remain for 25 years before her pension benefit cross into positive territory.

The CBO also includes an extensive analysis of different options for further reforming the system in the future, including shifting to a pure defined contribution system with employer matching contributions of 10 or 15 percent of pay. The authors conclude that such proposals could offer similar total retirement benefits to workers at a lower overall cost. Read the full CBO report here.