What Does Rising Teacher Turnover Mean for Teacher Pensions?

Matthew Di Carlo had an excellent post on teacher turnover over at the Shanker Blog a few weeks ago. Pulling data from the Teacher Follow-Up Survey (see Table 1 here), he created the graph below showing changes in teacher turnover over time. For each given year, the blue line represents the percentage of teachers who left the profession, the red line represents the percentage who move schools, and the green line is the sum of those two sources of turnover. For a variety of reasons, over the course of two decades total teacher turnover in the U.S. increased about two percentage points, from 13.5 percent to 15.5 percent. 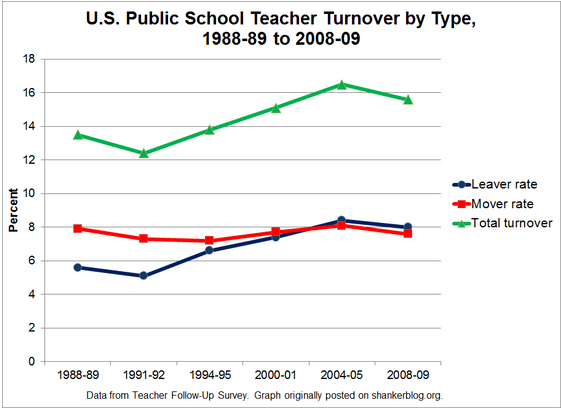 Di Carlo spends some time analyzing the trend and discussing potential causes, so you should read his post. Here, I want to spend a bit of time thinking about the components of teacher experience levels and how they interact with pensions. Total Teacher turnover is the combination of several factors:

Finally, it’s worth noting that the one-year turnover rates appear misleadingly low. They indicate the percentage of teachers leaving within one years’ time. But even low one-year rates become significantly amplified over longer periods of time. For example, assuming that the national average holds true for teachers at all levels of their career, a one-year rate turnover rate of 13.5 percent, as in 1988-89, converts to a 52.5 percent turnover rate over five years. The actual long-term turnover rate is probably a bit lower than this, but it's important to think about how short-term figures translate into longer-term effects. High turnover rates have consequences for schools, districts, and state pension plans, not to mention the individual teachers who leave.