The following is a guest post from Robert M. Costrell, Professor of Education Reform and Economics at the University of Arkansas.

The crippling explosion of pension costs for the Chicago Public Schools has captured national attention. Although the Chicago case is extreme, the problem is widespread. Pension costs are rising across the country, even after several years of recovery from the market crash of 2007-09. A natural measure of the rise in costs is the rise in real per pupil expenditures for employer pension contributions. In this blog, I provide what I believe to be the first estimates of employer pension costs per pupil for the nation as a whole. I estimate that nationally these costs have more than doubled in the last decade, from about $500 per pupil in 2004 (in $2015) to over $1,000 today. This does not include contributions to Social Security, the costs of retiree health benefits, or the pension contributions of the school employees themselves. 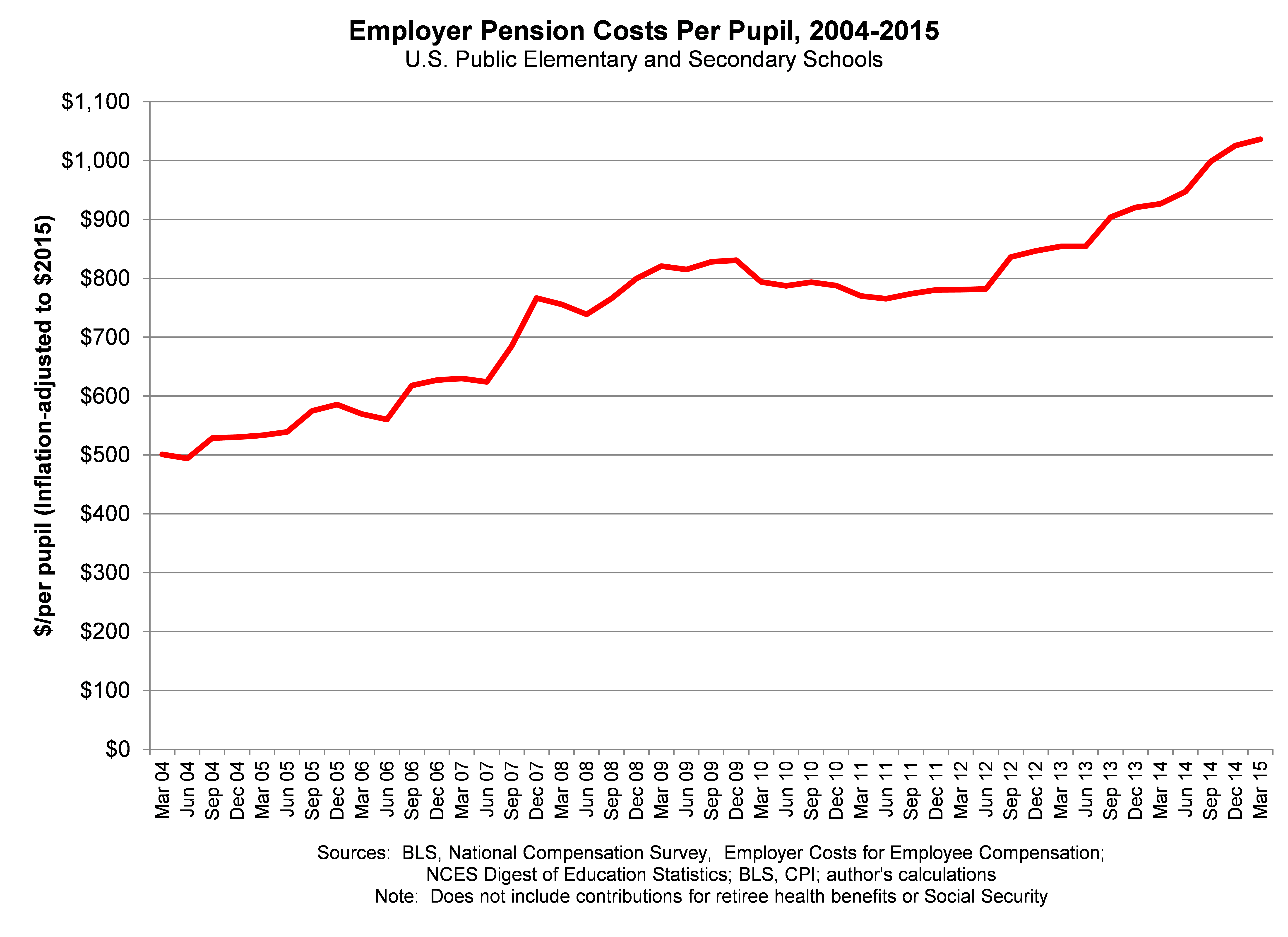 These estimates are constructed from two main sources of data: the National Compensation Survey of the U.S. Bureau of Labor Statistics (BLS) and the U.S. Department of Education’s National Center for Education Statistics (NCES). The BLS series discussed below allows us to calculate employer contributions for retirement as a percent of wages and salaries in public K-12 schools and the NCES Digest of Education Statistics allows us to calculate total salaries per pupil. The product of the two gives us employer contributions per pupil, and these are adjusted for inflation using the Consumer Price Index (CPI).

Specifically, the BLS National Compensation Survey collects the most comprehensive national compensation data in its Employer Costs for Employee Compensation (ECEC) series. The ECEC breaks down compensation into wages and salaries and various benefits, of which the relevant one here is “Retirement and Savings.” For the public schools, this cost is almost entirely contributions to defined benefit pensions. Michael Podgursky and I have previously compared these data for K-12 public school teachers with private sector professionals, and have documented the continually growing gap between them. The ECEC also provides these data for all K-12 public school employees (not just teachers), and this is the relevant figure to examine here, to derive total pension costs per pupi.

These data are reported on a “per hour worked” basis, but can be readily converted to percent of salary using the concomitant ECEC data on hourly wages and salaries. These contributions have doubled from 7.7 percent of salaries in March 2004 (the earliest data available) to 15.3 percent in March 2015.

The NCES Digest of Education Statistics provides total salaries for K-12 public schools and fall enrollment. The resulting estimate of salaries/pupil rose only slightly from $6,546 in March 2004 (in $2015, adjusted by the CPI from $5,195 current dollars) to $6,783 by March 2015 (the latter figure is derived from NCES projections for the last few years of fall enrollments and current expenditures per pupil).

Multiplying these two series together, I find that employer contributions for retirement doubled (in real terms) from $501 per pupil in 2004 to $1,036 in 2015, as depicted in the graph. Virtually all of the increase is due to the rise in retirement contributions as a percent of salary – the contribution rate, as conventionally defined by DB pension plans – from 7.7 percent to 15.3 percent.

The rise in per pupil pension costs nationally masks wide variation. In some states these costs are not rising, such as Ohio, due to benefit reductions, and Wisconsin, due to Governor Walker’s Act 10, requiring that employees split the costs with districts. In other states they are rising far more dramatically than the nation as a whole, from a few hundred dollars per pupil to over $2,000, as in Pennsylvania and Connecticut.

The causes of the rise vary by state, but they generally represent the rise in payments to amortize large unfunded liabilities. That is, the rise in employer contributions mainly represents costs that have been deferred by various means for benefits previously earned by teachers and other personnel, many of whom have long since left the schoolhouse. How to deal with this burden is much debated, but the first step is to recognize its extent.