Not All 401(k) Plans Are Created Equal

My colleague Jason Weeby asked me what I thought of a Michigan legislator's plan to close the state's current retirement plan and instead offer all new teachers a 401(k)-style plan. I had two:

1. "401(k)" is occasionally thrown out by pension advocates as a scary alternative to traditional pension plans. But not all 401(k)s are the same, and they could be structured in a way that would offer teachers greater portability than current pension systems while placing more teachers on a path to a secure retirement.

The term "401(k)" comes from the federal tax code, but it's often used to describe a broad category of defined contribution retirement plans, where the employer defines how much they plan to contribute in a given year and individual employees have their own accounts that they can take with them. But beyond that basic structure, they vary considerably in terms of how much the employer contributes, where the money is invested, or how much guidance they offer employees. This stuff matters immensely. A recent Center for Retirement Research brief shows just how much. The chart below from their brief starts with an employee making smart choices from the time he was 29 in 1982 until he turned 60 in 2013. He started young, contributed regularly, balanced his investment portfolio, and never cashed out. Those actions would net him $373,000 in retirement savings. But if he paid high fees on his investments that would cut his total down to $314,000. If, rather than transferring the entire balance when he changed jobs, he cashed out a little bit, that "leakage" would bring his retirement savings down to $236,000. Last, if he didn't contribute every year ("Intermittent contributions") and he waited to start saving well into his 30s (labeled "Immature System" in the graph), his total savings would drop to only $100,000. That's $273,000 in retirement savings in lost retirement savings. 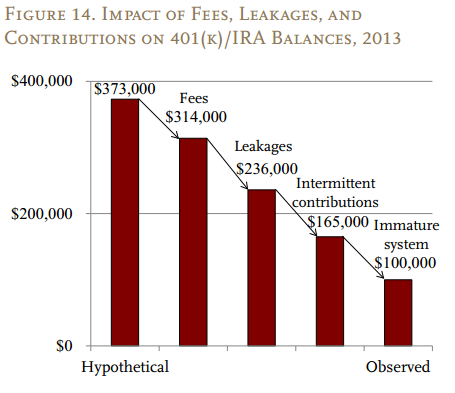 Luckily, 401(k) plans are taking steps to address these problems. Due to federal rules requiring plans to improve their offerings and research showing that "nudges" and default options are powerful influences, plans have adopted smarter rules that protect individuals or at least encourage them into better savings habits. More plans automatically enroll workers, they recommend employees gradually increase their contributions over time, and they offer low-fee and life-cycle funds that help individuals make smarter investment decisions. And rather than being indifferent to what employees do with their savings when they leave, more plans reccommend individuals roll over their balance into a new retirement account or convert the entire balance into an annuity that will pay them a guaranteed amount throughout their retirement years.

By my read, the Michigan 401(k) proposal appears to do none only some of these things. It would offer only a 4 percent employer matching contribution (with no minimum) and include none only some of the protections mentioned above (*Correction: The state's defined contribution plan does offer low-fee and life-cycle investments, but it does not discourage leakage or establish sufficient savings levels as the default for new teachers.) Based on what we know about individual decision-making, it would not be a very good plan for teachers. Contrast that with Oklahoma, which recently passed a law shifting new state employees into a 401(k)-style plan with minimum employee and employer contributions and a matching contribution of up to 7 percent. Oklahoma would also support individuals to make smart investment decisions and encourage them to convert their savings to annuities rather than letting it "leak" out. An Oregon task force just released recommendations for a plan with many of these same protections. These examples suggest it's possible to design a 401(k)-style plan that supports workers in meeting their retirement savings needs.

Teachers are the largest class of professional workers in the country so it's of national interest that they have a strong retirement plan. Today's pensions systems aren't meeting that goal, but change from traditional defined benefit plans need not be unworkable or unfavorable to teachers.

2. Michigan currently offers teachers a choice between a hybrid plan (which combines a traditional pension component with a very small defined contribution element) or a standalone, slightly larger defined contribution plan. The hybrid plan is the default option for teachers and isn't serving them well, but at least they have a choice. The proposed legislation would eliminate that choice altogether. If Michigan teachers truly believe that they're going to stay in their job for 25 or 30 years, the current hybrid plan might be their best option. This applies to only about 27 percent of Michigan teachers (or about 20 percent nationwide). But for the large majority of teachers--who don't know how long they'll teach, or don't know how long they'll teach in a given state, or just aren't confident that life won't get in the way--may want to choose a retirement plan that's more portable. Giving teachers a choice is a good thing, but with the odds and percentages at play, the default should be a well-structured, portable option. A well-structured 401(k) plan could meet that criteria; this one in particular would not.