I'm a Public School Teacher. When Should I Retire?

Although the decision about when to retire is a personal one involving many factors, in most states there is a very clear window during which you can maximize your retirement wealth. As explained below, you can receive the most total money in pension benefits by following two rules: stay in the same pension plan for as many years as possible, and then retire at your state’s normal retirement age.

In the 401(k)-style plans common in the private sector, your pension wealth is tied directly to your contributions, the contributions of your employer, and the investment returns earned by these contributions. In most states, however, public school teachers receive a Defined Benefit (DB) retirement plan. In these plans, pension wealth is instead tied to a formula that calculates a monthly defined benefit based on years of service in that retirement system and final average salary (usually calculated as your average salary over the three to five highest-earning years of your career in the system). These two numbers are then multiplied together, and a small percentage of that factor — usually around 2% — becomes your monthly defined benefit.

These pension rules offer some clear guidelines about how to maximize your pension wealth. First, you should work as long as you can in one system. Because your defined benefit is calculated based on years of service in a system, switching systems will most likely leave you with two small benefits that, when combined, are less than the one large benefit you would have gotten if you had remained in one plan for your entire career.

Financially, it also makes sense to avoid retiring much later than the normal retirement age. You get your pension benefit in the form of yearly payments rather than as a lump sum of cash. This means that as you age, even if you receive a higher amount of money per year, you will have fewer years of life to receive these payments.

For example, imagine that you can either retire now and earn an annual retirement benefit of $50,000, or retire in five years and receive a retirement benefit of $60,000. By waiting five years to retire, you would lose more than $250,000 in pension wealth, then earn an additional $10,000 every year after that (not including inflation). This means that you would have to live 25 years past that later retirement date in order to receive the same amount of money as you would have if you had retired at your state’s normal retirement age. Therefore, you should keep in mind your health at your time of retirement and decide whether the slightly higher pension payments are worth the loss of years of  annual payments. (This advice is merely about maximizing one’s pension wealth and does not consider a teacher’s desire to continue teaching.)

All of these factors combined create a structure in which pension wealth remains low throughout most of a teacher’s career, spikes at the state’s normal retirement age, then slowly declines from there. So an ideal window to retire begins at your state’s normal retirement age and continues for a few years after that. A typical plan provides a trajectory of pension wealth that looks something like the graph below: 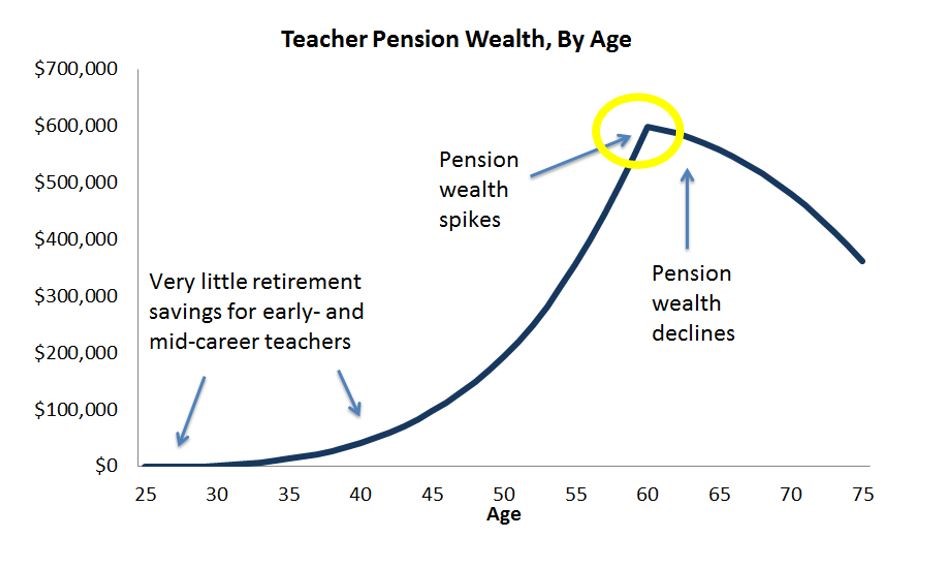 With an understanding of this pension structure in mind, you should be able to make an informed decision about what retirement age is best for you and your family. For more information about your state’s pension plan, check out our state teacher pension plans page here, or look at your state pension plan’s member guide that can be found at your plan’s website. And for more information about how to calculate a teacher pension, read our explainer post here.