Illinois Turns Its Back to the Future

An Illinois judge has ruled unconstitutional the state's 2013 law that decreased cost-of-living adjustments, capped pension amounts, and raised the retirement age for workers who are currently under age 45. For background, read my interview with Illinois state Daniel Biss, one of the co-sponsors of the 2013 legislation.

The state will appeal the ruling to the Illinois Supreme Court and what happens there is best left for legal minds. But what's clear is that this ruling is potentially very problematic for new teachers and those who aren't yet teaching. Because states like Illinois have constitutional protections that lock in benefits for existing workers, the only way for state and local governments to address funding problems is to target new workers. Nearly every state has created less generous plans for new workers, plans that will require new teachers to pay more money up front, remain in their jobs longer before they “vest” into the system and qualify for even a minimum benefit, and work longer before they retire with full benefits. This situation can’t last forever.

Illinois can't really cut much more. In 2010, faced with extreme under-funding of its pension system, and bound by the constitutional constraints, the state created a new plan for new workers. Robert Costrell and Mike Podgursky calculated what those benefits actually looked like for new, 25-year-old female teachers. The figure below compares the pension benefit offered to existing workers as of December 2010 (the dotted line) to the pension plan offered to new workers hired after January 1, 2011 (the solid line). 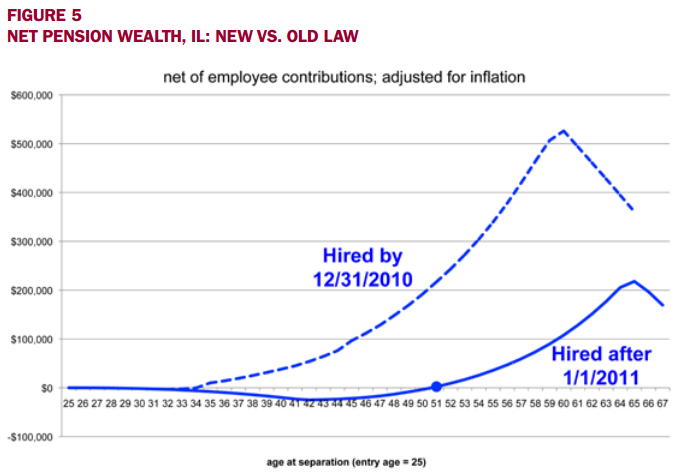 As Costrell and Podgursky write, "a 25-year-old entrant would not accrue positive net pension wealth until age 51; if she left teaching before then, she would be better off cashing out her contributions than leaving her money in for her pension." In a profession like teaching with relatively high turnover, only a fraction of teachers will stay this long. In practice then, Illinois is  taking a no-cost loan from the majority of its new teachers. If the state has to cut costs in the future, it will have to create even less generous plans for future teachers. No one, including the courts, is looking out for them.