Today is Equal Pay Day -- our annual reminder that women do not receive equal pay for equal work. Although most educators are women, education nevertheless struggles with gender-based salary inequities. Pay gaps persist even though most school districts use a fixed salary schedule based on years of experience and educational attainment. Among teachers, principals, and superintendents, researchers have documented gender wage gaps. In 2018, I analyzed Illinois teacher salary data and found that across the state female teachers earn on average 92 percent of what male teachers earn. Race further complicates the problem. For example, Hispanic women earned about $4,000 less than Hispanic men, and white women earned $10,000 less than white men.

A new study by Grissom et al., out of the Annenberg Institute at Brown University found similar patterns of pay inequities among principals. Using educator-level records, the researchers found that school principals in Missouri earn around $1,400 less per year than their male colleagues. And using the nationally representative Schools and Staffing Survey (SASS), they found that across the country female school leaders earn $900 less than male ones. Gender-based salary gaps can only be “partially explained” by career path choices, suggesting gender discrimination contributes to male-female pay differences in school leadership.”

If you take into consideration an educator’s total compensation, including their pensions, the inequities increase considerably. As I wrote previously, any gaps in salary are reflected, and often are amplified through statewide teacher pension systems.  As shown in the graph below, women qualify for lower value pensions at every stage in their career. 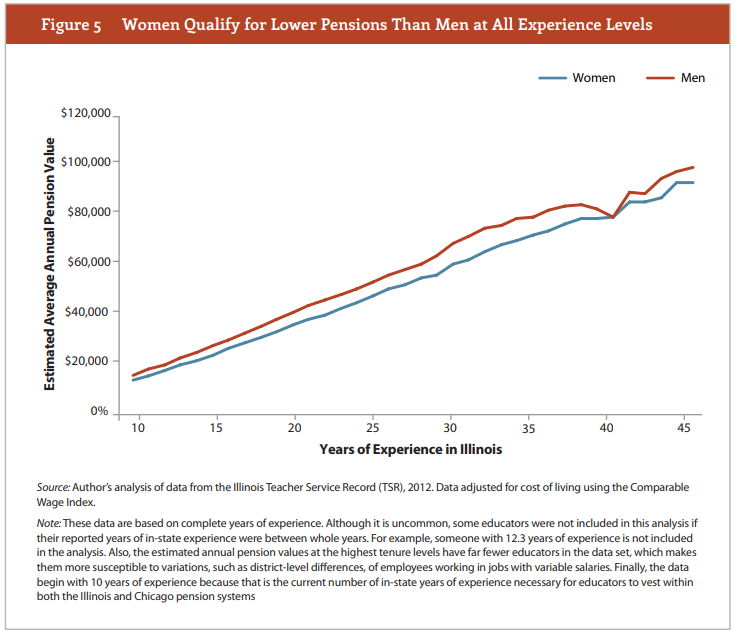 After 30 years, about the time many educators will be considering retirement, the gender pay gap is about $10,000. If two typical educators, one female and one male, retired after 30 years, the man would receive $8,000 more in pension benefits each year. After 10 years in retirement when they’re both about 70 years old, the male educator will have collected $80,000 more in pension benefits than his female colleague.

It is critical that we better understand the causes and impacts of gender-based pay disparities in schools. However, we must also remember that the salary gap is only part of the disparity in total compensation.