Do Pension Plans Help Retain Teachers? Not According to the Plans Themselves

My colleague Kelly Robson and I have a new paper out in Education Next this week looking at the interaction between pension plans and teacher retention. We had two main findings. One, pension plans themselves do not assume that teachers change their behavior in order to qualify for a pension. And two, while there may be some late-career retention effect as teachers at the end of their career hold on in order to maximize their pension, state pension plans assume a much larger "push-out" effects that causes large numbers of veteran teachers to retire at relatively young ages.

I'll come back to the second point in a subsequent post, but I'll start with the lack of early-career retention effects. If qualifying for a pension were an incentive, we should see teachers change their behavior in order to "vest" and reach their state's minimum threshold. That is, teacher turnover rates should flatten out in the years leading up to the vesting period, and then spike upwards, at least somewhat, immediately afterwards. For example, if teachers in a given state qualified for a pension after five years, teachers in their fourth year should be marginally less likely to leave their jobs as they near that point. After all, these teachers would qualify for a guaranteed stream of pension income every month upon retirement if they stay just one more year. Then, some teachers who held on to year five solely to qualify for a pension would leave the profession and retention rates would rise.

We tested this empirically using the pension plans' own financial assumptions. Each state pension plan publishes “withdrawal” rate tables estimating the percentage of teachers who will leave (aka withdraw from) the pension system in a given year. State pension plans publish these withdrawal rate assumptions in their Comprehensive Annual Financial Reports (CAFRs). Though these rates reflect each state’s predictions for the future, states update them regularly based on their own historical patterns.

States present their withdrawal assumptions in tables similar to the figure below, which is an example from Alabama. The table can be interpreted as follows: For 25-year-old female teachers with 0 years of service, Alabama assumes that 14 percent will leave by the end of their first year. The state assumes another 14 percent will withdraw when this cohort of teachers is 26, 27, 28, and 29 years old. When they reach age 30 with five years of teaching experience, the state assumes the annual withdrawal rate for this group drops to 5.8 percent. 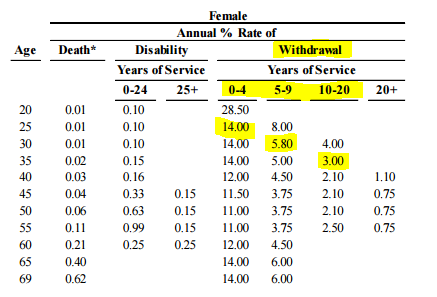 This table can be used to determine whether Alabama believes its 10-year vesting requirement to qualify for a pension is shaping teacher behavior. If it were, we should see slightly lower turnover rates in years eight and nine, as teachers hold out for a pension, followed by a small spike in year 10 as teachers who were remaining solely to qualify for a pension finally departed. But that’s not what Alabama assumes. Across all ages and experience levels, Alabama expects withdrawal rates (for non-retirement purposes) to decline the longer a teacher remains in the profession. It does not assume there will be holdouts prior to the pension threshold who leave upon qualifying for it. Again, Alabama is making these assumptions based on its own historical data.

In fact, after looking at every state's assumptions, we could find no evidence of any state pension plan that believes its teachers will systematically change their behavior to qualify for a pension. Instead, teachers become less and less likely to leave the profession (for non-retirement reasons) every year they remain, and there is no indication that qualifying for a pension affects that trend one way or another. Given the large numbers of teachers who leave early in their career, about 60 percent of Alamaba teachers and about half of all new teachers nationwide don't stick around long enough to qualify for a pension. Although they and their employer are contributing large sums of money to the pension plan, they won't earn a pension at all, and the pension plan won't be enough to keep them in the profession. That's bad for those teachers in terms of retirement savings, and it's bad for employers who could have used that money in more productive ways.

In a subsequent post I'll turn back to later-career teachers. In brief, pension plans do appear to exert a limited “pull” effect that keeps some late-career teachers on the job (remember, most teachers have left before then). But pension plans exert an even stronger “push” effect that encourages veteran teachers to retire, regardless of any teacher’s particular interest or ability to continue teaching. Because veteran teachers tend to perform better than a replacement teacher just entering the profession, that has real, negative consequences for students.