Another Hidden Penalty On Teachers

In our recent paper "Friends without Benefits," we used pension plan assumptions for all 50 states and the District of Columbia to estimate that more than half of all teachers won't qualify for even a minimal pension. They'll leave the teaching profession without a retirement benefit at all. Those figures are shocking, but a new report suggests our estimates may actually be too low.

We focused on the question of whether teachers "vest" into their pension plan because it's an important milestone for workers and determines whether they'll qualify for at least a minimal pension when they retire. States set a vesting period, broadcast it to workers, and guarantee at least some retirement income to those who who meet it. Workers can be confident the pension will be there for them in retirement and increase with inflation as they age. That's a nice protection, but reaching the minimum vesting requirement guarantees only a minimum annuity in retirement.

A new Urban Institute brief suggests vesting isn't nearly sufficient. In fact, the vast majority of teachers will leave the profession with less than their own contributions. Figure 1 from the Urban brief (reproduced below) shows an illustrative example of how this works. It looks at a 25-year-old beginning their employment under a hypothethetical (but typical) pension plan. The plan provides an annual pension equal to 2 percent of the worker's final average salary multiplied by years of service. The chart assumes an employee contribution rate of 7 percent, an 8 percent investment return, and a 3 percent inflation rate. The employee vests at five years, at which point they're guaranteed at least some level of pension when they reach age 60, but the minimum pension is not worth very much. 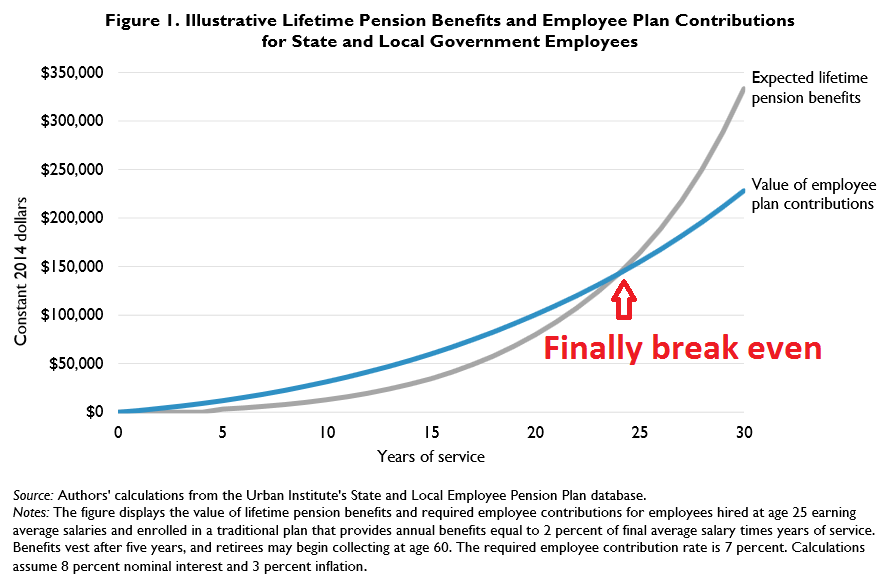 This is merely an illustrative example, but Urban has run the calculations to find the break-even point for every large state pension plan. In the median state, teachers must wait 24 years (!) before their pension is finally worth more than their own contributions.

To put it mildly, this is a long time. Many teachers leave the profession or cross state lines after only a few years, let alone staying put for much longer. Based on our calculations from state pension plan assumptions, the median state assumes that only 23 percent of teachers will stay for at least 24 years.

These calculations are dependent on each plan's particular rules and assumptions, and the chart above relies on an 8 percent investment assumption. That may seem high, but it closely mirrors typical state pension plan assumptions. Besides, Urban has run similar calculations with lower assumed rates of return and still placed the break-even point at about 15 years (see Figure 1 here). Because teachers have such high attrition rates in the early years of their career, the median state assumes that more than 70 of teachers will be gone before even this lower break-even point. The rest will leave the profession with no pension at all, or a pension worth less than their own contributions.