10 Pension Story Ideas for Reporters: My Presentation at the Education Writer's Association 2015 Seminar

Pensions are not just about state budgets and numbers with lots of 0's behind them. Pensions affect real people, and our work here at TeacherPensions.org attempts to explain the ways in which complicated pension issues trickle down and affect the lives of millions of teachers. So when I was asked to give a presentation on pensions at the Education Writer's Association (EWA) 2015 National Seminar, I wanted to use the opportunity to suggest ways education reporters can dig into pension issues in their state. Here are 10 potential story ideas:

1. How are pension costs affecting your state's schools? Pension costs usually don't appear on the education beat, but that doesn't mean pension funding doesn't affect schools. There's wide variation across states, but nationally retirement costs eat up more than 19 percent of teacher compensation. That figure is rising fast, much faster than in other professions. The chart below helps illustrate what it looks like in New York state. Reporters could be asking things like how school district leaders are making budgetary choices or whether teachers know how much money is being contributed on their behalf. 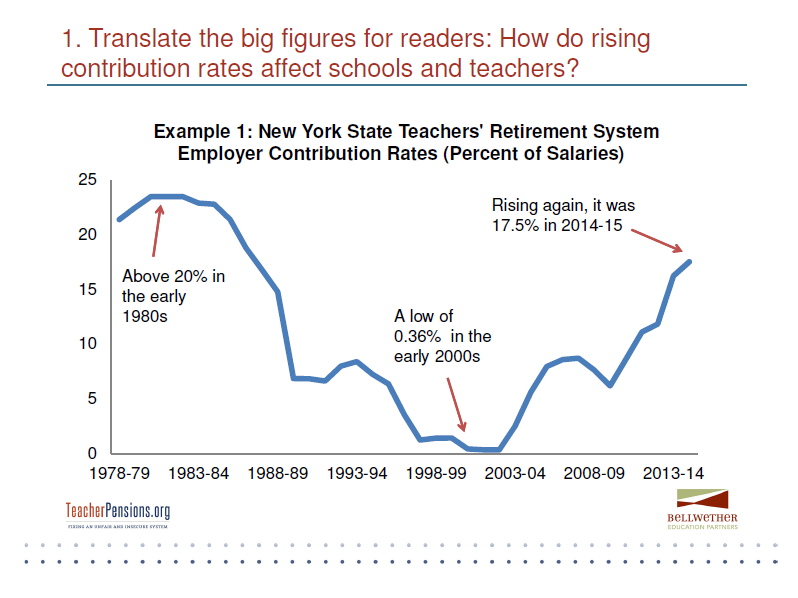 2. What does it mean when a state pension plan has an "unfunded liability?" For budget people, it means the state needs to find new money. But just like other forms of debt, pension debt carries real costs for schools and teachers. As contributions to pension plans are rising, the majority of contributions today are actually going to pay down accrued debt. Nationally, for every $1 that states and schools are contributing to pensions, 70 cents goes toward paying down debt and only 30 cents goes toward actual teacher benefits. The chart below presents an example from Colorado, where 84 percent of today's contributions are going toward debt and oly 14 percent toward teacher benefits. 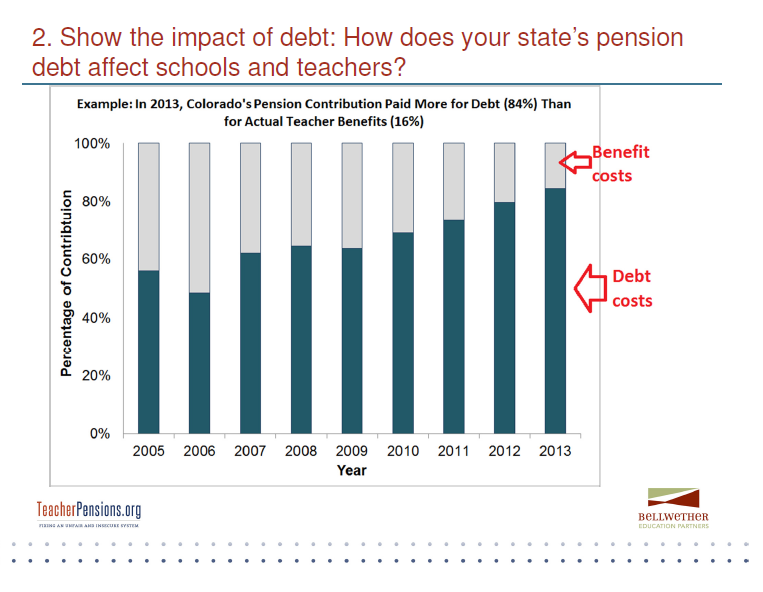 3. Pension plan investments have been in the news recently, but what is your state's investment plan? Most states assume they can earn a 7.5 or 8 percent return on their investments, and states have systematically increased their exposure to stock markets and private equity. The chart below comes from the Pew Center on the States, and it shows how states have over time increased their exposure to risky assets. What does this look like in your state? 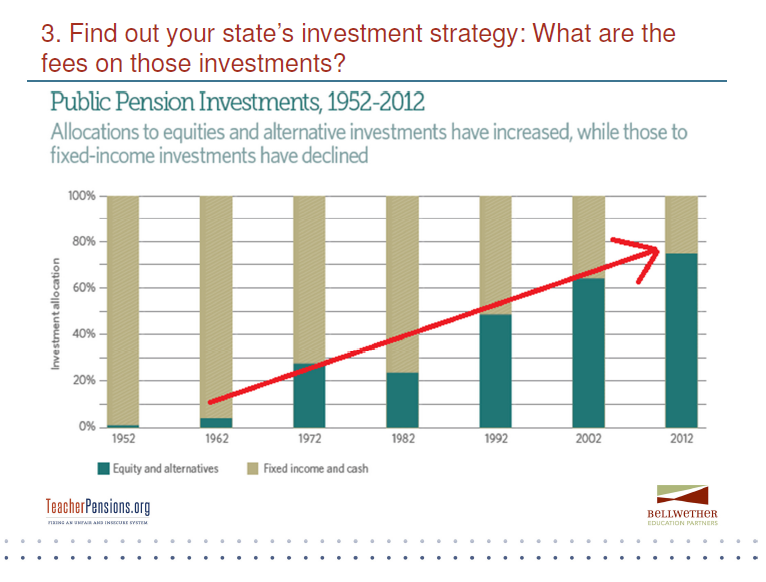 4. Pension plans are a great, untapped source of data. In order to pay benefits down the road, pension plans have to keep impeccable records about their enrolled teachers, including how long they stay in the profession, how much money they earn, and when they retire. The next time there's a story about rising or falling teacher retention or retirement rates because of X, check the pension plan data to make sure this is reality. The graph below pulls in 10 years of retirement data from the state of Illinois. Although there may be certain teachers leaving the profession in Illinois because of things like the Common Core (adopted in 2010) or new teacher evaluations (implemented in 2013), the data do not support the notion that waves of teachers are retiring because of these developments. 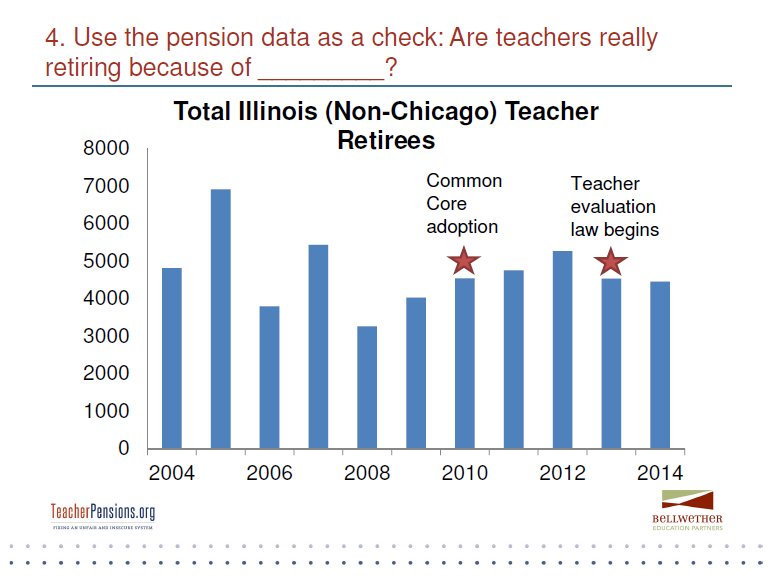 5. Pension plans are a treasure trove of data even for things like teacher retention rates. In order to estimate how much money they'll need to pay benefits down the road, pension plans make assumptions about how long teachers will stay in the profession. (Every few years they test their assumptions against their actual observed data.) We've used those projections to estimate how many teachers will stay for 5, 10, or even 30 years. Reporters could run similar calculations to let readers know how their state compares.

6. Education news coverage can occasionally get lost in a vacuum. It's important to remind readers just how big and important the teaching profession is to this country and to individual states. With more than 3 million public school teachers, they're the largest class of college-educated workers nationwide (and probably in your state as well.) Things like how well teacher retirement plan are working is not just an issue for individual teachers--they're also a big part of state economies and it matters whether they have sufficient retirement savings. 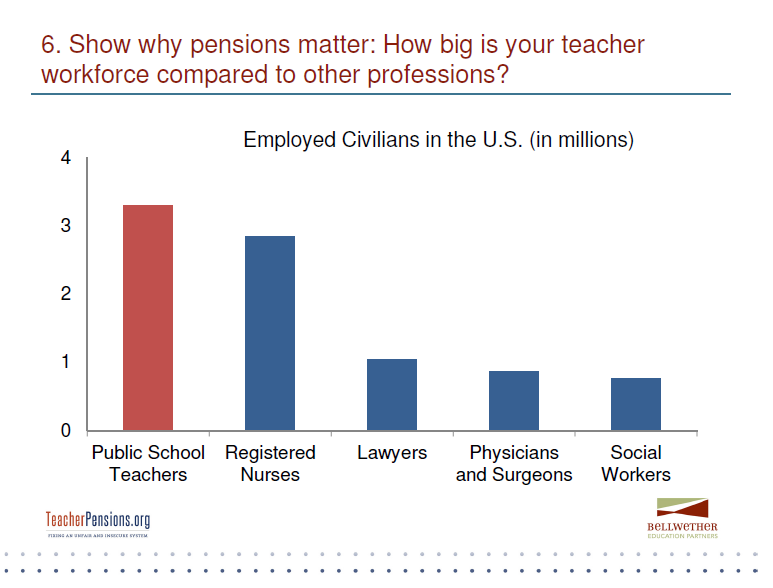 7. Reporters should steer away from reporting the simple "average" teacher pension plan, because the average hides a lot of nuance. As we've estimated, about half of new teachers won't qualify for a pension at all. They won't earn a pension and will leave their public service without any employer-provided retirement benefit. Even among those who do earn a pension, the amount will vary tremendously. As a reporter, try to find individuals who represent all sides of this story, not just the few lucky ones who qualify for the best, "gold-plated" pensions. Tell the story of all the different types of people who work in your state's public schools (there are great examples here). 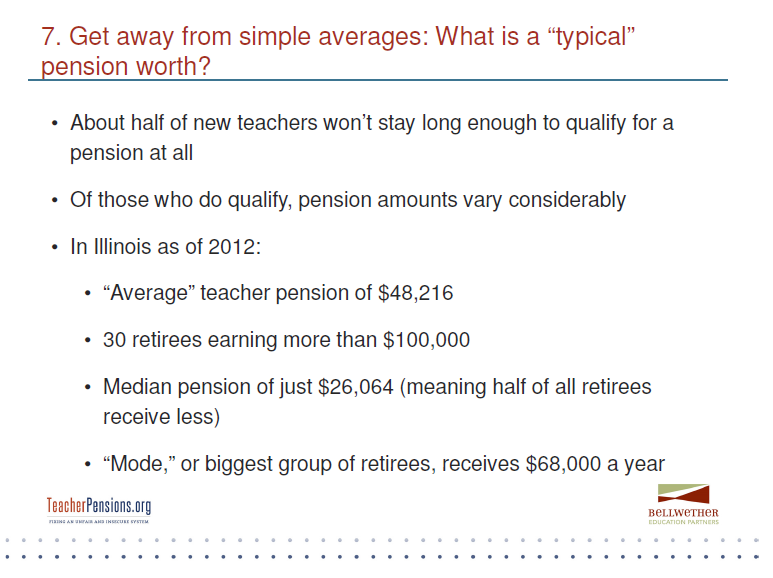 8. Reporters should make sure the story is about individuals. That will make for a more compelling story and do a better job enlightening readers about how your state's pension plan is (or is not) providing secure retirement benefits to all teachers. The chart below shows the rate at which teachers leave the typical state (the dark blue line) set against the rate at which they earn retirement benefits (the tan line). Does your state have this divergence between the number of teachers who stick around and the amount of benefits they earn? How does your state compare to other states? Do teachers know when and how they earn pension benefits, and do they change their behavior accordingly? 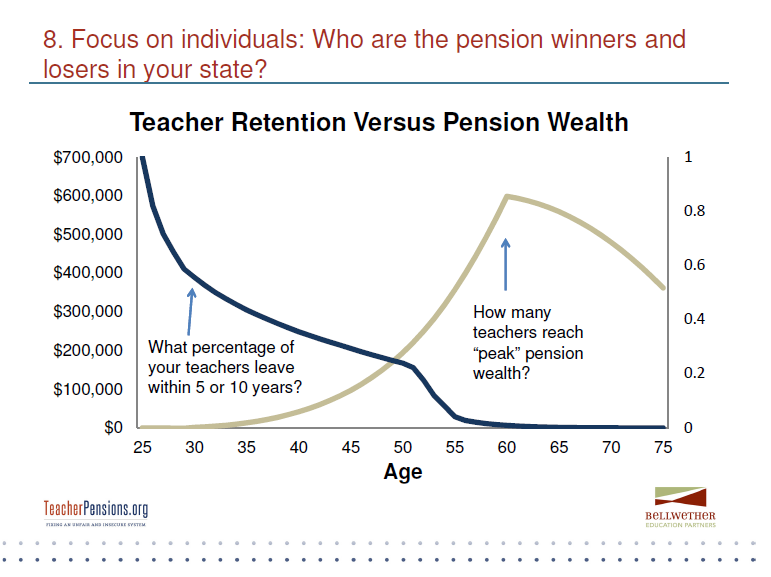 9. The best news stories have some tension. There are tensions at play in teacher pension plans. Because pension plans reward those who stick around in one place for a long time, they let younger, more mobile workers subsidize older and more stable workers. And because pension plans are based on a formula that factors in salary levels, employees with higher salaries (like district superintendents and administrators) tend to earn disproportionately large benefits compared to teachers. 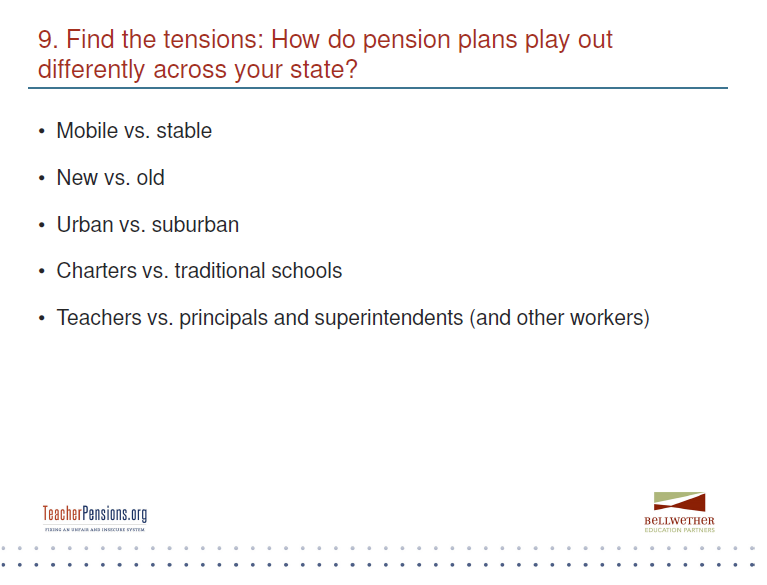 10. Nowhere do tensions play out more than in the generational divide. Because states have moral and sometimes legal protections against changing retirement benefits for existing workers, when states are pressed into tough budget climates they are forced to adopt particularly steep cuts on new and future teachers. They do this through the creation of new "tiers" where workers hired after a certain date are placed in a different, worse plan than those who came before them. Nearly every state has multiple tiers now. Teachers may be working side-by-side in the same school, and paying the same contribution rates, but earning very different retirement benefits. Do teachers know about this? How do new teachers feel about subsidizing the retirements of other teachers? What about teachers hired just on or before the date when the old tier started and the new one began? Will this affect the teaching profession writ large, making it harder to attract and retain good teachers? 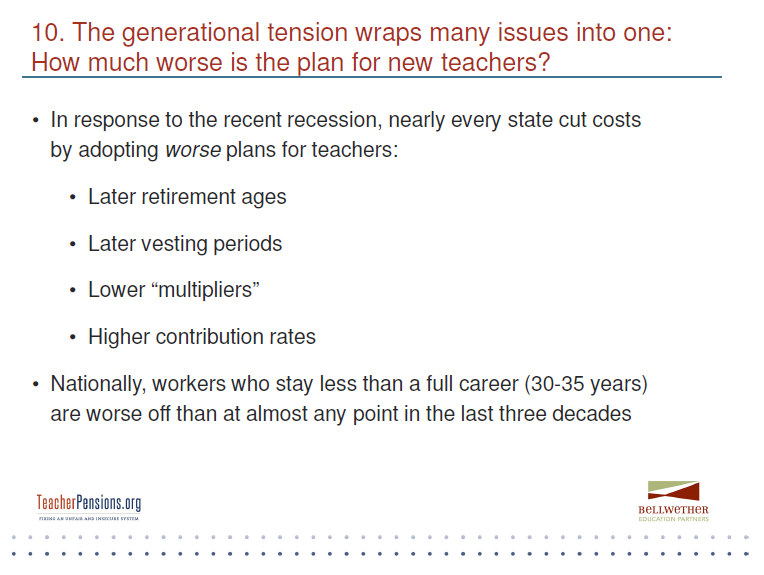 Those are just some of my ideas. For any reporter interested in more information, or to talk through their own story ideas, please feel free to email me at chad-dot-aldeman-at-bellwethereducation-dot-org.