Traditional defined benefit pension plans are unique in that they require budgeting for long-term costs. Present-day conditions can make those plans look either better- or worse-off than they really are, forcing strong reactions from policymakers. For teacher pensions, this can force school districts to pay large and unexpected costs.

New York provides an excellent example of how these fluctuations happen. Last week the New York State Teachers' Retirement System (NYSTRS), which provides a defined benefit pension plan to public school teachers and administrators outside of New York City, announced it was raising the required employer contribution rate* from 16.25 to 17.53 percent of payroll.

To put New York's 17.53 percent rate in historical context, I created the chart below to show the considerable peaks and valleys the employer contribution rate has reached over time. In the late 1970s and early 1980s, school districts contributed more than 20 percent of teacher salaries into the state defined benefit pension plan. That rate declined for much of the next two decades, and, following strong returns in the stock market of the late 1990s, the rate hit a low of 0.36 percent (!) in 2001-2 and 2002-3. Two recessions later, the required employer contribution rate will climb to 17.5 percent next year. 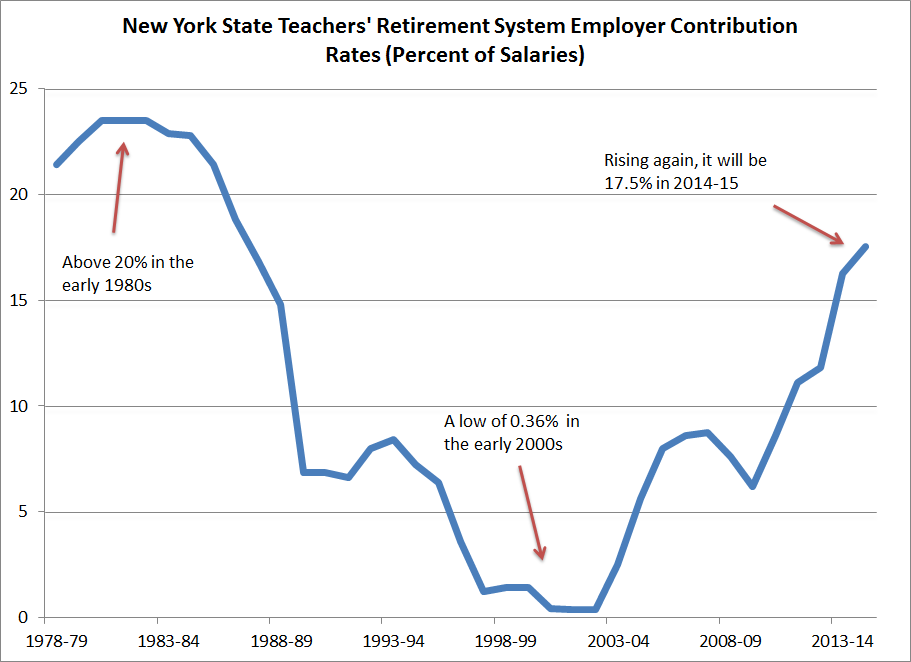 Districts could offer more predictable retirement benefits. Consider that New York's 17.5 percent rate will be about 7 percentage points higher than what comparable workers in the private sector receive for their retirement. For the entire NYSTRS system, the average employer contribution rate over the last 37 years has been 10.9 percent. If New York school districts had a stable 10.9 percent contribution rate, their budgets would look a lot different. For example, the Buffalo Public Schools budgeted slightly more than $160 billion in teacher salaries for the 2012-13 school year. Assuming the same budget totals in 2014-15, Buffalo will be forced to pay $28.1 million in teacher pension costs. If, instead, the city contributed only 10.9 percent into employee retirement, Buffalo would reduce spending on teacher pensions to $17.5 million. If given a choice, Buffalo could have used that $10.6 million difference to give each of its 2,822 teachers a base salary raise of $3,756, or it could have employed 187 more teachers.

Unfortunately, districts have no choice in these decisions. NYSTRS sets the mandatory contribution rates 16 months in advance in order to allow some time for planning, but district contributions are deducted automatically from their state aid for schools. Districts have no say in the contribution rates, and they can't negotiate the rates with their teachers' union. If teachers wanted a different allocation between salaries and retirement benefits--if, for example, they wanted higher salaries in exchange for less-generous pensions--they would have no way to accomplish it at the local level. The unpredictable nature of pension contibutions has a real consequence on school district budgets and, therefore, on teachers.

*NYSTRS determines an annual employer contribution rate based on how well the plan is funded. If the system has enough money to cover benefits in the future, it's considered well-funded and the plan would set a low contribution rate. If the plan has less than it needs to pay future benefits, it must save more money today in order to pay benefits in the future. Employees also contribute to the fund; depending on when they joined, most members contribute between 3 and 6 percent of their salary. Nearly every state has increased employer and/or employee contributions in recent years.