Teacher Turnover Rates Are Down, Not Up

On the Diane Rehm show this week, I noted that the most recent data show that teacher retention rates are up, not down. This doesn't fit with conventional wisdom about the teaching profession, and several people have since questioned my source, because how can that be, what with the Common Core, new teacher evaluations, The War on Teachers, etc.? Even on the program, Stanford University professor Linda Darling-Hammond directly contradicted me, saying, "Our attrition rates went from 6 percent to about 9 percent recently..." Darling-Hammond would have been more or less correct if she had made that statement 10 years ago, but not anymore. The truth is that teacher attrition rates fell slightly during the recession and have kept falling.*

You don't have to take my word for it. Here's the latest data from the National Center for Education Statistics. Since 1988, NCES has tracked the number and percentage of public school teachers who stay in their current school, move to another one, or leave the profession. Although the "mover" and "stayer" rates are relevant to schools--all turnover causes disruptions and may lead to higher recruitment and training costs--the "leaver" rate is the key one for this discussion. As Darling-Hammond noted, the leaver rate did increase, from 5.6 percent in 1988-89 to 8.4 percent in 2004-05. But it fell to 8.0 percent in 2008-9 and then to 7.7 percent in 2012-13. 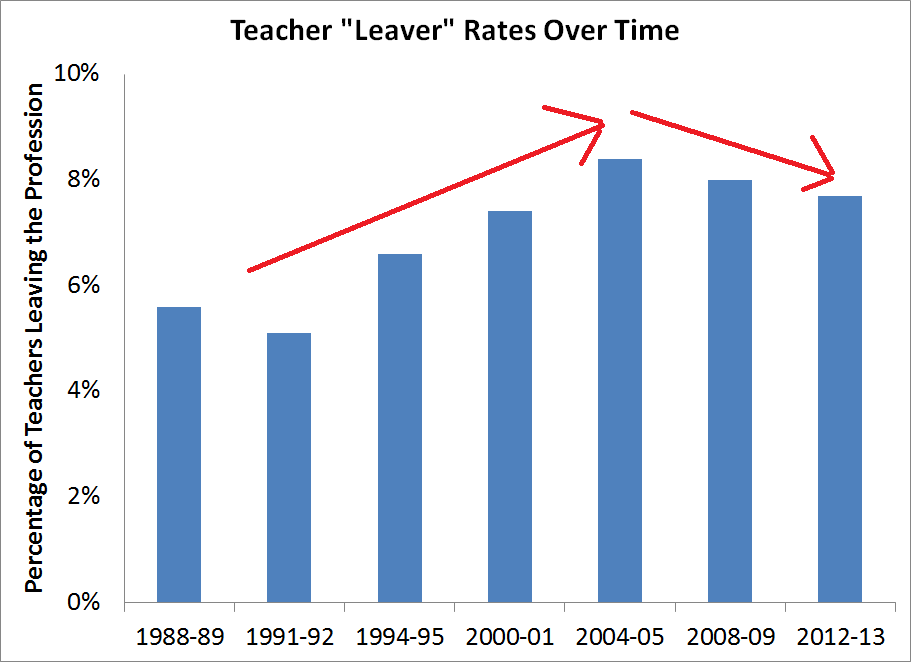 The data simply don't support the notion that teachers are leaving schools in droves in response to recent education reforms.** In order to fit the narrative that teachers are leaving because they feel less respected and less satisfied with their jobs today than they were in the past (a narrative that doesn't fit with actual survey data), we should be seeing a mass exodus of public schools teachers. But we're not.

What's far more likely is that large, macro trends are at work here, just as they are in teacher preparation. Throughout the economy, workers have become more mobile over time. That helps explain the long-term rise in the teacher "leaver" rate. Workers also tend to be especially mobile during good economic times and less willing (or able) to change jobs during recessions. That would explain the recent drop in teachers leaving the profession. The magnitude and timing of these forces might be different for teachers than for other workers, but teachers aren't immune from basic economics.

What will happen in coming years in the broader economy or in the teaching workforce is anyone's guess. The next round of data could show that we're back on the longer-term trend of rising attrition rates. In fact, that would fit fairly neatly with an improving economy and the emerging stories of teacher shortages. No matter what happens in education policy, I'd be willing to place a strong bet that teacher employment trends will continue to track the broader economy fairly closely.

*This is different than any changes over time, but there's also new evidence that longer-term teacher attrition rate was never as high as commonly thought. The estimate that "half of all teachers leave within five years" is definitely not true today and probably never was. Once you count teachers who come in and out of the profession or change schools, the rates look even lower.

**The NCES data do suggest that older, more experienced teachers saw the biggest increases, but it's unclear if that's relevant to policy or just an artifact of the Baby Boom generation nearing retirement age.