The following is a guest post from James V. Shuls, Ph.D., an assistant professor of educational leadership and policy studies at the University of Missouri – St. Louis and a distinguished fellow of education policy at the Show-Me Institute. Follow him on Twitter at @Shulsie.

Pensions – once a topic only discussed by boring economists and old curmudgeons, are increasingly being discussed in political circles and popular publications. For example, last month The New York Times published “Bad Math and a Coming Public Pension Crisis,” which detailed how wrongheaded actuarial assumptions can wreak havoc on a pension plan’s financial health. As the article states, “The recommendations made by pension actuaries, like which mortality table to use, are largely hidden from public view, but each decision ripples across decades and can have an outsize effect.” In a recent paper with my colleague Michael Rathbone at the Show-Me Institute, I analyze another aspect of public employee pensions that can have a significant impact on a plan’s financial health, but often remain out of sight – pension investments.

Using data on four defined-benefit public school pension systems in Missouri, we analyzed the shift in investments between different asset classes from 1992 to 2014. This work follows a 2014 report by Pew Charitable Trusts and the Laura and John Arnold Foundation which analyzed aggregate economic and investment data from public employee pension systems. Similar to the Pew report, we found that Missouri’s teacher pension systems have shifted to riskier assets. 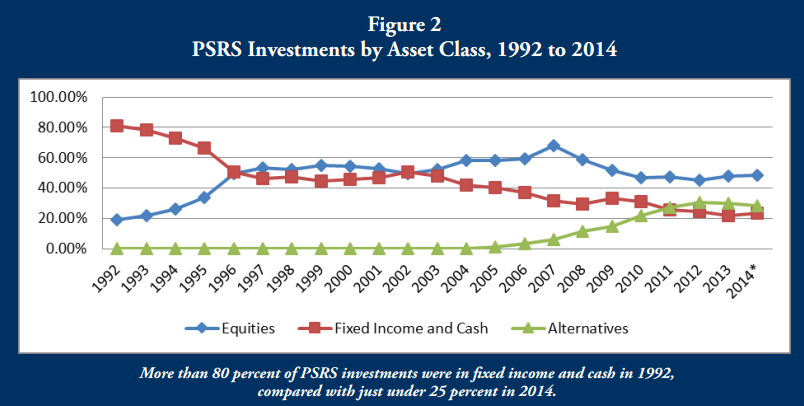 There is nothing inherently wrong with investing in riskier assets; indeed, riskier assets generally offer greater returns. However, they also offer greater volatility. This is another hidden problem which could spell disaster for public employee pensions. If the investments fail to generate the expected returns or even lose value, pension systems can lose a significant amount of money. Meanwhile, benefits for retirees are fixed, predictable, and effectively riskless. Despite this imbalance between riskier investing and guaranteed benefits, PSRS and the other Missouri teacher retirement plans continue to use high expected rates of return of 8 percent.

The findings of our paper reiterate the need for greater transparency and oversight of public employee pensions. For starters, plan actuaries should provide multiple funding scenarios using various expected rates of return, including what most economists agree is the risk-free rate--4, not 8, percent. This would give policymakers greater information in determining the appropriate contribution levels.

The need for greater caution in pension assumptions in Missouri is underscored by the fact that PSRS teachers are not part of Social Security. This means most Missouri teachers rely solely, or primarily, on their pension. If we want to ensure that teachers receive their promised benefits, we must keep a watchful eye on all of our plans assumptions, investments, and contributions. If we do not, we may hasten the “coming pension crisis.”