With school districts across the country laying off thousands of teachers and other employees, it might be hard to focus on something as long-term as retirement benefits. But layoffs are particularly harmful to workers covered by teacher pension plans.

Let's use Massachusetts as an example. As Daarel Burnette II and Madeline Will reported in a recent story for Education Week, "the Massachusetts Teachers Association estimates that more than 2,000 teachers and education support professionals in that state have been laid off in about 50 districts."

Although the stories don't all specify whether the laid-off workers were unionized teachers or other types of workers, it's likely that most of the laid-off employees were enrolled in a traditional defined benefit pension plan run by the Massachusetts Teachers' Retirement System (MTRS). MTRS has two tiers of benefits depending on the employee's hire date, and workers hired since 2012 are in Tier 2. Since Tier 2 workers must serve for at least 10 years before qualifying for a pension, the reality is that no Tier 2 member has qualified for a pension yet. They are eligible for 3 percent interest on their own contributions, but they are not eligible for employer-provided retirement benefit.

Worse, Massachusetts teachers are not enrolled in Social Security, so they may be leaving their service with very meager retirement benefits.

Even for teachers who are vested in MTRS, the benefit formulas are so back-loaded that employees would need to stay for 25 years or more to qualify for a positive benefit. To see this visually, check out the graph below from the Urban Institute's State and Local Employee Pension Plan database. It shows how retirement benefits accumulate under Tier 2 for hypothetical teachers who begin their Massachusetts teaching career at age 25. The blue line tracks their total benefits earned, and the red line shows the benefits earned net of the employee's own contributions. I've added an arrow where the net benefit turns positive, around age 50. 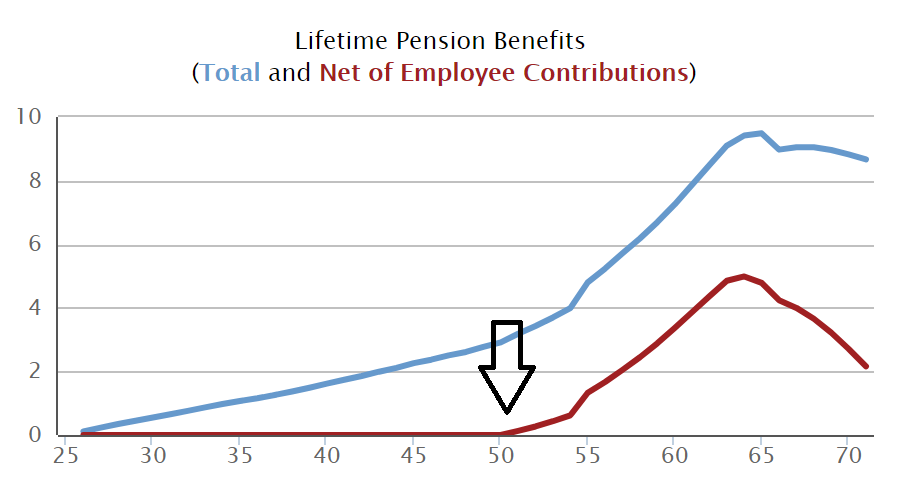 As the graph shows, Tier 2 members won't qualify for a pension worth more than their own contributions until they have served for at least 25 consecutive years. Many of the laid-off Massachusetts school employees are likely to fall short of this mark. In other words, it's likely the case that Massachusetts school districts are laying off workers with no positive retirement benefit, and no Social Security to show for their years of service.

Massachusetts is somewhat of an extreme example, but most states require teachers, especially newer teachers, to serve for 20 or 25 years before qualifying for a pension benefit worth more than their own contributions.