How will teacher retirements change in the midst of COVID-19?

While teacher turnover comes from a variety of causes, retirements typically make up about one-third of all teachers leaving the profession. In this post, I'll look back at what we can say about teacher retirements during a "normal" economic recession and then discuss what's different about the current environment and how that may affect teacher decisions. Based solely on structural factors, we should expect teacher retirements to proceed along normal lines, or perhaps a bit higher than normal.

Teacher Retirements in a "Normal" Recession

About 90 percent of public school teachers are enrolled in defined benefit pension plans, where retirement benefits are guaranteed based on the individual’s years of experience and age. Those plans offer predictable, guaranteed benefit payments regardless of external economic factors. In addition, about two-thirds of public school teachers serve in states or districts that provide health care benefits to eligible retirees.

The combination of guaranteed retirement benefits and health insurance means that public school educators are in a more stable position financially than other Americans who are nearing retirement age. In contrast to teachers, most Americans depend on their own personal savings to fund their retirement and must continue working in order to receive health care benefits from their employer, at least until they turn 65 and qualify for Medicare. While educators or their partners may face other economic hardships, they can at least count on the security of their pension and health care benefits.

Research has found that these structural factors make a difference. Veteran teachers are aware of their pension benefits and time their retirements accordingly. Retiree health care benefits also give teachers confidence to retire at younger ages than they otherwise would.

These factors help keep teacher retirements mostly stable year-to-year. To show a few examples, I've pulled data from teacher pension plans in the three states with the most teachers--California, New York, and Texas. The graphs below come from the annual financial reports of the respective teacher pension plans. In each of the graphs, the vertical gray bars indicate official economic recessions, as declared by the National Bureau of Economic Research. Note that, while these plans are named the state's “teacher” pension plan, they also include other education employees.

The first graph shows the number of people retiring from the California State Teachers' Retirement System (CalSTRS) from 1995-96 to 2018-19. Retirements more or less continued on their prior trajectory during the 2001 and 2007-9 recessions. 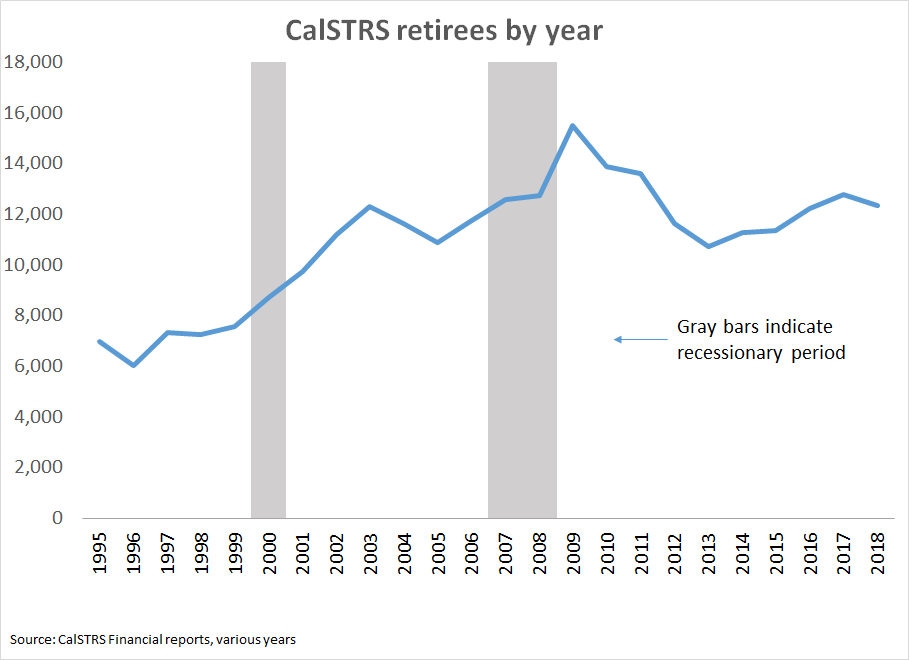 The data from New York doesn't go back as far as what I was able to find for California, but it shows similar trends during the Great Recession. The next two graphs show total retirements from the New York State Teachers' Retirement System (NYSTRS) and the Teachers' Retirement System of New York City (TRSNYC). The state system did have fewer retirements during the 2007-9 recession than it had in years prior, but that was part of a downward trend that began in 2003. The spikes in retirements in 2003 and 2011 could reflect some pent-up interest in retirements, but it's hard to know for certain what's causing those. 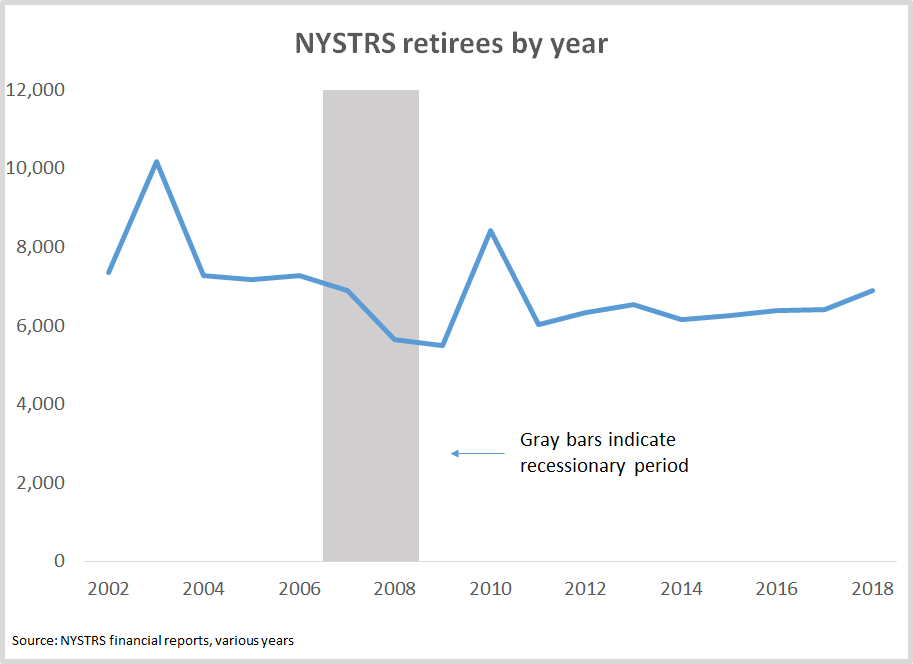 The data on TRSNYC are even more inconclusive. Like the state as a whole, New York City teacher retirements declined every year from 2004 to 2009 and then rose until 2012. 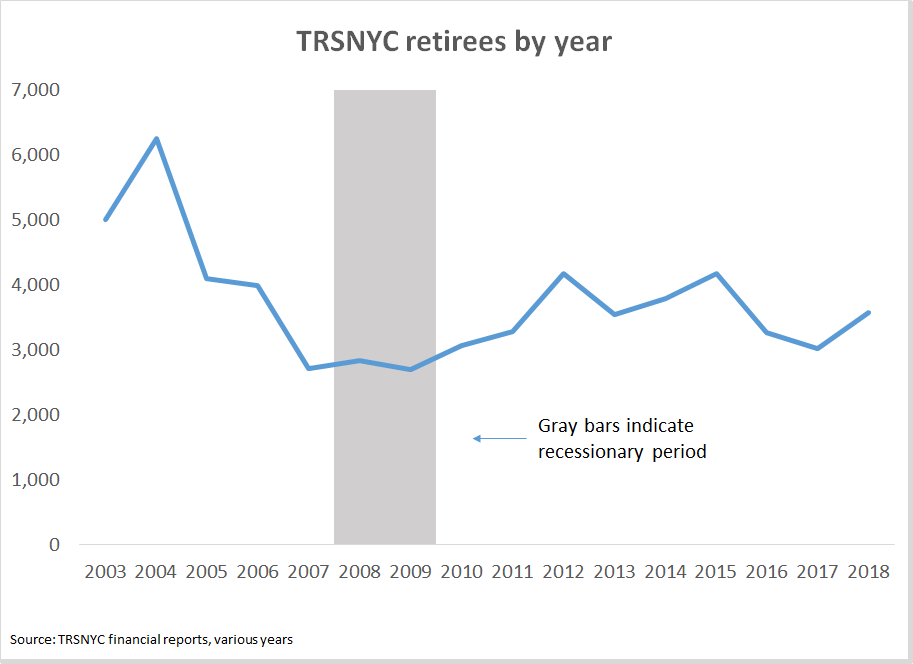 Finally, the last graph shows retirements by year from the Teacher Retirement System (TRS) of Texas. The data for Texas go back to 1997, which allows us to see both the 2001 and 2007-9 recessions. Again, there's no obvious movement during those recessionary periods, although like New York there does seem to be some pent-up retirements occuring a couple years after the official end of the recessions. 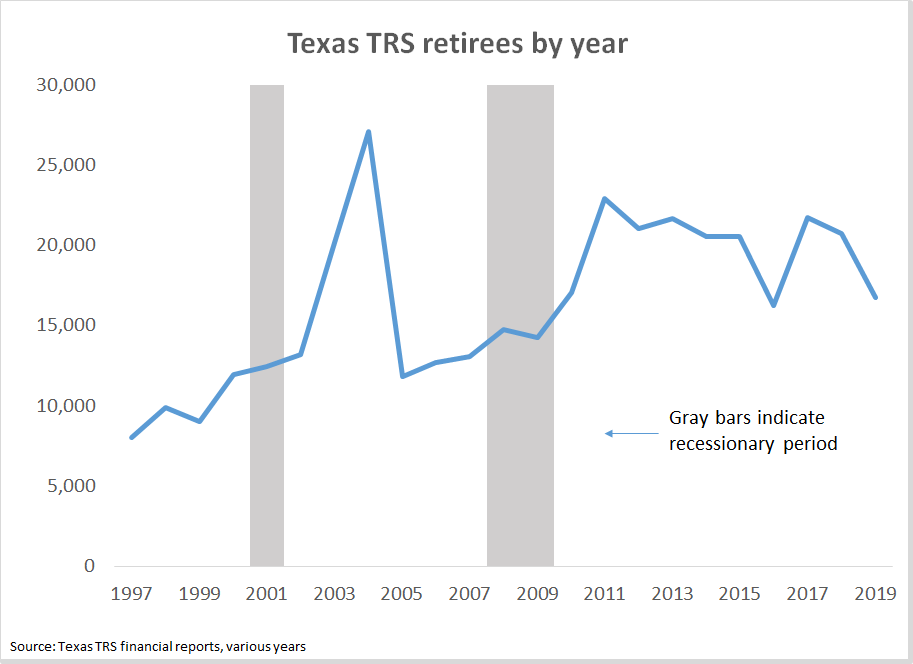 Based solely on economic reasons, we wouldn't expect any dramatic swings in teacher retirement patterns this year, since the current recession only officially began in February. However, our current COVID-19-induced recession is different than a normal economic one. Although we don't have solid data yet, the next section wades through what we might expect.

Teacher retirement numbers this year are likely to depend on a number of factors, including the spread of COVID-19 cases in the community as well as teacher reactions to school reopening plans.

Nearly a third of traditional public school teachers are aged 50 or older and at heightened risk of the virus. Many of those teachers are close or already eligible for normal or early retirement. (See here for a full list of teacher retirement ages by state.)

In addition to the health risks of the virus, the changing and uncertain nature of what “school” will look like in the coming year may influence teacher retirement decisions. Some teachers may see the transition to distance learning as overly taxing and not what they signed up for, while others could be rededicated to the cause. Austerity measures imposed by schools operating on reduced budgets could also contribute to teacher decisions.

At the margins, some teachers may be more willing to start collecting a pension or file for an early retirement benefit this year, but that theory and the survey results will be put to the test as schools reopen. For now, I think it's safe to predict that teacher retirements will proceed at least in line with recent trends, if not a bit higher. Over the next few weeks, we'll be reaching out to the largest teacher pension plans to see if they can share updated data on teacher retirement figures. Check back soon for those results.